Hey and good morning! Sit a spell as I get to share some stories you may have seen or missed but all laced with my commentary. It's

Well now...THAT was interesting. "45" was handed a couple of defeats last week...or so it seems. Now that the Virginia legislature has turned blue Gov. Ralph Northam (D-VA) will propose, what he is calling, "Eight common sense gun laws" that when the legislature was in GOP hands received a full 90 minutes of 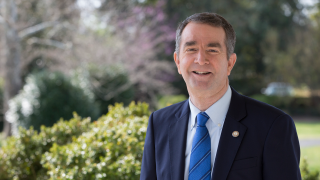 debate before they tanked the bills. Asked if he expected any Republican to cross over and vote for them Gov. Northam was doubtful. "You would think they would listen to the voters rather than the NRA. We'll see."

This is no small deal and one to watch carefully. My bet is that the bills will pass and become a model for other states. BTW Northam is a gun owner...as am I...but we recognize some basic facts that will help keep people safe and start to stem the tide of gun violence.

Meanwhile in Kentucky it's no surprise that Gov. Matt Bevin (R-KY) and a huge supporter of "45", is doing exactly what his "Dear Leader" would want him to do. Telling the world that the election was rigged and there was "election fraud". Even Republicans are urging Bevin to prove it or step aside. Weary.  BTW elected to become the next Attorney General in Kentucky is Danial Cameron. He is the first African-American to be elected to that post. He is also a Republican and calls Sen. Mitch McConnell (R-KY) his mentor. "Moscow Mitch" is pretty pumped and Cameron may well run for the U.S. Senate...in time.

Last week the Iowa Republicans held their annual dinner and "packed" a room with about 600 people. Isn't that nice?  Meanwhile the prior Friday say nearly 14,000 engaged Democrats who are eager to turn this state blue in 2020. 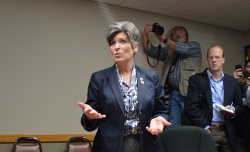 On hand for the "big" GOP event was Sen. Lindsey Graham (R-SC) who offered up all sorts of "raw meat" to the adoring fans of hate and bigotry. Lindsey has flipped so often his nickname should be "Pancake".

Oh, one other thing: Proof that sexual orientation does not mean you will represent the people of your state equally is right here. Exhibit A: Sen. Joni Ernst (R-IA). (Photo - Iowa Starting Line)

Yesterday during a Polk County Democrats Leadership Meeting it was reported that prior to the Tuesday election about 37% of the municipal office holders in the county were Democrats. At the close of the election on Tuesday make that 60%. Seats were flipped all over the county. An interesting note, the Polk County Democrats really did have a hand in that. We not only knocked doors but sent out mailings and made over 10,000 phone calls, chased absentee ballots and more.

There were Democrats on the ballot that did not wish to participate in our efforts. They...lost.

Meanwhile the Polk County GOP is fuming. And come 2020 they will remember our efforts. As in the words of our County Chair, Sean Bagniewski, "Bless their hearts."

Final interesting item for you to ponder. Here is a look at the Polk County Democrats website.

Here, in contrast, is a look at the Polk County Republican website.

Notice that the Polk County GOP is STILL selling tickets to an event that was held in August. Yep, this is the party that wants to always take us back...way...back. They make me giggle...just a bit.

One of the things we discussed during our leadership meeting are ways to reach out to other communities, not only in Polk County but in other parts of the state to see if we can be of some assistance with organization and GOTV. Not to take over but to help in some way. As Iowans know, it's all about organization and follow through. Just a thought. And, yes, we'll remain focused on Polk County as we've got some places where we believe we can help local candidates continue to flip seats and build on our values. 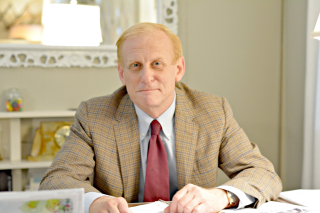 Here is something that will make you sit up straight. GOP political hack Todd Blodgett has an opinion piece in the Des Moines Register this morning that uses all the dog whistles available to argue that requiring welfare recipients to work is really good for Iowa.  He talks about how work will,  "...make folks too tired to make babies they can't afford and lack the ability to properly raise." And he gins up the old stories of people on food stamps buying steak while hard working Iowans purchase "bread, beans and hamburger". (Photo - Globe Gazette)

But it gets worse.

"...beneficiaries of Medicaid and other programs are lazy, irresponsible, entitled and ignorant."

Or this bit of crazy talk: "Electrical power like that created by wind turbines throughout Iowa can be produced, even by illiterate Medicaid recipients; they can jog or walk on treadmills, and/or stationary bicycles which are wired to inverters...so they can send electricity to the power grid."

But then again Blodgett is from Clear Lake, Iowa...in the heart of Rep. Steve King (R-IA) country so it all figures.

Here is where Blodgett is dead wrong. Most recipients of Medicaid are children and the elderly. Others are working two and three low-wage jobs just to get by. You want to talk about being "tired" Todd?  How the hell does that make a strong family.

And who...Todd...is responsible for your reprehensible screed? Your GOP allies who have created a low wage state and who fawn over those that have and seek to punish those that have not.  But I get it. You and your kind fear and loath those who are different than you.

Dog whistles Todd...and I hear them.

I'm about to roll out seven listening posts as I continue my campaign to "Chuck Chuck in 2020". The first will be in December and will focus on guns and gun violence. My goal is to listen to the people of Iowa Senate District 22 about their concerns for safety including suicide, family gun violence, high capacity magazines, and "red flag" laws.

Watch this space and my campaign website for details. I'll be holding one each month for the next seven months. They will center on mental illness, the for-profit managed care issue, voting rights, affordable housing, education, jobs and small business issues. It should be fun and informative.

My goal is to become the legislator that actually works for working families in Iowa. And that, my friends, will make a difference.

Tomorrow is Veterans Day...the reality of those two words are compelling. May the memory of those who died in defence of our nation be bound up and may we recognize their sacrifice...and never forget.