Hope you got to enjoy an extra hour of sleep this morning! Wish I could report that I did. Up at 2:30...I guess really 3:30 and headed to

the office. So much going on these days it's great to get a jump on the day.  And to kick things off...grab your cup of Sunday Morning Coffee and let's roll.

There are few words other than tremendous to describe the Iowa Democratic Party Liberty & Justice Event/Dinner. Nearly 14,000 people packed Wells Fargo Arena. There were Democrats up to the rafters and the excitement was amazing. Sure it helps when there are 13 candidates and their supporters but...WOW!.  The optics were fantastic and the staging was amazing. While it cost plenty to do the event the party raised lots of money...money that will go toward electing Democrats up and down the ballot in November of 2020.

While I've heard each of these presidential candidates at some time during the past few months there were some surprises:

If you were unable to make it you can see the entire, nearly five hours, of the event on CSPAN. Just Google "Iowa Liberty & Justice" and you can enjoy the afternoon.

One other interesting item: Sen. Bernie Sanders (I-VT) opted out of bringing his nearly 1,600 supporters to the arena and instead gave the Iowa Democratic Party $20,000.  He held a rally prior to the speeches. I didn't make it buy my brother who is an avid supporter was there and he said it was "electric". 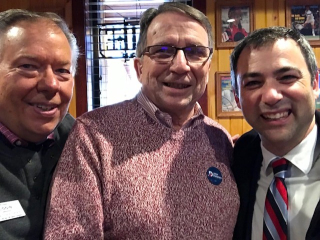 I was with the John Delaney camp when it flashed across the screen that former Congressman Beto O'Rourke bowed out of the 2020 race. The group of nearly 50 people were...stunned. After all there were scores of Beto volunteers all along the route to Wells Fargo Arena. He came into the race with so much promise and crashed out in a dramatic form as he told his supporters who had gathered just yards away from the event that he was done. It was stunning.

While there I ran into a couple of friends. Jared Bernstein and Chuck Offenburger were in the house. Jared was working with me on a project and Chuck has been a big supporter of John Delaney for some time.

My job, that afternoon, was to visit with as many presidential candidate supporters as possible and get them to commit to the group working to support the Democratic Majority for Israel. It was pretty simple really. Go from campaign to campaign and ask caucus goers if they would pledge their support for Israel and a two-state solution working toward peace. It was a great time and worthwhile.

By now you know that the Polk County Democrats have been working hard to turn out the vote for Democrats running for City Council and School Boards. Lot's of folks have asked me why we've taken a stand here and the simple answer is that Democrats have finally gotten smart and realize that for years the GOP has been packing school boards and city council chambers and it was time to work for the values we support. Meanwhile some long-time members of the GOP are telling voters they are Democrats. If you doubt that...you might ask Liz Cox who is running for the WDM School Board. We can't find any switch in her party. But, hey Liz...it's never too late.

I am both honored and humbled to have been chosen as one of nineteen people "who have made a difference" by the Business Journal of Cityview Magazine. The event to honor the 19 folks who were nominated and then chosen by the publication will be on Thursday the 7th. I'm really a bit stunned...but grateful.

I've gotta go!  Sorry for the "half-cup" but working on several items today including my race for the Iowa State Senate. Weekends are made for "Call Time" as well as policy statements and other campaign work.

Finally, if you have a desire to help in this campaign here is a link to my website, LibbieForIowa.com. You know me. You know that I've been working for Democrats for decades. I'm not new to this effort and I'll not need any on the job training once we, together, "Chuck Chuck"  in November of 2020.

One more call out...here is a link to my fund raising site with Act Blue. Any donation is appreciated...and thank you!

Have a great Sunday!