Gather around my friends and have a hot cup of Sunday Morning Coffee. A bunch of politics with a sprinkling of religion. What could go

wrong? Some of the stories you've seen, or missed, all laced with my, often, acerbic commentary. It's what I get to do.  Let's go!

Instead of governing "45" would rather be the bully in the room casting insults on his favorite platform...Twitter. Late yesterday he called out Fox News for attempting to be "politically correct". Why?

The network invited former FBI Director James Comey and Rep. Adam Schiff (D-CA) for interviews. That, apparently, was way over the top. How dare the network to "appear fair and balanced"!  After all, they have been carrying the water for "45" for years. "Hard to believe that Fox News will be interviewing sleazebag & totally discredited former FBI Director James Comey, & also corrupt politician Adam 'Shifty' Schiff. Fox is trying sooo hard to be politically correct, and yet they were totally shut out from the failed Dem debates!"

Dear Fox News:  You better change your tune and dump those interviews. After all, it's really about ratings and money and as long as you can keep folks in the dark and still rake in the cash...well, makes sense...right? Listen to your biggest cheerleader and...golden goose.

Time Person of the Year 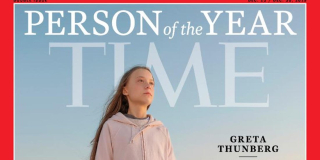 Speaking of our president. On Thursday "45" sent a Tweet to his 60 million followers blasting a 16-year-old girl with Asperger's syndrome who has rallied efforts at fighting climate change around the globe. "Greta must work on her Anger Management problem, then go to a good old fashioned movie with a friend! Chill Greta, Chill!"

It's not the first time "45" has bullied Greta Thunberg. But, this time he was really upset because he was not named the "Time Person of the Year". Losing out to a young woman was just too much for him.  Poor guy. Meanwhile the person who has made bullying a central figure of her national effort...Melania Trump was...silent.

Of course she was. 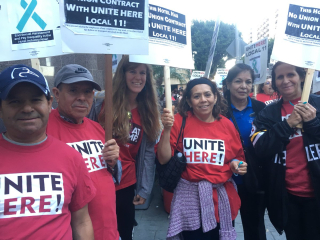 The presidential debate scheduled for December 19 might be a "no-show". The event which was to have been held in California was moved to Las Vegas, Nevada because of a labor dispute. Now, a separate labor dispute in Vegas threatens the derail the event all together.  The dispute is between the company Sodexo and Unite Here Local 11 over wages and benefits. Each democratic candidate has said they will not cross the picket line to attend. Sodexo, by the way, is a French based multi-national food service company with over 420,000 employees. And, something you may not know. It is the food service company of choice for Drake University here in Des Moines. The company has faced multiple fines for labor and safe working violations. Those fines now amount fo $102,939,076. And if you were wondering:  Here is a link to the national union, Unite Here.

For years my friend Danny Homan has railed against the State of Iowa and the lack of workers at state owned facilities. Last week the United States Department of Justice (yeah...those guys) were in Iowa investigating the care and treatment of residents of the Glenwood Resource Center. Danny is the leader of AFSCME Council 61 and he is livid about what is happening there. From his recent Facebook Post: "When the current governor fired the former Director of the Department of Human Services she promised the Citizens of Iowa a new Department of Human Services. I wonder if this is what she had in mind. This governor is destroying the services that the citizens of the State of Iowa. These charges that DOJ are making involve the management of Glenwood, the Director o the Department of Human Services and the governor of Iowa. If his is the new direction all the citizens who rely on this Department are in danger."

The war on working families and the unions that represent them continues and it has tragic consequences.

It's Not Only During Christmas 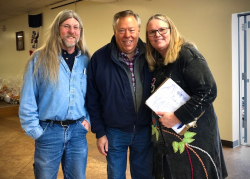 Last week nearly 100 union members gathered at the UAW Hall in Des Moines to package over 300 food baskets that were then delivered to folks in need and to former union members whose fixed retirement income isn't keeping pace with inflation. I visited with Mark Cooper the President of the South Central Iowa Federation of Labor AFL/CIO in this short clip from Insight on Business the News Hour: (Click to hear.)

And, to be sure, unions don't just work on behalf of their members...they work to improve the lives of every individual by standing up for safe working conditions, fair and equal pay and benefits that each of us enjoy.  (Photo Mark Cooper and Holly Sager at the event.) 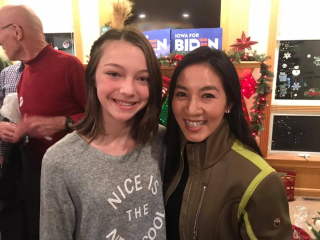 It was really cold but the house was warm with dozens of people who came to hear two-time Olympic Gold Medalist Michelle Kwan stump for Joe Biden. My friend Prakash Kopparapu hosted the event and I took my granddaughter, Jovie to listen and meet the famous skater. They had a really great talk about sports, training and what it takes to develop the skills to win...every day. Jovie plays softball (catcher), volleyball and basketball. "I could tell, right away, you are an athlete. Keep it up!", said Michelle.

It was a nice event and "The Jov" is now excited to go to the next event a watch party on Thursday. Thanks Emily for the invite. It's how we roll.

Finally I made a couple of "house calls" last week. The first was with my friends Jeannie McCrea 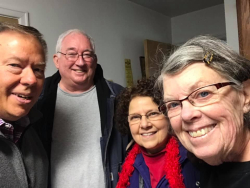 and Jerry Uhlman. We stopped by the home of our mutual friend Kerry Bowen to drop off a food basket from the union effort. Kerry has been battling some issues over the past year and many of us check in with her from time to time. For those of you who don't know Kerry was THE voice of Democrats in Windsor Heights, Iowa for years. Her home was always buzzing with door knockers, callers, petition drives. She has always been such a strong voice and we miss her.  We asked, first, if we could share this photo and she said it was just fine with her.  We had a good time looking at photos of mutual friends and she was able to identify each one.  For those of you who care...thought it was important for you to know.

Much more to share but...I gotta go!  Today is my "Carpet Cleaning Day". Family coming in for the holidays and my task is to do the floors...and there are a bunch of floors to do.

Thanks for reading and have a fantastic Sunday!