Religion and Politics...don't you love it?  Welcome to Sunday Morning Coffee my weekly look at the news stories you've, perhaps, seen

or missed along with my commentary. It's what I get to do before the sun comes up each Sunday. And, trying to do this balancing two dogs on my lap.  Much to cover so let's get started.

For over thirty-five years I've been deeply involved in my faith. I've lectured countless times, taught comparative religion classes, traveled as a chaplain, a spiritual leader at two congregations and held many, many one-on-one conversations with individuals who may have a faith tradition or...not. One of the tenants I firmly believe is that the reason we are told not to talk about politics or religion is because so many people know nothing about either of those subjects. That's not to say they don't have an opinion. You see, I think most folks make up their minds about politics and religion based on emotion rather than an intellectual dive. 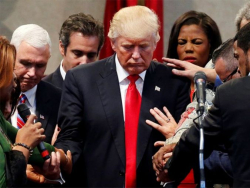 So, when one questions issues of faith or politics people act out of an emotional response. That is why, I believe, we are told to never bring up those subjects. Here is a perfect example. (Photo: Washington Post)

Last week I wrote on my personal Facebook Page this:

And, oh my, there were many. People attacking each other based on what they thought they were reading and many simply changed the subject from immigration to asylum to legal immigration and we were...off. The hateful, blistering comments are all there to see. I don't block and I don't delete. 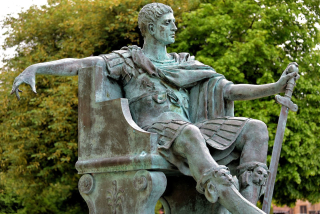 Want more? This happens every year. Just before Christmas I was in a discussion with a couple of people who were wondering why (some) Christians celebrate the birthday of Jesus on December 25th. Other's, as you may know, celebrate the birth on January 7th. My standard answer is that this date was set for both political and religious reasons by Emperor Constantine to placate and promote his new found faith (Christianity) among the pagans who celebrated the festivals honoring Saturn (the Roman god of agriculture) and Mithra (the Persian god of light). That way, it became easier to convince Rome’s pagan subjects to accept Christianity as the empire’s official religion. Then sprinkle a little astronomy (Winter Solstice) into the mix and we get trees that light up.

None of this should matter to those who believe because, well, you are acting on faith. And that's just fine. Enjoy and be kind.

However, and you knew this was coming, when discussing the many festivals based around the birth of Jesus such as Epiphany and The  Annunciation I was reminded that those were "Catholic holidays not Christian holidays". We have much to learn. 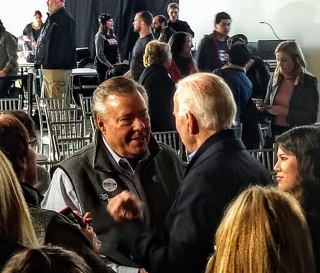 These are the two personal and political methods used by "45" for decades. Each and every time this guy gets into trouble he never takes the blame or the hit. He simply points to somebody else. It is part of his DNA. So, it shouldn't come as a surprise that he now blames former Vice President Joe Biden for...well...just about everything...but that it is Biden who is covering up some rigged deal with a gas company in Ukraine. It doesn't matter that this has been researched and all proven false. What matters is "deflect & deny". And the followers "45" and his news people over at Fox News are more than happy to add fuel to the story.

And so, on Friday, when asked by the Des Moines Register if he would comply with a United States Senate Subpoena to be a witness in the impeachment trial there he said, "No.". Of course the media went into a feeding frenzy. By Saturday the Vice President made clear that he would do the lawful thing but added this was just another case of deflect and deny because the issue at the core of the impeachment is the conduct of "45" and not Joe Biden.  Which, once again, has been proven time and again to be a conspiracy theory held up by none other than Rudy Gluhani and that crowd. Weary...and the Iowa Caucus can not come soon enough.

It's hunting season in New York and in other places around the world. Last night on the 7th night of Chanukah five Jews were stabbed at a 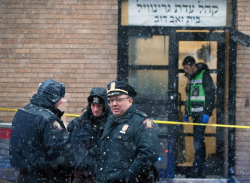 celebration in a home located in Monsey. This morning CNN is reporting that police have arrested a suspect by the name of Thomas Grafton who authorities say was "covered in blood". (Photo: The New Yorker)

This is not an isolated incident. It is the fifth attack on Jews in New York since the start of Chanukah.

And, that is not even half of the issue. Jews all over the world are being targeted, assaulted and murdered...because they are Jews. The rise of Jewish Hatred is reaching levels we've not seen for decades. It is part of the issue of tribalism we've seen rising over recent years and it is fueled by not only religious intolerance but also political intolerance. Think...Charlottesville and you catch my drift.

On Friday i had a news story about how banks are firing people at a rapid clip even as they are awash in profits. The latest announcement came from Morgan Stanley who said they are cutting 1,500 jobs. Now, 1,500 jobs doesn't sound like much...it's only 2% of their employee base.  Not much unless you are one of those 1,500 people.

Here's the kicker. Morgan Stanley reported a profit of over two-billion dollars last quarter and said it was their best quarter for revenue since 2007. But, there is more. Thanks to "45" and his tax shift policy Morgan Stanley will receive a $1.3 billion tax benefit during the fourth quarter, just by converting its wealth-management business, Morgan Stanley Smith Barney, to a corporation from a partnership.

Ain't it all wonderful.

The Lies They Tell

If you are a radio listener you've, perhaps, heard the radio ad attacking Congresswoman Cindy Axne (D-IA). The attack ad is paid for by America's PAC based in Marion, Iowa. In it you are told that while Cindy promised to work on and fix health care all she wants to do is talk about impeaching the president. And that is all the House cares about. It is a bold-faced lie. Congresswoman Axne has been in D.C. working on behalf of all Iowans and right now, today, there are over 400 Bills passed by the United States House of Representatives that are sitting, gathering dust, on Sen. Mitch McConnell's desk. Several of them deal with health care, prescription drug costs and election security. Sometimes ya gotta call it like it is. Lies...simple.

I hear, according to my friend Patrick Palmer, who tracks these things, that Marianne Williamson was at a house party in Windsor 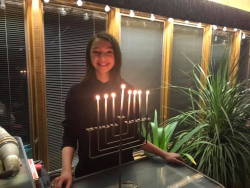 Heights last night. Wasn't here but I do wonder if she paused to light the menorah. It was the 7th night after all. Here Jovie is getting it done for us and she's finally got the blessings down.  Yay!

This afternoon I'll be attending a funeral.My long-time friend Dr. Mark Finkelstein died on the 25th. It is a tragic loss for his family and the entire Jewish Community of Iowa. Mark served, since 1996, as the Director of the Jewish Community Relations Commission of Iowa and was based here in Des Moines. Mark was a quiet, intellectual man who always looked at the world in fairness and equality. He once told me, many years ago, the reason there was a community relations commission was so that people would know who we are and maybe...just maybe, they wouldn't hate us so much. Clearly there is still work to be done. However without this kind and thoughtful man. The lights of Chanukah have been dimmed and we are all diminished.  Baruch Dayan Emet and may his memory be a blessing.

Finally, if you are so motivated, I'd like to ask that you donate to my Iowa State Senate Campaign. I've got just a few days to reach a goal of a bit more than $1,200 for this reporting period. If you think it's past time for a progressive who has, for decades, fought for working families and equal rights to help shape laws that will have a positive impact on all Iowans...make a contribution here. It matters as I'll be facing the current president of the Iowa Senate and he has been no friend of working families...or for that matter dogs and cats. It's a story...  Every donation helps.  And, thank you in advance.

Have a wonderful Sunday and Happy Chanukah and Happy New Year.