I know...if you are dialing up Sunday Morning Coffee and it's now lunch time...I take full responsibility. The past 24 hours are a blur

from services in Mason City to bell ringing for the Salvation Army to a hockey game to getting our radio program out the door because of an early broadcast at 11:30...yikes.  Excuses...right? Let's go!

We have become so tribal and none of that is good for our nation. While members of the Republican Party continue to deny what "45" has done and seek to obfuscate the reality of a corrupt and dishonest president. His base continues to believe that what he has done to obstruct a co-equal branch of our federal government is just fine. We have seen this before friends and it is not that different to what we saw take place in Germany in the 1930's. For those of you who think things like that can not happen again...beware. It is on our doorstep. 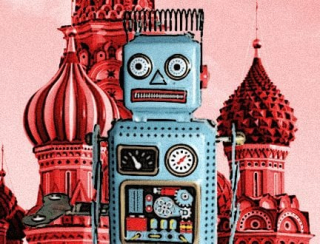 As the Iowa caucuses heat up there has been a growing number of hateful remarks about various Democratic candidates. Usually those remarks have to do with ageism, sexism and homophobia. If I didn't know some of the people who are writing these insults, on Facebook or other platforms, I would think they were Russian Bots.

The fact of the matter is that it is highly unlikely that your prefered candidate will become the nominee of the party. Then what do you do? Take your campaign lit with you to the basement and fail to work for the eventual nominee following the convention?

Take a breath. You are not doing your candidate any favors. In fact, some of the comments made would embarrass your prefered candidate and my bet is they would disavow them and censure you in a heartbeat. We are better than that.  And, sure it's easy to click off a 20 word insult...but think before you send.  Are you really shedding a positive light on your candidate?  No...and it is more than disappointing.

It was an expensive race. The two main candidates spent hundreds of thousands of dollars on the contest. In the end the incumbent, Mayor Frank Cownie squeaked out a narrow win over former state senator and developer Jack Hatch. It was not only expensive but also toxic. While nobody asked my advice...had they...I believe the outcome may have been different. Both are friends of mine and I truly hope fences will be mended. But, fear that may take some time.

We Have a Race 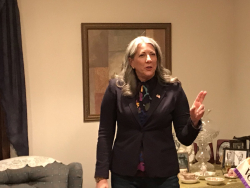 Last Sunday I attended a house party for Kimberly Graham one of four running to become the next United States Senator from Iowa. I have watched this contest and over the past several months and noted how Graham has grown as a candidate. While not the favored one by many in the establishment circle she has become a solid campaigner and speaker. I was impressed.

I also know the other candidates and I'm personal friends with two of the three. I've yet to meet Admiral Franken but look forward to that opportunity. One thing is certain Senator Joni Ernst (R-IA) is in trouble and that's more than me saying so...the polls also indicate she will fall in November.

Democrats all over the state are organizing what are being called "neighborhood groups". Geographical parts of the cities to rural towns are not only working with their county organization but are working at a more grass-roots level to encourage Democrats to mobilize. It's really refreshing and it's brought so many more people together.  Stunning. 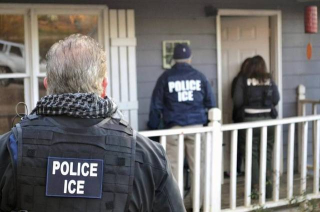 Last week, while campaigning, I heard a troubling story I'll share here. We have known for some time that the Immigration and Customs Enforcement (ICE) officers have been targeting hispanic folks and that has led to many staying out of sight. Even those in the country legally are avoiding community gatherings and events because they fear being caught up in the hysteria that has infected our nation.

Imagine that you are an immigrant who is in the process of securing a Green Card. It's something that takes time and money. You have a job and you are doing everything right. But, one day, in a convenience store, you are confronted by ICE. Before you know it you are on a bus to Omaha and a detention center. There you are informed it will cost you $7,000 to be reunited with your family. No, you've not done anything wrong. You have been in the process but now you are told pay up of get shipped out. You call your family and they pony up the 7K and you are released.

Think it doesn't happen?  My sources tell me this is fairly common and that many immigrant families hord a stash of cash just in case.

Really?  Yes...really. What have we become? 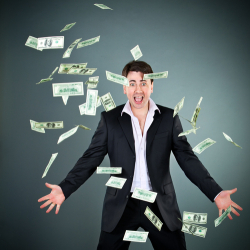 It was a blockbuster. The U.S. added 266,000 jobs in November. That is nearly 100,000 more than what was projected. But, what kind of jobs are they? Yeah, you guessed it. Many are low pay jobs in health care, food service and hospitality. 45,000 jobs were GM workers going back on the job following their successful strike. 12,000 were government workers and a mere 1,000 in construction.

At the same time new data indicates that fully one-half of Americans are earning the median income of $18,000 a year.

One more stat for you. There is not one state in the United States where a person can work 40 hours a week and live "comfortably". Every state, based on numbers from the Labor Department for wages and then adding 20% for a "comfort factor", requires more hours of work. In Hawaii it is 91 hours a week. In Iowa a worker must log 48 hours a week to make $44,000 a year.

It has been a busy weekend. Friday saw me driving to Mason City for my work at Adas Israel the Jewish Congregation of Northern Iowa. I go there once a month to do their services and to lead a two hour Torah (Bible) study session with folks from many religious 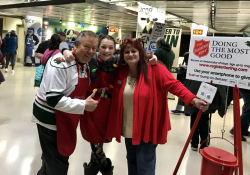 Rolled back into town in time for Jovie and me to head to the Iowa Wild hockey game to raise money for the Salvation Army. What? Wait! A Jewish guy raising cash for a Christian group that many of my friends in the party don't much care for?  Yeah...it's what we do for each other.  We had a blast and a big thank you to my friend Tamyra Harrison for calling me and asking for some help.

From the campaign... I was able to speak at the Southeast Dallas County Democrats forum this past Tuesday. That was great fun and I'm grateful for that opportunity. This Tuesday I'll be speaking to the Clive Democrats for their December meeting.

Between working, knocking doors, and "call time" it sorta keeps a person busy.  But, I've been encouraged by the number of people who

sense that I have a solid message for working families and a solid background in working on behalf of others. Thank you. Here is the campaign website.

Coming up on 21 December at the West Des Moines Library at 10:00AM I'll kick off the first of many "Listening Posts" that have to do with various issues confronting Iowans. This session will be about "Finding Common Ground with Common Sense on Gun Laws".

Hey, sorry, once again this is so late...think of it as Sunday Morning (Brunch) Coffee.