Sunday Morning Coffee comes to you from Iowa. You know, the crossroads for politics. The new Iowa Poll commissioned by the Des Moines
Register has four Democrats bunched at the top being led by Bernie Sanders, then Elizabeth Warren, Pete Buttigieg and Joe Biden round

out the top four. Let's get going.

According to the new Iowa Poll in the Des Moines Register 45% of Iowans disapprove of the impeachment of the president while 43% approve and 12% are "Not sure". The folks who are against the impeachment process continue to parrot the talking points of the president that it is a "witch hunt" and a "waste of time
and money". It looks like you can lie and cheat and 45% of Iowans don't much care. One of the stunning things is that while the House has passed over 400 bills dealing with everything from lowering drug prices to voter security there are still folks out there that contend the only thing on the minds of Democrats is impeachment. Not true but...who cares...right?

Sir Issac Newton, in his third law of of physics, said that for every action there is an equal and opposite reaction. That came to mind this past week as the United States killed off a terrorist, Iran (in response) launched missiles into Iraq targeting U.S forces. While Iran says 80 members of the U.S. military were killed the Pentagon says there were no casualties. But there were 176 innocent people who lost their lives when Iran shot down a Ukrainian commercial airline that had taken off from an airport in Tehran. You would think that would be enough. That both sides would stop, stand down and think about it all.

But, no. As the week ended the White House announced further economic sanctions against Iran. We need some adults in the room...and quickly.

When the news broke that the government of Iran shot down the airliner protesters took to the streets of Tehran calling for  "death to liars" and "death to the dictator," reportedly referencing Iran's supreme leader, Ayatollah Ali Khamenei. How this will play out with a government that is not shy from killing protesters to quell demonstrations is anybody's guess. (Photo: Al Jazeera)

Six candidates will appear on stage for the national debate on Tuesday evening. Qualifying are Biden, Buttigieg, Klobuchar, Sanders, Steyer and Warren. Candidates had until the end of day on Friday to make the more demanding qualifications of the Democratic National Committee. It looked like Tom Steyer would not make the cut but did as he registered high enough in two Fox News Polls, one in Nevada and the other in South Carolina. To date Steyer has spent millions of his own money wooing voters across the country and indicators are that it is having an impact. 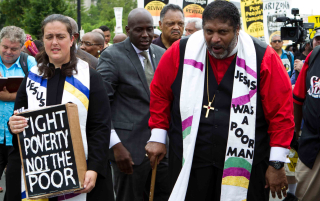 protestors demand the candidates face the issue of rising poverty in America and in Iowa. The group, last week, released a statement indicating that, in Iowa alone, 1.1 million people are living in poverty. That my friends is nearly a third of the states population.

Then on Wednesday the 15th there will be a rally at First Christian Church featuring Rev. Dr. William J. Barber II and Rev. Dr. Elizabeth Theoharis the co-chairs of the organization. The event will take place starting at 7:00PM. Here is a link to that event.

I'll be at the Tuesday March but absent for Wednesday as I'm out of town on assignment. HOWEVER, if you want to hear more about what this is all about I did sit down for an extended conversation with the Iowa leadership and here is a link to that interview. (Photo: The Nation)

I attended a legislative breakfast last week put on by the Clive (Iowa) Chamber of Commerce. It was a stark reminder of how much has changed and how much has stayed the same. Sitting at the head table were four legislators. Three Democrats: Sen. Claire Celsi (D-WDM), Rep. Jennifer Konfrst (D-Windsor Heights) and Rep. Kenan Judge (D-Waukee) were there with the lone Republican Sen. Charles Schneider (R-WDM).

It wasn't that long ago that all of those seats belonged to the GOP but lately the party has been getting beat, especially in the suburbs, as demographics are changing.

The take-a-way on some key issues and the response:

There were lots of other issues but while everybody seemed to play nice and say that we need to do more there is one glaring problem. We ain't got no money.  Well, we do and Chuck crowed about how fantastic the budget is and that we've got a $400 million surplus, but if the goal of the GOP this session is going to be another round of tax cuts...how we gonna pay for...anything?

I dunno...you? The session kicks off this week. Should be fun to watch.

It's been a busy weekend, already. On Friday I traveled to Mason City for services there and on Saturday held our Torah Study with a big crowd at the synagogue. Not to get all religious on you but in this Torah Portion (Gen. 37:28 - 50:26) we learned that as Jacob was blessing his children and making decisions about future leadership he said that the tribe of Reuben (the first born) should not be in a leadership role because, "a leader must think through his decisions and reckon their consequences". Something that lacked in the eldest son. Go ahead...read it and then think about our own "leadership".

A couple of years ago I was at a business "garden party" where about 60 folks came together to celebrate relationships and the start of fall. The Iowa legislature, under the leadership of the Iowa Republican Party, had just decided to make a stab at voter suppression. The GOP doesn't much care for lots of people voting. It cramps their style. On hand for the party was my opponent in the November 2020 election. I stood toe to toe with Chuck Schneider and told him to his face that I would fight him at every opportunity should the legislature enact suppression of the vote.

Well they did and I am. That is only one of many reasons I'm out to Chuck Chuck in 2020. If you would like to help in that effort, here is a link to my campaign website and its donation page.  Thank you, in advance!

Thanks for reading and have a fantastic Sunday.