Shaved, showered and in the office before 6:00AM. Yikes!  Welcome to Sunday Morning Coffee my weekly look at the political (and

sometimes religious) news you may have seen or missed all laced with my commentary. Why? Because it's what I get to do and have been for well over a decade. BTW: Thanks to all of you who have been faithful readers forever. OK, let's go!

It escapes me how rudderless our nation is. Every day the president gets up to present an "update" on Covid-19 and every day his staff or the real leaders in the room have to walk-back or "clarify" what he just 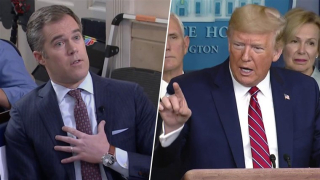 said. Last week was a real trip when NBC White House correspondent, Peter Alexander asked the president what he would say to Americans who are "scared". What happened next was astonishing as "45" lit into Alexander. Instead of answering, the president responded by rejecting the question ("nasty"), attacking Alexander ("terrible"), and assailing NBC News' parent company Comcast ("Con-Cast").

I have friends who accuse me of never paying attention to their favorite network. "I bet you've never even seen Fox News!" and "Me? I

Two stunning developments over the past three weeks: 1) The talking heads on Fox have gone from denying the seriousness of Covid-19 to declaring it real and a danger. You, no doubt, have seen the tape.

No wonder my Fox loving friends have, for weeks, disputed the danger.

And, this one is also pretty good. This morning Fox News had this breathless headline, "Cuomo's Coronavirus TV Briefings May Have Biden, Sanders Worried" with this lead: "Have Democrats found an alternative to Joe Biden and Bernie Sanders for the party's 2020 presidential nomination?"

Uhm, the answer is..."No" but it does sow some hope in the minds of those who are scared to death that their great leader will go down in November to (gasp) a Democrat.

Meanwhile why is Gov. Kim Reynolds (R-IA) always two weeks behind in her handling of the Iowa outbreak? At first I figured she was taking her ques from Fox News but lately it's becoming clear that she may be hoping this will all go away. Here is what she should be doing: 1) Call on the National Guard to implement more bed capacity it's what they do, 2) Take a lesson from Washington State and start, now, taking over additional bed space in hotels, casinos, etc. 3) Put the state on a lock-down as has been done in other states.

I get it she does not want to panic the public but...guess what...they already are.

Meanwhile this pandemic is accelerating a divide in our state and nation. Those that can "work from home" are doing so but there are thousands of individuals who can not. In addition we have a vast homeless population where "staying isolated" is not an option. Homeless shelters and workers there are in grave danger. Maybe I missed it...but what's the plan there?

I've gotta ask: So if a number of Iowa distilleries can produce gallons of the stuff and hand it out for free where is the commercial grade stuff? I get it that panicked citizens have hoarded it in their garage (along with boxes of toilet paper) but...seriously? Folks that usually make booze seem to be able to get this done and long lines of people show up to get a bottle in places like West Des Moines and Cedar Rapids. Good PR for them but still...

BTW just what the hell are you folks going to do with all that toilet paper? Really. The other day I watched two women fighting over the last package of 24 rolls...

Folks are also hoarding ammunition. Last week we had a story about how retail centers are running out of ammo as worried citizens rush 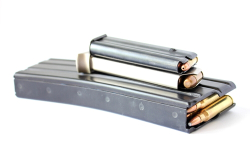 out to buy what they can. Because I'm sort of curious about that I called a couple of folks I know who might have been among those stocking up. When I asked "Why?" this was my answer: "I've got to be prepared. You know once they shut down the grocery stores I've gotta protect my stuff from looters."  Nah, governor...nobody out here is panicked at all.

Usually my friends in the GOP march lock-step together however I recently learned that in Iowa State Senate District 22 there will be a primary. District 22 is made up of Clive, Waukee, West Des Moines and Windsor Heights...and yep, I'm a Democrat running there. Anyway, on the final day candidates could announce a woman by the name of Porsha Hart filed. Porsha lives in Waukee and is challenging the current mayor of Clive. 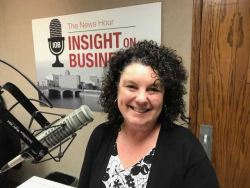 Yesterday I interviewed Jessica Dunker the President/CEO of the Iowa Restaurant Association about that industry and the hit it is taking because of Covid-19. I'll air that segment tomorrow but here are some stunning take-a-ways:

And that is in the first week. She told me that if you are unemployed due to closures that the Iowa has waived penalties and you should, immediately, file for unemployment. In addition she is working on finding a way for restaurant owners who have business disruption insurance being able to make a claim. It seems that pandemics are not covered. What this will take would be a waiver and then the federal government to step in and assist. Stay tuned.

I am on the phone a ton. I make at least fifty to sixty calls each day, sometimes more. I've noticed something interesting. Phone calls that might have taken three or four minutes to complete are now stretching seven to ten minutes in length. This isn't scientific but it is, I think, a reaction to people wishing to stay connected.

I've taken part in a number of Zoom conferences last week. One was with leadership from the Iowa Democratic Party on strategic ways in which to engage voters ahead of the primary election in June and the general election in November. Lots of ideas and there needs to be as we are restricted in voter contact including speaking opportunities and door-to-door canvassing. It's a whole new world. But, we must 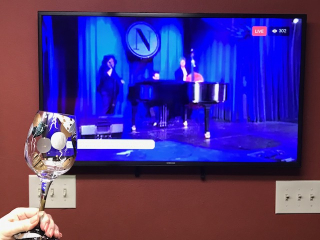 continue to work, daily, on voter interaction. I know I've ramped up not only calls but also other ways to introduce myself to voters and share the message that we must...must find ways to work for working families in Iowa. If you are interested here is my website.

Finally, on Friday night my friend Max Wellman held a "virtual jazz session" from Noce a great club in Des Moines. He and bassist Steve Charlston and singer Tina Haase Findlay performed for three hours on a live stream from the club. And, yes, people watched. During the event there were over 300 people tuned in to watch and listen. That, by the way, is more people than what the club holds. It was very cool. There are a number of these virtual sessions going on and it was great that some "locals" could also join in. Thank you.

Thanks for reading and stay well.

Michael-Re the hoarding...Publix markets have posted signs that inform everyone (but are aimed I suspect at the hoarders) that they are not returning ANYTHING purchased during the pandemic...So all of you "well prepared " folks who have 683 rolls of toilet paper in their underground bunker, or shed or what have you....you now OWN toilet paper through the year 2035....Congratulations!
Nancy