Grab a cup of Sunday Morning Coffee a mix of politics and, sometimes, a dash of religion. What could go wrong...right? Here are the news

stories you have seen or, perhaps, missed all laced with my commentary. Why? I dunno it's just what I've been doing early each Sunday Morning for...years.  Let's Go!

I'm in. We should, at all costs, liberate America from the wackjobs. I knew this was coming weeks ago as some of my friends on the far right started in about how their "freedoms are being trampled by the police state". Oh yeah...it's real and totally predictable. Here is the next shoe to drop. It's not going to take long for several "good ol' boy" bars to start opening and that will create a powder keg of trouble. If you're not tuned into what these people talk about...it's scary. Right now, today there are Tweets being put out that call for armed resistance. For example take a gander at this screen shot.

The author, Matt Couch, says in his profile: "Christian, Father of 2, Investigator, FounderThe DC Patriot & America First Media"  And, there are many, many more just like him.

Which brings up this: Over the years I've noticed that the vast majority of individuals who self identify in their social media profiles as "Christian" seem to be anything but. Maybe I'm missing something in the doctrine but being mean, spiteful and bigoted are not words that one might equate to "Christian".  But, what do I know.... 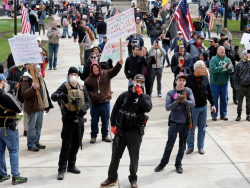 Meanwhile the best caption I saw for this image was, "A group of men protest being told what to do with their bodies".

You may have seen this photo being shared on social media. The photo is real but the caption is misleading. Many have reported this image to be from the GOP endorsed demonstration in Michigan last week. It's not. The image is actually from Bosie, Idaho and was taken as supporters of the president staged a counter demonstration against Sen. Bernie Sanders (I-VT) who was there for a rally. Just trying to stay real. If you want to read the story here is a link to Snopes.

But, it would seem birds of a feather...yes?

We've all heard about how the captain was dismissed and the dust-up that followed but something that you may have missed. While there are well over 600 crew members who have tested positive for COVID-19 the majority of them are asymptomatic. Underscoring the issue that people with the virus, who feel just fine, can spread it. Which is why, my "Liberate" friends, we are being told to hunker down.

Meanwhile there are reports that Capt. Brett Crozier may be returning to duty aboard the USS Theodore Roosevelt. That according to the New York Times.

There are difficulties in "drawing lines in the sand". The main problem is that sand can be rather "fluid". Ya draw a line in the sand and the wind blows or the water reaches it and "poof" it's gone.

Governor Kim Reynolds (R-IA) is learning this lesson one line at a time.  Each time she draws a line in the sand when it comes to the COVID-19 outbreak in Iowa the line gets moved or erased. That's not leadership...it's just drawing lines. OK, I know, many of you think she is doing a wonderful job at her line drawing but, rather than misleading the public maybe she should just tell the truth. Flirting with re-opening our society and failing to call for more stringent regulations is pure politics. Maybe she's angling for a White House run?  After all the GOP did give us Sarah Palin.

Sorry, but you're only getting half-a-cup of Sunday Morning Coffee this week. I've got a list as long as my bride's arm of stuff to do today. While she may still be sleeping I'm making lists.  But first a couple of observations.

Recently I went out to a couple of grocery stores. I was struck by how different Aldi is treating customers how HyVee is treating the pandemic. At Aldi they have two people, outside, cleaning grocery carts and then counting the people going into the store. Once inside there is a person greeting shoppers and reminding them to stay travel in only one direction, stay at least eight feet away from the other shoppers and if you miss a product you wanted to purchase don't "backtrack" but ask an employee to go and get the item you want.

Meanwhile HyVee is also cleaning carts but and directing traffic but its much more haphazard. People are not really paying attention to the "One Way" signs on the floor...or so it seemed.  I get it that the typical HyVee store is so much larger than Aldi and this isn't a dig...just an observation.

It's coming up on "Yard Sign" time. Getting some Libbie for Iowa signs out and thank you to the folks who have volunteered their space. I really appreciate it.  And, if you want more about the campaign for the Iowa State Senate head over to my website LibbieForIowa.com and have a look. And, if you can...I would welcome any donation to the cause.