commentary. This week is different. Our nation is going through a cathartic experience centered on racism. A racism that permeates the American Experience. To that end here is a short piece about listening and learning...something we must do if we are to survive.

I’ve always subscribed to the idea that if folks of different cultural backgrounds communicate with each other we’ll do much to reverse generations of prejudice and hate.

Thirty years ago I was asked to become part of the Jewish Community Relations Commission of Iowa. The goal of the organization was to learn of and speak to Jewish concerns not only in the Jewish Community but also, and more importantly, in the non-Jewish Community. I’ll never forget the day I asked why such a group existed and I was told, “We do this so others know us and won’t hate us as much.” Pretty stark...right?

Over the past six or seven years, given my close association with leading members of the Des Moines Area Black Community, I have come to realize how painful and systematic racism is in our culture.  While there are many similarities between the Black and Jewish experience there is a stunning difference:

Jews made the decision to immigrate to America while Africans were brought here in chains.

Once here Jews worked among themselves to increase their economic stability. They became merchants, peddlers, grocery store owners, junk dealers...never, really, escaping prejudice and hate but they could, if you will, “pass”. My own family worked overtime in an effort to "pass" and become accepted into the majority culture.

The Black Community could not simply “pass” yet they too, in the face of incredible obstacles, created economic zones where they could, in large measure, self-sustain.  Remnants of that still exist but many were destroyed when something called “urban renewal” was created.

Here in Des Moines, Iowa a neighborhood that housed black owned businesses was, in 1961, plowed under to make way for the MacVicar Freeway (I-235) and other "improvements" to the city. The economic opportunity for many vanished as bulldozers laid waste to the vitality of the area. Now, 59 years later, the economics of the Black Community is still in tatters. The reality has been well documented.

Still with me?  Good.

Let me go back to my original sentence about communication among cultural and racial groups as it pertains to where we are today.

If White America fails to learn than we are condemned to suffer continued strife between our great cultures and races. 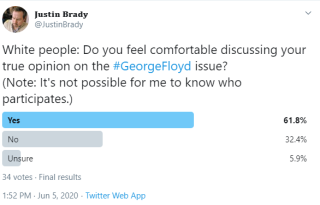 Last week a Caucasian media friend of mine put out a Tweet that said, “White people: Do you feel comfortable discussing your true opinion on the #GeorgeFloyd issue? (Note: It's not possible for me to know who participates.)  You can see the image of the final result of 34 respondents.

Justin, in a later Tweet, said he found it “interesting” that one in three people found it uncomfortable speaking to the issue.

I can understand. In reality “white people” simply do not have the experience to feel comfortable. I suspect many Caucasian folks are uncomfortable because they can’t articulate their thoughts. It’s just a guess but I have had multiple conversations with folks who are white who shake their heads or say on the phone, “I just don’t know what to think. It is awful but so too is the looting.”

Notice how fast they go from the murder of a man in daylight, in front of witnesses to the criminal activity of looting. That jump minimizes 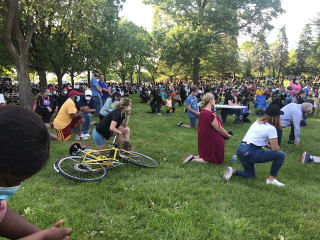 what happened and what is happening.

The only way Caucasian people will come to truly understand the pain and frustration of the Black Community is to listen to the stories. Process them and speak out against racism, brutality and a system that has continued to enslave.

Having seen civil unrest from the 1967 riots in Detroit to what is happening now I can share with you there is a difference today. That difference is the number of “white people” who are sharing space, marching and vocalizing their shared frustration about a legacy of evil that drives to the core of our nation.

I'm listening Michael! Thanks for sharing. This was a good one! An important one!