And, Happy Father's Day to those of you who are fortunate to be a father and welcome to Sunday Morning Coffee where I get to mix

politics with a dash of religion and a heaping helping of my commentary. It's what I get to do early each Sunday because I so enjoy getting under the skin of Republicans everywhere. And there's plenty here to ruin their coffee. Let's go!

Of course it was a dismal failure. "45" carried Oklahoma by over 30 points in 2016 and so, no doubt, figured it would be the sort of place where he could bask in the adoring din of "his people". Never mind that Oklahoma is experiencing a rash of new COVID19 cases. Never mind that the rally was originally scheduled for Juneteenth. Never mind that his own CDC said not to hold the rally. Never mind that Tulsa, ninety-nine years 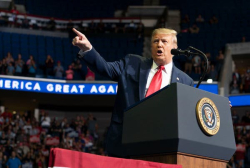 ago, was the site of the Black Massacre. It played host to the Red Summer. Nope, the president needed, indeed craved, the rabble that follows him like lemmings.

On Monday he crowed that a million people would descend on Tulsa and that a huge outdoor area had been set aside so that he could deliver not one but two senseless diatribes to his faithful. But none of that happened. The indoor arena was not full. The overflow crowd didn't show. The speech?  The same old tired rhetoric that is meant to stir his adoring fans to violence and hate. America has moved on... (Image: New York Times)

The headline in the opinion piece was, "Don't Believe the Polls". The writer went on to declare that "45" will be swept into office because, "...as we saw in 2016 the polls can be very wrong and a win by this populist president is going to take the nation by surprise".

Except, we've now seen what this narcissistic man is about. Except, we have witnessed how he has divided this nation along every line possible. Except, the economy that was to propel him to a solid victory is stumbling. Except, Joe Biden is everything this president is not. Except, this is not 2016.  But, do not doubt what is to come will be an awful campaign season. The man the Republicans hold up to be their savior is a terrible person. They know it and you know it. We will, we must, work hard to defeat him now and in November. 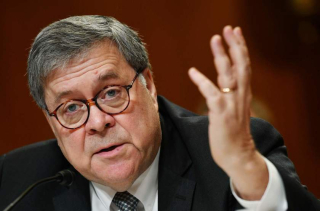 And the hits just keep coming. The news dump on Friday always means something strange is happening at the White House. Actually something "strange" is always coming out of that place. But, just in case you had any hope that the Justice Department of the United States of America is anything other than another political arm of "45" you got tanked this weekend. William Barr the lapdog for "45" started a real interesting turn of events as he announced that the Chief Prosecutor for the Southern District of New York resigned and Barr had installed a replacement. Only to be one-upped by Geoffrey Berman who said he had not resigned. Barr then turned his attention to "45" who then fired Berman. Then it was announced that the person to replace Berman, on a temporary basis, will be the deputy prosecutor Audrey Strauss. And, finally "45" announced that the new person in charge of this very important position would be Jay Clayton, the current chairman of the Securities and Exchange Commission and somebody much more friendly to the White House and the cronies that have come and gone. Grab your popcorn. (Image: Los Angeles Times)

OK...two quick questions and you can answer them in the comments or where ever you get this post. Ready?

I look forward to hearing from you. This should prove to be interesting.

Of course you have heard that dog whistle. The phrase is used to undercut the Black Lives Matter movement that has been growing in popularity especially among young white folks that know and understand the difference. You see the answer is that all lives can not matter until Black lives matter. And, in this nation, that has not been the case for over 400 years. Systemic racism is all around us, in ever corner of our society yet many choose to ignore that fact. However, as the movement grows more and more people are starting to see the sin that stains this nation be it against the Original Americans, African Americans, Latinos, Asians...the melting pot that is this country. And, nope we ain't going anywhere and your racist attitudes will be plowed under...this time.

The Poor People's Campaign - A National Call for Moral Revival 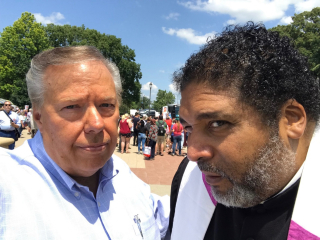 Yesterday morning thousands of people from across the country joined in the livestream event as we marched on Washington in a virtual manner. If you missed it you can see the event this evening at 5PM Central. Here is that link. I can promise you that it will move you and your family to action. With 140,000 million Americans living in poverty in this the most wealthy nation on the planet is a sin. Plain and simple. I once was the president and then the chaplain for an organization that had, as its creed these words:

"We believe that faith in G-d gives meaning and purpose to human life; That the brotherhood of man transcends the sovereignty of nations; That economic justice can best be won by free men through free enterprise; That government should be of laws rather than of men; That earth's great treasure lies in human personality; and That service to humanity is the best work of life." 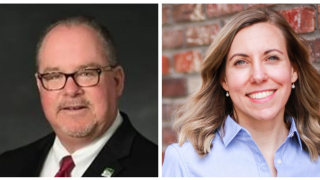 Friday evening, just before Shabbat, my doorbell rang. The person on my front porch was the current mayor of the City of Clive who happens to be the Republican nominee for Senate District 22 (Clive, Waukee, West Des Moines & Windsor Heights). I know Chris Cirksena. He is serving in his third term as mayor. And, he knows me. We have had a cordial relationship for years.

Cirksena was out knocking doors. He was taking a page from the 2016 GOP playbook and that means he will knock every door in the district. It doesn't matter if it is a door with Democrats, Republicans or Independents and he's been at it for some time. That does not bode well for the Democrat Rev. Sarah Trone-Garriott who recently won a three way primary and is a first time candidate.

To suggest that Chris didn't know the leanings of the people at my address wouldn't be accurate. Not with a BIDEN sign in the front yard and a list that he carried. Nope he knew and for that I have to credit him.

However...true to his GOP colors he wore no mask, did not present any social distancing and tried to push himself as a caring moderate that will work together to serve all the people of the district.

When I pointed out to him that he represents everything that is wrong with our state and told him he would have a hell of a time playing that "moderate card" in the GOP caucus he looked a bit surprised. From voter suppression to education to health care to workers rights to civil rights to economic justice to LGBTQ issues Chris Cirksena and his party are on the wrong side of science and history. Beware the "nice guy" who knocks on your door.

Last week I received the crushing news that the daughter of Joe and Susan Sestak died of brain cancer. Alex had beaten the disease several years ago but it came back just ahead of Joe running for president last year. He entered the race late after receiving information that the cancer was in remission. 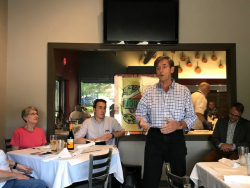 I first met Admiral Joe on Tuesday, 25 June at 6:30PM as he presented himself at a meeting of the Windsor Heights Democrats and gave a moving speech about our nation and our people. That evening I became a fan and a friend. Over the course of the next several months I showed up wherever Joe needed me. From walking in parades to radio interviews to snapping photos and sharing them and his message across a vast social media landscape. And, yes, I also sent a contribution. 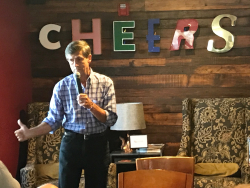 When he ended his long-shot attempt at the nomination we spoke about so many things that surfaced during our time together. It was not a sad phone call but it was impactful.

When I received word from my friend Evan O'Connell, the former communications specialist for Admiral Joe, that Alex had died it truly was crushing. I know how much Joe loved his daughter and he spoke about her and her bravery at every campaign stop. Today he still wears a bracelet that Alex made for him years ago.

Look, I'm sorry that this got wordy today. But seriously people we have much to do. So very much to do. Now is not the time for us to rest. There are people who need us to be and stay active. This is a fight and it isn't just about the White House or the State House it is about reviving the soul of this nation. It is up to you.  I'm here and not going anywhere because we're in this together.

May you have a meaningful Fathers Day and thanks for reading.