It's a term I saw this week that describes our nation...Terra incognita. The Latin words were used by early cartographers for regions that

had not been mapped or documented. It means "Unknown Land". Welcome to Sunday Morning Coffee my weekly look at the news stories you might have seen, or missed, all laced with my commentary. And, as always you are free to comment and share if you wish.  Let's go! 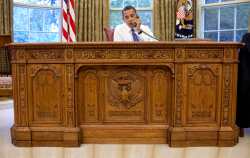 In 1880 a gift arrived at the White House. It was a piece of furniture given by Queen Victoria to President Rutherford B. Hayes. The massive desk was built from English oak timbers which came from the British Arctic exploration ship HMS Resolute. Hence the name. Many presidents have used that desk in various parts of the White House since Hayes. But none, I am sure, every used it as a prop to hawk commercial goods. So, yes, we are in uncharted waters in an unknown land when the President of the United States, in his true role as a huckster, poses with Goya Food Products as if it were his failed steaks, vodka or a diploma from his failed university.

This is what we have become as a pandemic rages across the only nation on the planet with the ability through science and determination to conquer COVID-19.  We have the Commander in Chief hawking products because it was a pay-back to that company's CEO for heaping praise on the president.

Meanwhile in Portland, Oregon unidentified federal para-military thugs are rounding up United States Citizens and placing them in unmarked vans hauling them off to who knows where. Did the state request the assistance? No. Did the city request the assistance? No. They are there on the order of the "Huckster in Chief" as a test case for what he will do in other, perhaps larger cities, to quell demonstrations against police brutality.  Those of us with a passion for history have seen this many times before.  All that is missing is shinny leather coats, a black fedora and the vocal demand of "Papers! Show me your papers!". Sure, it plays well with his fanatical base and that is the idea.  If everything else is failing dictators traditionally move forward with curbing your freedoms. 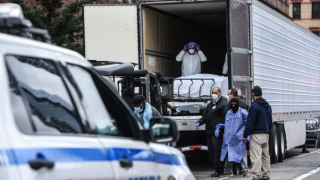 They are piling up in Florida, Georgia and Texas as COVID-19 rages. In Georgia Gov. Brian Kemp (R-GA) has gone to court to prohibit the Mayor of Atlanta, Keisha Lance Bottoms, from enforcing a city-wide mask order. Kemp, if you recall, won his race against Stacey Abrams in a highly questionable fashion as he refused to step down as the states election commissioner which means he had control over his own election.

But, I digress. It truly is "America First" as this nation leads all others in what can only be called the worst botched federal response to a national disaster...ever. Only one other country has failed as we have and that is...Iran.  Ironic...no?  Meanwhile the president and his "swamp dwellers" heap praise on him while attempting to undermine Dr. Anthony Fauci who happens to have an approval rating of over 67% of the population. "45" wants to ignore the issue and simply shoot the messenger.  Another age old  political tool used by despots.

I suspect that when we realize that this failed president has now been responsible for the killing of as many victims as Saddam Hussein or Muammar Gaddafi during their reign of terror we may have to hold a tribunal to convict him and his henchmen.  Awful... Meanwhile the enablers of "45" like Kim Reynolds (R-IA), the current Governor of Iowa, are demanding that schools reopen and children be in the classrooms. Schools are already like petri dishes for illness and now we're going to use children, teachers, bus drivers, cooks, custodians and administrators as guinea pigs. While it may be true that children under the age of 10 do not spread COVID-19 as older children do...the key word in that sentence is "may". We just do not know. It is yet another example of failure and cowardness. November of 2022 can not come soon enough.

However, you and I have a massive job to do THIS year in Iowa. We must capture both the House and the Senate and send these failed leaders the door. It is not going to be easy but it must be done to preserve Iowa for the future.

With those four words I would hope that Americans can now see how tone-deaf these people are. Last week, in the face of mounting unemployment Ivanka Trump, the "presidential advisor" who has never been unemployed or worried about paying a bill or stood in a line for food told the millions of people out of work to, "Just find something new..." You know, go be a brain surgeon or a crisis counselor or a world class chef. Go back to college become anything you want to be as you try to put food on your table.  Terra incognita!

Oh oh...the Iowa Secretary of State has been granted his request to mail out ballot requests to every Iowa registered voter prior to the 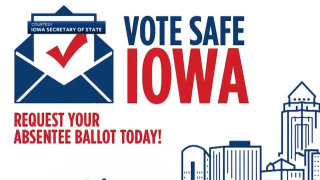 November election. If you remember the Iowa Legislature, run by Republicans, were pissed off that Paul Pate sent out absentee ballot requests to voters prior to the June primary. The result was record voter turnout by absentee ballots. "People voting in large numbers? We can't have that!", said the Republicans. "Let us strive to insure fewer people vote by cutting down early voting times, and require all sorts of voter suppression measures." So they set up a deal where the person in charge of elections in Iowa must ask the Legislative Council for permission. Well, he did and they said, "OK, but you still can't send out absentee ballot requests that have information on them that belong to each voter and nope, we're not gonna extend voting times..."

Now comes the education part of this. Filling out the form is easy...sort of. But you must fill it out correctly or else your county auditor must contact you by mail to get it right and we don't have a bunch of time.  Voting should be easy...but it isn't because the ruling party sees it as a threat.

Sorry this is late. Last week Kizzy Bird had surgery to remove a mass from her left wing. Odd but necessary. We're still waiting for test results. The vet issued a "cone of shame" that was made of hard plastic that was to go around her neck. Except she couldn't walk, eat or drink. It was awful. So we took it off and actually slept with her...well sort of slept until 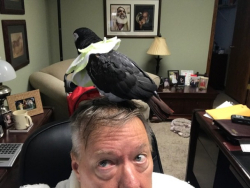 we could fashion a collar that was not as restrictive. And, because we wanted her not to pluck at the incision we had to have her with us all the time. So, yep, been working with Kizzy in the office every day and hanging out with her every night.

Last night was the first time since Tuesday night that I got to sleep in a bed...without a bird.  She is doing fine, as of this writing but that is why Sunday Morning Coffee is coming to you at Brunch.

Thanks for reading and have a good day!