Welcome back friends and foes to Sunday Morning Coffee...some of the political stories you've seen or, perhaps, missed all laced with

my commentary. Why? I dunno but it appears that some folks enjoy reading this.  If you wish to share, please do and if you have a comment feel free to unload.  Let's go.

The most recent figures indicate over 154,000 Americans have died due to both COVID19 and the awful response cobbled together by federal and state governments. Here is Iowa, where we love our hogs more than our people, the coronavirus has killed 872 people and infected nearly 45,000 Iowans. But, hey, it ain't no big deal...right? Unless, of course, one or two or three of those who have died are friends or family members. Then it's kind of personal. Besides it's much more important to save the economic fabric of our state and nation. Oh, wait, that's right, we have failed there too as our national GDP fell by 32.9% in the second quarter.  Pass the vodka.

Liquor sales are, get this, down. Seems that folks are drinking more in the luxury of their homes (if they have one...more on that in a moment) however even a spike in liquor and grocery store sales doesn't make up for the lost consumption in restaurants and bars. Where, by the way, in a recent survey 62% of Americans say they are avoiding those establishments as well as coffee houses. 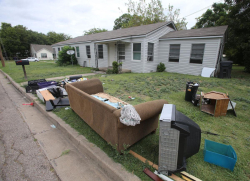 It's over for most. Talking about the moratorium on evictions. Back in the day, when the brightest among us thought COVID19 would be a passing fancy, there was legislation enacted that banned forced eviction. Hell, even the "eviction courts" closed down. But now it's "Open for Business" and the lousy thing is folks that are unemployed have now lost the extra $600 a week in benefits which was keeping so many afloat. We are such a caring nation...."Let them eat cake" comes to mind. (Image: Waco Times Herald)

You hear it all the time from the lemmings who follow "45" and his evil bunch. "Everybody knows that that 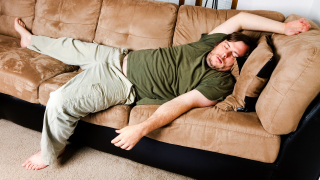 extra $600 a week in unemployment benefits keeps people from going back to work. We've gotta shut it down and make America work again!" Well, guess what... that is not accurate. Last week I reported on a Yale study that says the additional unemployment benefit does not keep people from going back to their jobs at any higher rate than folks not receiving the benefit. But, I know, who the hell is going to believe a bunch of scientists and economists when it is so much easier to spew stuff out of your ass. Weary.

One more thing...just to drive all of this home. There are, today, not enough open jobs out there to absorb all of the unemployed workers. Many businesses are finding out they can continue, even at a reduction in income, because their employment expense isn't as high as it once was. And, if you've got over 24.5 million (and that is a low number according to some) unemployed and only 15 million jobs...well, do the math. Here, if you wish, is an interesting article on that point. 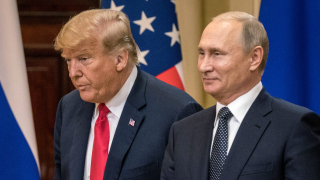 The evil that sits in the White House tweeted out more policy the other night. He is ordering 12,000 troops currently stationed in Germany to leave. On the surface it is yet another attempt to punish our allies and offer a gift to Vladimir Putin, who, by the way, just insured his presidency (dictatorship) until 2036. Something that "45" envies and would love to do. It's all about "Germany not paying its fair share to NATO" said the president. But the real reason is yet another gift to the Kremlin who is making all sorts of political hay about the decision saying that fewer Americans in Europe is good for the stabilization of that region. Sort of like fewer Russian troops in Ukraine might offer some stabilization? Weary.... (Image: USA Today)

Meanwhile on Thursday former Vice President Biden tweeted, "You won't have to worry about my tweets when I'm president."  I like that.

Speaking of winning the state of Louisiana is now a "hot spot" with escalating coronavirus cases in what is being called a "second wave". The state now leads all other in the number of cases per 100,000 residents. And that number is: 2,463 per 100K. But, unlike other states this is now the second wave. Louisiana, back in April, was reporting 237 cases per 100,000 residents. Gov. John Bell Edwards (D-LA) took a bunch of flack when he imposed a "stay at home" order back in the spring. So the state relaxed those orders under pressure by business and industry groups and now we have...this.  Edwards is continuing restrictions on bars and a mask mandate and has not ruled out further restrictions. 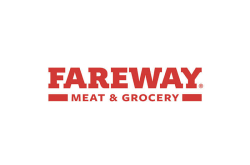 The grocery store chain, Fareway based in Boone, Iowa, has decided it will not take back cans and bottles due to a "significant health risk to employees". But here Gov. Kim Reynolds (R-IA) is demanding that schools reopen with students in the classroom. Meanwhile the Des Moines Public Schools wants to push back the opening date by two weeks and do virtual teaching. We'll see how that plays out.

Also, the City of Urbandale passed a resolution, that was signed by Mayor Bob Andeweg, to "encourage the use of face coverings". Sort of like encouraging you to obey the speed limit because as we have all learned "speed kills". But, clearly not COVID19.

Give Me Liberty of Give Me Death

OK you got your wish. Yesterday a friend sent a video out to my Bride of a long, long line of cars parked near his neighborhood. Was somebody sitting shiva?  No...it was a pool party. But hey, why not.  Adventureland in Altoona is promoting "Reclaim Your Summer Concert Series". What could go wrong?  But, I did think the act that played this past Friday was inspiring: Arch Allies & Hashpipe: A Weezer Tribute".  Prophetic?

The libraries are still closed and that sucks. But, it makes sense. Who in the hell would want folks to learn stuff.

Do you get trolls?  I do...and it's kind of fun, really. Folks make some of the most outlandish statements and then, given time, how foolish they end up being.  One guy posted that we are "no longer calling this a pandemic because fewer people are dying".  Stuff like that. I never respond...why feed them? But it is an interesting glimpse into the alternative reality in which they live.

Black Lives Matter - Did you notice that since the "goon squads" from the federal government left Portland things have calmed down?  One of the things that is disturbing to some is that BLM is worried that focus is being lost. Maybe but I can tell you the passion is still high in Des Moines. Last week the Windsor Heights Democrats heard from Kameron Middlebrooks the president of the Des Moines NAACP who gave an passionate response as to how the "majority culture" can support their drive for economic security and several other "game changers". It really was good and I would encourage any group to see if you can get Kam in on a ZOOM meeting.  You will not regret it. Also, membership in the Des Moines NAACP is only $30 a year.  Here is your link to join...  Join us.

Hello Michael!
Long time.... no see!
But still reading your wonderful articles!
Speaking of my hometown of Boone and Fareway.... Fareway is NOT a favorite right now. It took 3 weeks of complaining to management at the Boone store to get them to require their employees to wear masks. At this point, they still have NOT issued a mask mandate for all customers to wear masks.
This former Critical Care RN/Director of Nursing is really fed up with that kind of attitude. But, what am I thinking???? We all know Fareway is a huge supporter of the GOP and if republicans in power won't wear masks, why should Fareway demand it?
SO very frustrating.
Hope we all live through this.... stay safe!