Gather around my friends and grab a hot cup of Sunday Morning Coffee...mixing politics with a bit of religion for over a decade. I get to

write about the stories you've seen or, perhaps, missed all laced with my commentary. It's what I get to do while you're snoozing. Enough...let's go!

It Was A Grand Convention

The 2020 Democratic National Convention held my interest each night. Gone were the crowds and the noise. Every speaker, it seemed, was speaking directly to me. Oh, I get it...those of you who have actually been to the convention long for the friends, the noise and the
excitement...oh, and the parties. But this was a fitting way in which we got a healthy dose of policy and purpose. Loved the panel discussion with Sen. Cory Booker (D-NJ) with the others who were locked into the very long primary season. It was refreshing and, frankly, fun.

The no-holes barred speech by Michelle Obama and the measured address by President Obama were both a call to action and sanity. Then on Thursday night Vice President Joe Biden spoke. As my brother said in a phone call after the speech, "Where in the hell has that been? Had he unleashed THAT during the primary season it would have been lights out long before the election." He's right. It was both emotional and on point. Now the question is, "Are you ready to go to work?" We've got 73 days...73...to right this grand ship.

BTW, if you had not yet seen this...you should:

The S*it Show ramps up tomorrow evening. Four nights of lies and bluster designed not to bring a nation together but to further divide us. Take your meds and pop some corn... Looking at the line up of speakers I noticed that Gov. Kim Reynolds (R-IA) one of the most ardent fans of "45" isn't scheduled. I understand that she's too busy trying to figure out her latest attempt at "COVID Math".  Weary.

By Thursday evening "45" couldn't take it anymore. So he called into the Sean Hannity Show. Sean is always willing to allow the president time to spew garbage and he didn't disappoint. At least four times during the broadcast "45" talked about how the upcoming November election is going to be a "fraud". "You know, Sean, they are sending ballots out to who knows who. Even dead people are getting them. They mailed out 50 million ballots to nobody knows. I'm telling you this is going to be the most dishonest election in history!" Clearly "45" is setting it up so that when he loses he can claim that the voting was rigged and we'll have yet another battle on our hands.  It's sad that the president doesn't seem to know the difference between a ballot and a ballot request. But, make no mistake...he knows and he's just feeding his base. Speaking of which...

I will admit to you that among my several thousand Facebook "Friends" there is a small group of "Christian Patriots" and "MAGA Forever" folks. And...oh my. It's entertaining, and a bit scary, to read their screeds. One of the increasing themes is that if "45" loses in November there will be armed resistance against the incoming Biden Administration. "If we are denied at the polls in this fake election

we're ready to go to war..."  No joke. Meanwhile the conspiracy theories that are shared are also..."out there". The "Deep State" rant is pretty regular so too is the not so veiled accusation that Democrats engage in the traffic of children for sex. All of the hallmarks of way too much time crawling the Web looking for conspiracy theories that match their political bent.

Here is another interesting thought. Shakespeare, in Hamlet, offers this well known line: "The lady doth protest too much, methinks". It's a common way in which people indicate doubt concerning someone's sincerity.  Ever notice how many folks that rail against LGBTQ issues, pedophilia, and minorities seem to have a secret life?  Just throwing that out there...

Go Back To School!

It's official, the Des Moines Public Schools have joined the Iowa City Public Schools and the Iowa State Education Association in taking Gov. Kim Reynolds (R-IA) and her administration to court regarding her demand that schools open up for in person learning. A hearing is scheduled for 3 September. The interesting thing is, and I'm not an attorney, that, from my understanding, the law is pretty clear on who  makes local education decisions. 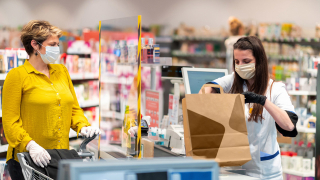 I was reading a news account, on line, about the decision of the DMPS to join in this effort and was struck by a comment made by a very angry citizen: "I don't understand these teachers and why they are so fearful of teaching in person. I'm an essential worker and so too are my kids, we work in a grocery store, and we come into contact with all kinds of people and you don't see us not showing up to work!" Well, there is a slight difference. Those essential workers, whom we are all grateful for, in your grocery store have contact with people, most of whom now wear masks, for only a few minutes. Meanwhile in the petri dish we call a classroom teachers are in a room with dozens of kids every day, for extended periods. Have any of you been to anything lately where kids are gathered? There isn't any social distancing or masks or even adults being adult and demanding the kids be safe. It ain't happening. Here is the prediction...especially here in Polk County...I'll give those districts maybe two weeks before they are forced to shut stuff down due to community spread. I know teachers want to teach and kids are eager to get back to school but...had we taken all of this more seriously months ago...we might....might....be prepared to open up. But the governor failed. (Image 6ABC)

Speaking of failure. The Governor of Iowa had her "Katrina Moment"...or should I say "Katrina Days". It took Gov. Kim Reynolds (R-IA) 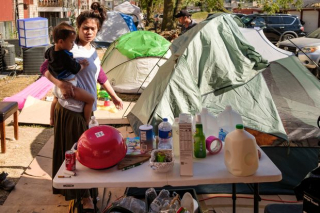 days before activating the National Guard to help in storm clean up. It took even longer for her to request federal aid. And it took her several days to even visit the states second largest city that by all accounts is in tatters. I was listening to City Administrator, and one-time Des Moines resident, Jeff Pomerantz talk about how during the last flood about 7 square miles of the city was impacted. However the storm impacted 75 square miles of Cedar Rapids.  Even today they are still struggling. What a failure...and so many are giving her such good marks on her handling of the state. Weary... (Image: Wall Street Journal from 22 August 2020)

Meanwhile the devastation to the corn crop is going to be another hit for farmers. Already reeling from low prices and exports Iowa farmers are taking stock of millions of acres of ruined crops and livestock.

It's going to be sunrise in a few minutes...need to get this posted. My Bride got back from her extended trip hiking and back-packing the Porcupine Mountains of Northern Michigan. By all accounts it was a great trip and, from the photos I saw, the area is beautiful. No injuries but one tired lady. She "zonked" for about 11 hours Saturday night and then spent hours yesterday unpacking and repacking her equipment.  Last year the Grand Canyon this year the Porkies.  Got to hand it to her.