have seen, or missed, all laced with my commentary. Why not...right?

Be Afraid, Be Very Afraid

Following the Democratic National Convention the president as asked if he watched any of it. He said, of course, that he didn't but then said it was four days of "...dark, very dark speeches..." He went on to tell us that the Republican National Convention would be "uplifting" and "positive". Well, of course he lied....and that's not what happened. If you watched any of it, and I did, the message was one of fear. You were, time after time, warned that there would be no "law" no "order" and that if Joe Biden and the Democrats are elected it is the end of the American civilization.  You will lose your freedoms and the United States will crumble under the weight of socialism. Weary... 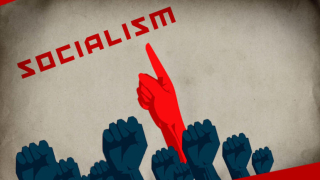 You're going to hear plenty about "socialism" over the next 64 days. So, what is it?  Socialism is your fire department. At one time only those that could afford fire protection by paying for it...got it. No longer. Socialism is your police department, your trash pick up, your roads, bridges, schools. None of us pay "privately" for that...we all chip in. Socialism sent Americans to the Moon...and back. Socialism created and maintains our national parks and historical sites. Socialism is our agriculture system propped up by subsidies.

This "rugged individualism" that you and I are being fed is hog slop. But it "sounds" good.

So, if "socialism" works so well for nearly everything in our lives...how about health care or a shared economy where the wealthy and major corporations pay up what they really owe?  Oh, no...can't do that because that would not be American. Weary....

Doesn't Bother Me At All...

The other day on National Public Radio Michel Martin visited with three young Republican delegates about their party's convention. Sitting down to discuss politics were Jessi Rapelje, Hayden Padgett and Maria Vasquez. If you want to listen, here is a link. 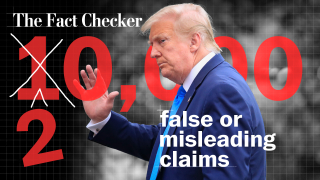 daily basis and especially what he said during his (very long) acceptance speech. Here is what was said:

Michel Martin: "...I'm talking about outright false statements, like the fact that - saying that, you know, the economy - this is the largest tax cut in history. That's not true. Saying that the economy was lagging when he took office - that's not true. Saying that he protected people with preexisting conditions when, in fact, you know, Republicans have been trying to repeal Obamacare, and when Republicans had both houses of Congress, and the presidency did not present a replacement bill and still haven't.  So I just have to ask, did any of those things bother any of you about this convention?"

The answer was basically, "nope". The three young Republicans simply denied that the president lies...all the time.  But the best line came from Jessie Rapelje of Virginia when she said, "I think that the president did focus on facts. I mean, the fact that we're pulling out and dicing three statements or, you know, a handful of statements out of four nights of a convention of really, really solid policy-based speakers I think points to the fact that, you know, we can go back and forth on these small issues."

There you have it. It doesn't matter. Income inequality, health care, the economy...they are all, according to Ms. Rapelje "small issues".

That's about all you need to know.

There Is A Difference

We've all heard it. Maybe from our parents or a teacher or a coach or our spiritual leader: "Admitting that you are wrong is a positive step toward true leadership." It would appear that Gov. Kim Reynolds (R-IA) was never was told that or she has forgotten. Cleary the young 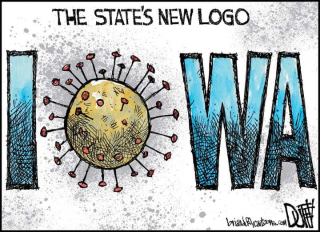 woman is floundering as people in Iowa die. Hell, we're even making national news as the number one state in the nation with more positive COVID19 cases per 1,000 people.  Nice going.

Last week Reynolds closed bars in six counties...never mind that 93 counties are wide open and never mind that to get to one it doesn't take a full day of travel by horse. And she refused to issue a mask mandate because it is not enforceable. Well, Menards enforces it. Costco enforces it...  But this is about more than masks. This is about the abject failure of this governor to pay attention to science. It is about her fawning over the president and caring nothing for the people she was elected to protect...and serve. She is the poster child for failure.  We can start reining her in come November.  You've got to flip the Iowa House and get really close in the Iowa Senate. (Image: Brian Duffy)

You can get tickets ya know. Confirmed speakers are Speaker Nancy Pelosi (D-CA) and former mayor and presidential contender Pete Buttigieg. It's a virtual and in-person (Socially Distanced) event.  Here is a link for tickets and I can tell you they are selling briskly.

I've seen plenty but I've never witnessed a nation, state, county, community so divided. And, it is killing us. You would think something this horrible would pull us together. But it has not...and that makes me very weary.

On a positive note...I get to go out and sign up voters today. Also get to encourage people to send out a request for a mail in ballot. See ya on the street...and have a fantastic Sunday.