Grab a cup...it's time for Sunday Morning Coffee! Some of the political and religious stories you may have seen, or missed, all laced with

my, usually, acerbic commentary. It's a great way to kick off the week.  Right...

Maybe we should just give up and let "45' rule until 2036 just like his pal Vlad. I mean, who the hell needs stuff like the courts or congress anyway? That's what happened yesterday as our Dear Leader signed off on what he is calling "bills" that bypass congress. Once upon a time in America it was up to the House and Senate to dictate the public purse. But, it seems no longer. I get it that the GOP is all of a sudden worried about spending too much money on struggling Americans and I get it that they are more concerned about COVID19 lawsuits than helping the economy. They are a sick bunch.

All of this concern about the deficit is laughable. Remember the "Tax Cuts and Jobs Act of 2017"? That was the signature piece of legislation signed by "45" that put billions into the pockets of the wealthy and their corporations and left you and I with crumbs from the table. Nobody, then, was worried about any silly deficit.  But, now that everyday folks are struggling getting them help is simply a "bridge too far".

One of the reasons we're losing the battle against COVID19 in the United States is because "45" and his minions live is an alternative universe. With over 1,000 Americans dying each day the president once again last week said the virus was "just going to go away".  But even that was bested when he said five little words during the Axios interview with Johnathan Swan: "It is what it is." That is how much this guy cares about you and your family. And there are those of you who support him.

I get to live in a really wacked state but, from time to time our little "fly over" makes national news. Like in February when hoards of writers and commentators skewered the Iowa Caucus never mind that is was a massive success for getting people engaged.  Well now we're making big news as people from Northwest Iowa throw caution to the wind and party like it's 1999 in Arnold's Park the tourist mecca known for the Iowa Great Lakes.  Which, when you're from Michigan, looks more like farm ponds. But, I digress. Hundreds of people have been having parties, crowding into bars and restaurants. Zero social distancing but plenty of belief in Jesus. Well, Jesus and "45" anyway. If you want to read the Vox piece here you go.  But this should surprise none of us. That's the same part of the state that kept sending Rep. Steve King (R-IA) back to congress.  Well done. (Image: Vox) 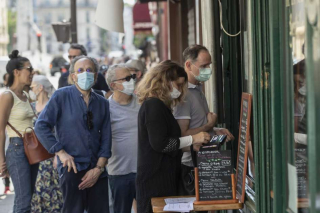 When I moved to Iowa decades ago I was struck by the fact my friends in the Republican Party were all about something called "local control". That cities, and towns could pretty much make the rules up as they go without much interference from state government. That, now, has changed. Gov. Kim Reynolds (R-IA) is taking a page from her idols playbook and demanding that cities not attempt to protect their citizens with ordinances that require masks in public. Or that school districts must not decide when/if to open for in person classroom instruction. No, damnit the governor knows best.  I mentioned that in a FB post and my friend and attorney Joseph Fernandez opined that in reality "local control" was a tool to discriminate against people of color when it came to housing and jobs.  Could be and that might explain the rational. (Image: SFGate)

Last week Iowa became the last state in the nation to grant felons the right to register and vote. People are really pissed that the executive order signed by Gov. Kim Reynolds (R-IA) does not force felons who have paid their debt to society by being released from prison are not forced to pay restitution to those impacted. I'm thinking something about Jesus might be involved.  I dunno but surprise, surprise...it happened.  We'll see what the next step is when the Iowa Legislature, that has been dead set against this, gets back to town. 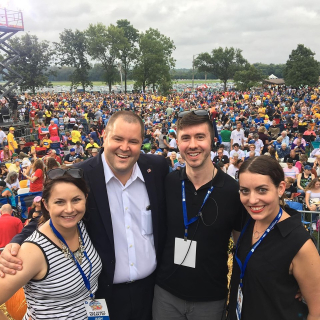 It's a go.  For those of you not from Iowa the Harkin Steak Fry was a big deal. For years former Sen. Tom Harkin (D-IA) would hold this massive gathering where folks running for national office would come and hob-knob with us Iowans.  When Tom left the Senate the event ended. Until the Polk County Democrats decided to host it in Des Moines. Sure, there were doubters but man...it's a real deal. Last year was the largest by far with several thousand people at Water Works Park.  This year, due to COVID19, there are plenty of changes. But the event is happening on the evening of September 12th. (A change from Sunday the 13th.) People will stay in their cars (think drive-in movies) and their food will be delivered to them. If folks don't want to go in person they can opt for the virtual event and stay home. Tickets go on sale later this week at Polk County Democrats.  Stay tuned.

Gotta get this out kids.  My Bride is headed north into Michigan for a week of back-packing in the Porcupine Mountains off the shore of Lake Superior.  Last year it was the Grand Canyon. I hear the nighttime temps get down to about 40 degrees. No air-conditioning needed. Why does she do this stuff? I dunno..but I truly admire her for it.