Snow on the ground in Central Iowa...why not...right?  Welcome to Sunday Morning Coffee a look at some of the political stories you may

have seen, or missed, all laced with my commentary. Let's go...

I wonder what she saw? Oh, sorry, I'm talking about Gov. Kim Reynolds (R-IA) who is so far up the presidents butt that she must have had a good look. As you may know "45" was in Iowa at a coronavirus rally last week and who was there giving him an adoring look and a full throated , maskless, endorsement?  Yeah...her. I've been asked by several this week who is going to run against Governor Reynolds in 2022. Other than State Auditor Rob Sand (D-IA) who I think will...I'm not sure. I do know that former U.S. Senate candidate Admiral Mike Franken has been talked about.  If you have a better suggestion let's get going the election isn't that far off and this woman has to go.

Speaking of "going" did you hear about the "wack-job" who was arrested yesterday because threatened to kidnap Mayor Brandon Whipple because of a "mask mandate" in that city? The hate out there is real. After all when domestic terrorists got together in Michigan and planned for the kidnapping of that state's governor. You know there are deep troubles. 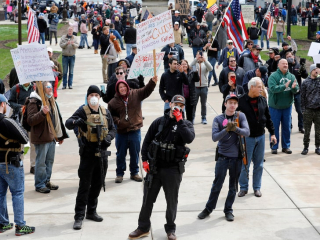 I thought this is an interesting take on that domestic terrorist issue there. My brother says he "understands" what is going on and here is his summation:

"Imagine living in a small town where the economy has been decimated. You don't have a job or really any future for a job. Maybe you spent some time in the military, because that was the only option for you being white, poor and uneducated. But then you get out. Perhaps bounce from one low paying job to another and the frustration builds so you seek the comfort of others who feel they have been marginalized. Once the Commander in Chief gives the green light to "LIBERATE MICHIGAN" you take is seriously and start to put a plan in operation. I get it. I don't agree but I do know there are those people out there and they long for a civil war."

No Love, No Tacos

Did you see that Marshalltown, Iowa made CNN?  It's the story about Alfonso Medina and his

restaurant, La Carreta, which has been serving Mexican food for 20 years. Not long ago Medina put a sign outside of his restaurant that speaks to issues of equality. i know you've seen them...they are all over the Des Moines Metro.

That simple act resulted in a number of hate messages on social media and letters, unsigned, that were directed at Medina and telling him that they were angry at him for the sign and that it "insults and disrespects Christianity and America."

In response Medina wrote on Instagram, "We're sorry your burrito had to get political, but it was the only

way y'all would listen. No love, no tacos."

Now there are t-shirts with that message and Medina has put up a billboard with those words. It's sort of a movement. Now Alfonso says he will close his restaurant on Election Day and pay his people their wages so they can go and vote. "It's what we should do across the U.S. because it's important that we vote."  If you want to read the CNN story, here is that link.

I was on the phone last week with a friend who was telling me that now, with the COVID19 cases going down in Iowa, we should be rounding the bend and things will soon get back to normal. At first I thought he was joking and when I said that wasn't the case he insisted that he had heard the pandemic in Iowa was under control. I suspect he is watching the governor and her mighty team as they continue to downplay the virus and that's troubling. I did get a text from him later in the day saying, "I was wrong COVID19 cases in Iowa are rising." And, that is just one person...there are thousands of others who are being misled.  At least he looked it up.

I've not held a person to person interview for my newscast, Insight on Business the News Hour, since the middle of March. That has turned 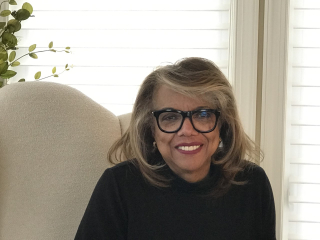 out to be a blessing of sorts. Sure, from time to time I would do a phone interview with someone from a different part of the country from where I was at the time but, for the most part, I was tied to my geographic location. With COVID19 I became "liberated" and had to do all of my interviews in a virtual environment. It's been really fantastic. But, I do miss that personal interaction.

That's why my visit last week with my dear friend and former State Representative Helen Miller (D-Fort Dodge) was so wonderful. We talked a bit about politics, Sen. Kamala Harris (D-CA) made a stop at her home before the primary, and then spent a delightful thirty minutes talking about the Iowa State Parole Board which she chairs. I learned much and it was so neat to connect and yes, we wore masks and were socially distant.  But I did get her to remove her mask for this shot and a video that will be sent to Charles Clayton who is running for the Iowa House in Fort Dodge.  Thank you Helen...for so much.