Welcome to Sunday Morning Coffee my weekly review of the news stories you may have seen, or missed, all laced with my commentary.

It's what I get to do and, what the hell, it makes my Republican friends...angry.  Truth hurts. Let's go...

Take another look at the date. It was 57 years ago today that President John F. Kennedy was murdered in Dallas. If you are old enough to remember that date you, no doubt, know exactly where you were when you heard the news.  I was in a 7th Grade English class when the teacher walked out of the room. She had been called out by the principal who was, I learned later, going to each classroom the share the dreadful news. When she came back in the room tears were rolling down her face and she told us, between sobs, that the president had been killed. School was dismissed and the nation mourned those four days until the burial on the 25th. Such was November 22, 1963. 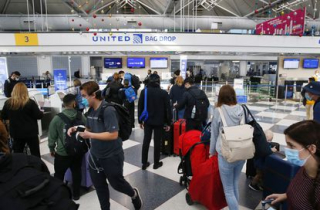 What Is The Matter With You?

It is Thanksgiving week and millions of Americans are traveling for the holiday. Never mind that we're experiencing 200,000 COVID19 cases a day and that death is taking out roughly 2,000 a day. Yet...you are traveling for the holiday like nothing is going on? The denial is stunning but even more is the selfishness. "I wanna to see my kids." "I wanna have a nice dinner with friends and family." Well, know what? I would like to see you alive and not burdened with thousands of dollars in medical bills.  I would like you to actually think about others that you may come into contact with following your family-spreader adventure of turkey and ham or whatever you are planning.  Weary. (Image - Chicago Tribune) 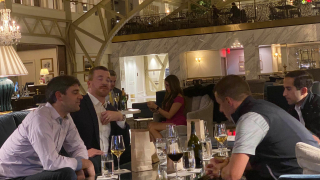 I've written before about how my home state of Michigan is a looney bin of right-wing nut jobs. Last week several GOP state legislators were summoned to the White House to talk...turkey.  It's the latest ploy of a desperate president attempting to stage a coup. After their meeting the Michigan legislators were photographed downing Dom Perignon at the Trump Hotel in D.C. The champaign goes for $750 a bottle. Two things stand out: 1) How much tax money went to the maskless party and who paid? 2) Do you see the hypocrisy of this crowd as thousands line up in a "bread line" in Dallas?  Here's the deal.  If you support this mob if you vote for these people you are enabling the worst of us.  Seriously?  How can you call yourself a "Republican"...you are part of the problem. (Image - KXAN)

I was going to write about the foolishness but decided against it. We've all been watching the clown show for days. The G-20 did have a meeting to talk about COVID19 and the world response. The president took a pass and went golfing.  And 70,000,000 voted for this guy. Says volumes. 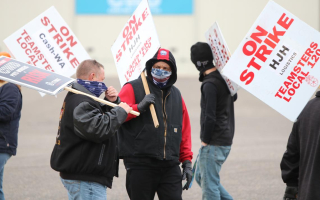 You might have heard about this place. It is a country just south of Canada that is the leading the nation when it comes to COVID19 infections. In fact North Dakota last week reported more coronavirus deaths than any other state or nation. More than one in 1,000 people there have died. Nobody much cares because not many people live there...and there is soon to be even fewer.  Sad, but true. Right now there are 75 striking Teamster Local 120 workers on a picket line outside of Cash-Wa a food distribution center that supplies products for 10,000 restaurants, hotels,hospitals and schools in several states. The company is privately owned by the Henning family and Tom Henning is the CEO.  The workers there have been without a contract since March. They are working in unsafe conditions with no temperature checks, no hand sanitizer stations no social distancing.

North Dakota, like Iowa, is a "Right to Steal" state where union activity is frowned upon and strikes are rare. The media is concerned about food shortages...now. Meanwhile we're learning that here in Iowa Tyson supervisors were making bets on how many people would test positive in their stinking meat processing facilities. Not caring one bit about the people working there. Let that sink in.

Teamsters Local 120 represents 11,500 workers in the Midwest. There should be a way to contribute to their strike fund.  If I find a link I'll pass it along.

As long as we're talking about what is possible here, once again, are the websites so you can send a donation to Rev. Raphael Warnock and his election bid for 5 January and for Jon Ossoff. BOTH are solid Democrats and with their win we can move forward in the U.S. Senate and help Joe Biden and Kamala Harris carry out the work that needs to be done in this nation.  So...please take a moment and chip in for victory.

I worry. Maybe it's a Jewish thing? I dunno but I worry about you. I worry about my co-workers, friends, family and the thousands of people I've come into contact with over the years. I just want you to be safe and healthy. And I worry that you are not paying attention. I worry that following Thanksgiving we'll see yet another surge of infections and then, because of the Christmas Holiday we'll see even more. Oh, yeah...then we've got New Year's....  Please wear a mask, refrain from gatherings, wash your hands. If you want to do something positive write and call your U.S. Senator and demand they take this seriously and pass a stimulus bill that can help America stay whole. We need...the time.