Where do you start? It has been a week like no other and that from a person who has been active in protests for decades. Welcome to

Sunday Morning Coffee. Sit back and enjoy the ramblings of a (just like you) socialist. More on that later.

For those of you who are "shocked" by the white terrorists who descended on the United States Capital last week I have one question: Why? You didn't see this coming? For years "45" and his enablers have been fomenting this very action. The Republican Party the people who voted for him and those who carried his water knew exactly what he was...and is...a "Mob Boss Thug" who will say and do anything including a inciting what played out in Washington D.C. and what is still being planned ahead of the inauguration. Now is the time when these criminals must be shown the door. We can start with Sen. Ted Cruz (R-TX) and Sen. Josh Hawley (R-MO). When are you good people going to grow a spine? 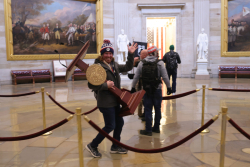 Meanwhile the FBI is busy rounding up the assholes who took part in the riot. Thanks to the many photo journalists who were on the ground taking images of the insurrection it's pretty easy picking. Like the grinning idiot who paused for a photo as he walked away with Speaker Nancy Pelosi's lectern. Who happens to be a father of five and the husband of a Tampa Bay physician. Rot in jail. Or the guy from Iowa who chased a, black, capital policeman up the steps of the Capital.  In jail. Now, what must be done is make sure we get as many as we can. This can not stand. If we don't take care of this now...we will lose.  Even our allies are watching and hoping we survive. Justice my friends...justice.(Photo: Getty Images)

the white nationalists who stormed the Capital. The new video shows these scum beating and then dragging Sicknick face down...down the stairs. No, I'm not going to share that video...you can find it yourself however here is a still shot. Oh yes, there were some "very fine people" there.  How do you feel about that you "law and order" folks?

She Has No Soul

Meanwhile, here in Iowa, Gov. Kim Reynolds (R-IA), the day after the insurrection, said she condemned the violence but (and this is important) said she was "troubled" by the "lack of transparency in our election process". You know what she is doing...right?  She is still on the train and still carrying water for "45". And in just days the Iowa Legislature will convene and you who are elected will bow down to this person while many of you will continue to chip away at the rights of working families with even more draconian laws. If I were in the legislature I would simply ignore this woman. She is a danger to our state. 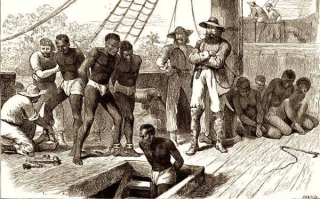 While you clutch your pearls in horror let's visit the filth of our "Original Sin" and something you seem unable to see. White people, unable or unwilling to do the work, purchased other humans, put them in chains and traded them as if they were cattle. It is called slavery. Meanwhile do to "Manifest Destiny" the United States drove the indigenous people from their homes and into "reservations" claiming that G-d had ordained the action because, of course, white people are superior. You don't believe me...look it up. Maybe now is the time to talk about reoperations. I'll start. Let us begin by paying every black adult and every Native American adult in the United States $2,000 a month. The "white folk"? We'll offer you three-fifths or $1,200 if your income is below $400,000 a year.  Three-fifths was "right" two hundred years ago...seems it would be OK now.

Isn't this special...  Gov. Pete Ricketts (R-NE), who BTW is the son of the founder of TD Ameritrade so the silver spoon ain't far from the table, has said that "illegal immigrants" in his state would not receive the COVID vaccine so that it would be available to "legal citizens of Nebraska". Remember many of these immigrants are responsible for the food that you buy and it was "45" who ordered these "essential workers" to get back to work. Looks like they are only "essential" when we want them to be. What might happen, my friends, if they all decided to take two weeks off?  A general strike. Never mind...enjoy your fried chicken. 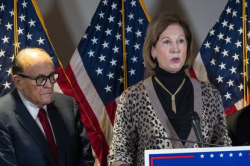 Meanwhile the lawyer Sidney Powell who was out there spreading baseless conspiracy theories about the "rigged vote" just got slapped with a $1.3 billion defamation lawsuit brought by Dominion Voting Systems. If you remember she said that votes were "changed" from "45" to Joe Biden and that the voting system had strange ties to Hugo Chavez the strongman of Venezuela who, by the way, died in 2013. Uhm...nope. Here is what part of the lawsuit says, "Far from being created in Venezuela to rig elections for a now-deceased Venezuelan dictator, Dominion was founded in Toronto for the purpose of creating a fully auditable paper-based vote system that would empower people with disabilities to vote independently on verifiable paper ballots.” Pay up Sidney...there is a price for being stupid. (Image - Chicago Tribune) 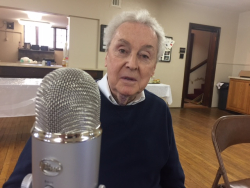 On Friday afternoon I got a call from my friend Peter Children of Mason City. I get to visit with Peter several times a week about business. He is 85 and works Universal Products every day. But, on Friday it was different. He was worried. He told me he had been blacking out several times a day and that the batteries in his pacemaker we weak.  As we talked he told me he had an appointment to get new batteries installed on Tuesday of this week.  Tuesday! I did something I rarely do...I shouted at him that he must, must, get himself to the hospital right away and get this done. "Hell, Peter, you could be dead before Tuesday!" He took that advice, checked into to Mercy Hospital and within hours got not only new batteries but a new device. I spoke with him again this morning and he is feeling fine and back to talking about...business. Yeah...it was a pretty good week.