Welcome to Sunday Morning Coffee and the news stories you've seen or perhaps missed all laced with my opinion.  It's what I get to do

before the sun comes up. Shall we begin?

Last week President Elect Joe Biden took to the airwaves and gave not one but two national speeches. In the first he laid out plans for a $1.9 trillion economic rescue plan meant to restore the soundness of our 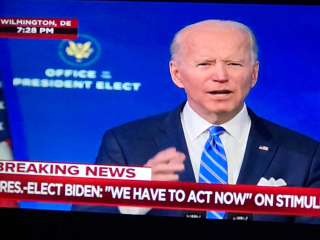 overall recovery. From helping cities and states to extending unemployment benefits to putting more money into the hands of Americans. The second speech outlined his administration response to battling COVID19 from getting more vaccine to distribution methods to making sure the federal government takes a bigger role and is more assistive to the states. And there was zero self aggrandizing. Sound, solid and in charge.  Refreshing after what we've been through.

Meanwhile a memo sent out yesterday by incoming White House chief of staff, Ron Klain speaks not to the first 100 days of President-Elect Biden's administration but the first 10 days. Starting with returning the U.S. to the Paris climate accords to repealing a ban on Muslim travel to extending a ban on evections and foreclosures to implementing a mask mandate on federal property. "President Elect Biden will take action - not just to reverse the gravest damages of the Trump administration - but to start moving our country forward." On a day that is usually one of pomp and parties the Biden administration will go to work on "day one" just as he promised during the campaign. This, my friends, is leadership.

Meanwhile "45" is brooding and getting ready to head to Florida where he will create a fiefdom that will console him and where he hope to continue his strangle-hold on the Republican Party. Five years of bold-faced lies that tarnished our nation and our standing in the global community and led to sedition will continue. Those close to the president say that there is talk of Ivanka running for the U.S. Senate and perhaps taking on Sen. Marco Rubio (R-FL).  So much for loyalty. But, remember, if his mouth is moving "45"is lying.

And then there is...debt. This from The Hill:  "Trump is on the hook for hundreds of millions of dollars of debt, most of it due within the next four years, and the legacy of his presidency may leave him with few options to pay it off.

In the wake of the Capitol riots, the New York City government and the PGA of America backed away from business arrangements with the Trump Organization, sapping future income from the debt-laden president. Three banks have announced they’re cutting ties with him — including Deutsche Bank, his biggest creditor — limiting his ability to refinance debt."

The FBI has fanned out across the country in search of those who, on the direct instigation of the president, stormed the U.S. Capitol where five people died. Using images and video and social media posts by the insurrectionists law enforcement is rounding up hundreds of those involved. And this week we're learning that members of congress or their staff may have been party to the riot by offering tactical assistance. Stay tuned.

Speaking of Locked Up

Ironic, isn't it that, we are not only locked down by COVID19 but also locked out of federal and state office buildings. Both, by the way, brought about by marauding groups of idiots led by the current occupant of the White House. 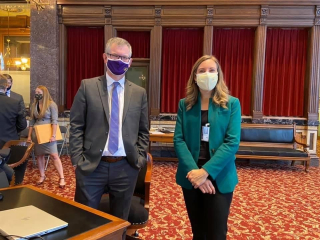 The Shame of Iowa

It was the opening day of the Iowa Legislature and the GOP, which controls both the House and Senate began their work on further eroding opportunity in the Hawkeye State. Sarah Trone-Garrott (D-Windsor Heights) started her freshman year in the Senate. One would think that with the crushing reality of unemployment, massive numbers of Iowans going hungry and an out of control pandemic that the Iowa Senate would first consider some legislation to improve the lives of the hard working families of the state. But no, Sen. Trone-Garrott tweeted that the first bill to come to her committee was to resume the death penalty in Iowa.(Image Sen. Eric Giddens (D-Cedar Falls and Sen. Trone-Garrott)

Meanwhile Gov. Kim Reynolds (R-IA) will be busy offering more tax breaks to the wealthy while further starving public education by proposing vouchers for private schools.  I wonder if vouchers for Muslim schools or madrasa are included. There are, after all, three in the Des Moines Metro. Wanna take bets?

Meanwhile Rep. Sharon Steckman (D-Mason City) reported that continued calls for the GOP Members to require masks during committee meetings were rebuffed. Think about that for a moment. They care not for others...not one bit.  We have serious work to do in the time between now and 2022.

"What Happened to Iowa?"

That was the question from a woman who now lives out of state. She had been reading news from Iowa and finds what we have become "abhorrent".  What might you expect when you turn control over the zealots that find no honor in service to others. That, my friends is the Iowa GOP.  You get what you vote for.

Last week we lit a fire in The Cowboy Room stove and smoke started to roll into the room and not up the chimney. Uh, that can't be a 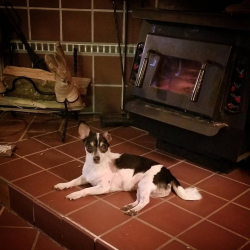 good thing...right?  So I figure the chimney must be...blocked.  After a bit of "chimney research" I made the decision to a DIY chimney cleaning adventure. Not from the top down but from the bottom up. So, $45 later with the SootEater Rotary Chimney Cleaning System in hand the work commenced. It took a couple of hours to get set up and do the work but...I can report that the effort was successful. Ain't the Internet great?

Gotta go kids....it's Sunday and there is still work to be done before we head into Monday...oh...and...FOOTBALL this afternoon. First up it's the Cleveland Browns vs. the Kansas City Chiefs at 2:05 and then the match up of Brady vs. Brees as the Tampa Bay Buccaneers travel to New Orleans to take on the Saints.

Have a great Sunday and a great week.