Just ahead of what they say will be a blizzard in Iowa, welcome to Sunday Morning Coffee.  Here you'll find some of the political news

stories you seen or, perhaps, missed all laced with my (usually acerbic) commentary.  It's what I get to do before the sun comes up each Sunday. Let's go! 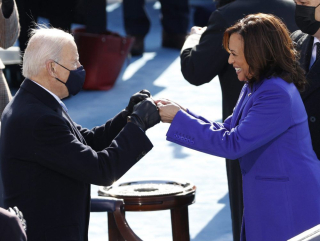 the optics of seeing Kamala become "the first" was overwhelming. For those countless workers and volunteers from every corner of our nation who spent so much time during the primary and after...every minute mattered...and in the end counted. Thank you. The inauguration event showed us what we could become and the days festivities took us all on an emotional rollercoaster. Be honest...how many of you held your breath as President Biden walked down the street to the White House? We knew D.C. was locked down but, maybe, I've seen too many movies. BTW the evening special with Tom Hanks was so much better than watching folks at the many balls. It was so well done. And, if you're looking for fireworks for the 4th of July...well, hope there are some left. Stunning! (Photo: The Guardian Leader)

Gone But Not Forgotten

When the petulant child who would be president left the White House and dishonored tradition by not attending the inauguration we knew the stain of his four years in office would remain. In his wake he has left a cadre of disciples who are hell bent to continue his slash and burn style of political revenge and disruption. His faithful say, "He did what he promised!" Oh really? The 2017 Jobs and Tax Act did little to nothing for 90% of Americans. "Oh, but he brought peace to the Middle East." Well, not exactly as much of that was well underway long before he glided down the golden escalator and into the bowels of the swamp.  No, there was not and is not a GOP answer to Health Care. No there is no massive infrastructure program in place. No there is no admiration of the United States by our allies. And those like Sen. Ted Cruz (R-TX) and Sen. Josh Hawley (R-MO) and Sen. Mitch McConnell (R-KY) will carry on because they fear the "Great Orange Man". Make now mistake the Republican Party is his party and people like Sen. Chuck Grassley (R-IA) and Sen. Joni Ernst (R-IA) will continue to carry his water and obstruct our forward progress. Watch as they all conspire to be the obstructionist party they have become since 2008. 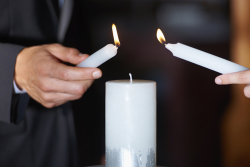 In some wedding traditions there is the custom of lighting a "Unity Candle" symbolizing the coming together of two people to form one union. (We Jews smash a glass...) Of course five or ten years later when that union starts to dissolve that beautifully decorated candle ends up in the trash bin. But, perhaps there is still unity as the now divorcing couple seek mediation. It is, after all a compromise. My point is that it takes two to unite. Right now, as this is being written the GOP is working at a fever pitch to block or overturn or obstruct any forward progress. The Rescue America $1.9 trillion proposal that will move mountains to get us out of the economic and health disaster that is destroying our nation is already under attack. If legislators can not agree to salvage what is left of the United States through a massive effort like this we are doomed. It is up to you to write, call and move this bill forward. Joe and Kamala still need each one of us.

Have you heard? "45" has sent out messages that he is wanting to create a new political party called The Patriot Party. I can't believe I'm saying this but I hope that happens. It would be a gift to the Democrats and it would be the end of the GOP. THAT, my friends, is why so many legislators, governors and party people are shaking in their boots. Let 'em stew... 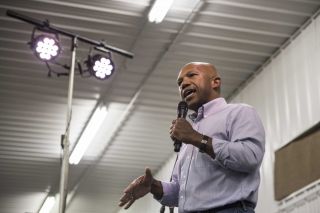 Did you notice the sea change? It is happening all around us. Look at the people who have been nominated to serve on President Biden's Cabinet. It is as diverse a group that has ever been constructed. It is...America,. Also the election of the new Chair of the Democratic Party, Jamie Harrison is sending a clear message. And, here in Iowa, where the Black population is less than 4% my friend Rep. Ross Wilburn (D-Ames) will chair the Iowa Democratic Party. Celebrate if you will...but we are not done. Now, the hard work must continue. (Photo: Daily Iowan)

Let me take you back to 2008. I was in a grocery check-out line and a woman, who I did not know, was just ahead of me. Barack Obama had just been elected as the 44th President of the United States. Overcome with a desire to celebrate I tapped this woman on the shoulder and when she turned around with tears in my eyes I said, "Isn't it wonderful about the new president? We have finally...overcome." The white man and the black woman hugged and we hoped. But it was not to be. Obstruction and racism intensified and the Obama Administration made the fateful decision that they could actually negotiate with the Republican Party.  The GOP fought every bill and many of these people, still in office today, publicly stated they would obstruct, delay and deny.

My point is that while we have moved the deck chairs in a striking fashion we can not and must not let up. We have not yet overcome and while there are powerful people in place with skin color different than mine...millions of black, and brown citizens in this country continue to struggle against an oppressive system.  We...have work to do.

Does This Make Sense? 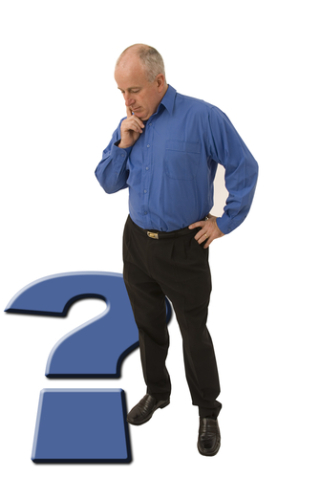 I live in Iowa, a deep Red State where common sense and science are disregarded. If you doubt it consider the many bills the GOP House and State Senate are proposing. Where just last week the Iowa AFL/CIO filed an OSHA complaint against the Republican leaders of the two chambers in their failure to protect the health and welfare of Capitol workers and visitors by disregarding masks and social distancing.

Meanwhile the state wrestling tournament is going on but at 25% capacity. University and college sports play with few if any fans in the stands. So, it would seem some are taking the pandemic seriously. With over 4,487 deaths in Iowa and another 1,368 new COVID19 cases (as of yesterday) we should pay attention.

Oh but...on February 2, 3 & 4 the Iowa Ag Expo will take place at the Iowa Events Center. For those of you not familiar with the event let me share with you that it brings thousands of people to Polk County.  I have been there many times as a displayer, as a facilitator and as a reporter. There are hundreds of displayers and thousands of farmers and their families who are drawn to the event. In fact it bills itself as the "third largest indoor ag show in the nation". On Friday I called the Iowa Events Center and asked about COVID19 protocols. I was told it was up to the promoter and in this case the Iowa-Nebraska Equipment Dealers Association. I know these folks and like them but I'll be darned if I can find one mention of COVID19 and the show on their website. Maybe I'm missing it...but on the Iowa Ag Expo site it's like, "Never mind...it's all OK."

Then there is the upcoming Iowa Deer Classic scheduled for March 5, 6 & 7.  Been there too but at least that group has PDF COVID19 Protocol list center on their website. However, having been there I'm not sure putting up to 30,000 folks in the building is such a good idea. I realize that this is the business of business but several friends of mine who are marketing to deer hunters in Iowa are concerned about sending staff.  I would be too. 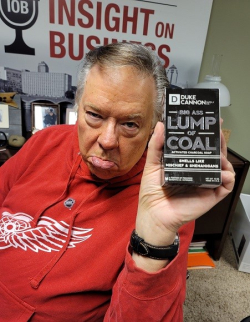 I got a gift yesterday!  Yes!!!! It is a belated Christmas gift from my Bride. And it is, as pictured a bar of soap that is called the Big Ass Lump of Coal. It's from the Duke Cannon Supply Company and not only is it high quality soap it is just one of many fun items on the site. Go ahead and have a look. You need a laugh at this point and what a fitting gift, "Smells Like Mischief & Shenanigans" on the box. Very cool and I'm here to help you.

Up top I indicated that I would share a story about Joe Biden. One that I have never shared in public. Yes, a few friends have heard the story and, I believe, it is not an uncommon story. My friend Dr. Bob Leonard a broadcaster and writer from Rural Iowa posted a letter he received from Joe following the death of his dear father.  And, I've seen the president console others at a time of grief.  If you want, you can listen because it would take way too long to write it out. Just click the player below.

Thanks for reading and for listening.  Have a great Sunday!

Michael you and I both know the old saying you can fool some of the people some of the time but you cannot fool all of the all of the time. That is Donald Trump and the GOP in a nutshell, but it goes beyond that clearly the GOP was taken over by the racist Southern white Democrats after the Voting Rights Act was passed by Congress. Those southern white racist Democrats who are now calling themselves Republicans haven't changed. The South may have lost most of the battles, but they are still fighting the war. It is time we end this war and it is time we end the Republican Party.