Welcome to the Valentine's Day Edition of Sunday Morning Coffee. Glad you are here on this very cold Sunday Morning...and, yes, there

are loads of things to ponder over your hot cup of coffee. Let's get started.

There was a book, perhaps you have read it, authored by President John F. Kennedy that detailed the courageous acts of several leaders in times of crisis. Yesterday in the United States Senate there were few 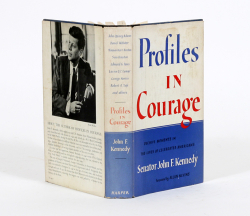 reminders of courage as only seven members of the GOP crossed over to vote to convict the former president of insurrection. You and I know what he did. We watched it unfold for months before the election as he stoked his radical base. And, then lied about the outcome, taking it to court sixty times and losing. And, just like a mob boss, threatened election officials if they didn't "stop the steal". It was obvious what he did and what the Senate should have done.

There are stories that the Republican Party is fractured. That is not true. It is, and has been, the political party of the former president. It is a party that plays on fear and anger and hate. There is no courage in cowards.  None.

There are some talented baseball players that can hit a ball batting right-handed or left. It's called "switch hitting". That was on full display last month as then the former U.S. Senate leader would not allow an impeachment trial to take place and then, after President Biden was sworn in said the former president could not be impeached because he was no longer in office. A brilliant display of "switch hitting". And  the arrogant Sen. Mitch McConnell (R-TN) then sent out the word to the loyal GOP that they should parrot his talking points and that is exactly what happened in my home state where Sen. Chuck Grassley (R-IA) released a statement that read like it came from the desk of Mitch. Meanwhile Sen. Joni Ernst (R-IA) tells the New York Times that the impeachment trial was a "shit show".  Such class senator....

I've known the senior senator from Iowa for decades. I met him, and sat with him for several hours, at a long table in the Elks Club in Webster City, Iowa when he was in congress and taking his first steps to run the the U.S. Senate. We talked, mostly, about family, farming and waste in government. He went on to win that election and when I was the presiding over the state's largest continuing care retirement community I invited him to come and speak...often.

Back then he was known as a champion, fighting against waste and fraud. Recently he has become that fraud. History will long remember how he shrank from his duty on the 13th Day of February 2021 and forget about what good he may have accomplished decades ago. Meanwhile I understand that State Senator Jim Carlin (R-Sioux City) has filed paperwork to run for the U.S. Senate when Grassley retires. Carlin is a full on bigot who is behind several bills pending in the Iowa Legislature that outright discriminates against various individuals be they be transgender or poor. Just the sort of person we really need now. 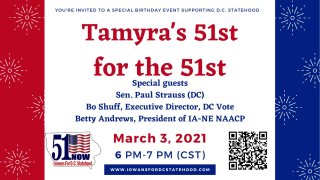 What is the one thing that can unite the GOP even more than the disgraced ex-president. How about the reality that congress will vote to move much of the District of Columbia into the 51st U.S. State? It really does cause shivers among the racist Republicans. You see there are lots of those Black People that live and work in the District and, well, you know how that plays out.  When folks of color are permitted to vote they often vote for Democrats.  By gosh, we can't have that can we?  That is also why in states that are controlled by Republicans they are rushing to pass bills that would restrict voting.

Meanwhile my good friend Tamyra Harrison is having a Birthday Party and you are invited. Tamyra is the executive director of Iowan's for D.C. Statehood and has done a remarkable job in spearheading the movement. The online event is scheduled for 3 March at 6PM Central. Consider attending.  You'll hear from Sen. Paul Strauss (D.C.), Bo Shuff the Executive Director of D.C. Vote and Betty Andrews from the Iowa-Nebraska NAACP.  Here is the link to the event. Hope you will join me. 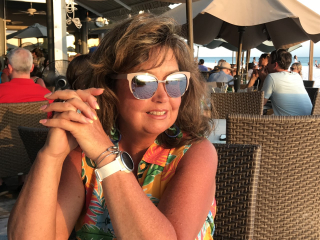 We celebrated another birthday in the family. Taylor turned 12 and we watched her, via Facetime, unroll her present. Georgie gets several rolls of cling wrap and then stuffs in dozens of little things from money to hot chocolate mix into a huge ball.  It's a great time.  Wish we could have been there in person.

And, Happy Valentine's Day to my Bride! This is one of my favorite photos of her. We were doing dinner at one of our favorite restaurants on Anna Maria Island in Florida a couple of years ago. She loves it there...and yes, I love her.  Thank you for putting up with me.