Hello and welcome back to Sunday Morning Coffee the personal and the political blog that I get to write early each Sunday Morning.

Here you'll find some news stories you've seen or, perhaps, missed along with my commentary. So, let's go and remember don't spill!

I wonder what drives the trolls to post on a Facebook Page where they know the author is a liberal. The drive to argue? To show some superior nature? To feed their bully ego? I dunno but if you follow my page you've seen them. I don't make it a point to follow and then post my opinions on their pages which are riddled with falsehoods and conspiracy theories. Why do they? But when things get out of hand I move to the "Block Button". I've had to do that more and more lately as the attacks on my friends and family become more intense.

But...back to PORK! One of the constants from the those who pay homage to the Republican Party. When the American Rescue Plan was signed into law by President Biden they came and decried "Pork!" or "If Americans really knew what was in that Bill they would be ashamed!"

Of course nobody can back up their assertions because there is no defense. It's simply the talking points they have been told to utter, driven by their cadre of talking heads that spew garbage. You know...it's true. 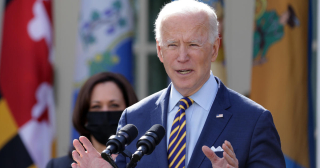 Many folks are laser focused on the $1,400 stimulus checks being sent out this weekend. Even as early as Friday we fielded reports that money was already being deposited into accounts. But, what else is in the Act that may be overlooked?  How about COBRA payments. For many Americans who have lost their job, and their health insurance, have the choice to enroll in the Consolidated Omnibus Budget Reconciliation Act of 1985 (COBRA). The problem is that if you've lost your job COBRA is just too damn expensive. So families opt out and go without. Tucked into the ARP is a provision that the government will cover your COBRA payments at 100% through September of this year.  Pork? Hardly. (Image: Getty Images from CBS News)

If you have children the Feds will send you $250 per child for kids between the age of 6 and 17. Those benefits could be coming soon and Democrats are pushing to make this Child Tax Credit...permanent.  It is said this, alone, will lift millions of children out of poverty and cut child poverty by 50%.

How about unemployment insurance benefits? Under the ARP unemployment benefits that you may receive is non-taxable up to $10,200. That is huge. Many families were not aware that their unemployment benefits were taxable and they will receive a surprise tax bill. Now that threat of families hit with another unexpected bill get a benefit. But, remember this is only for Federal Taxes your state may be taxing unemployment payments so beware.

And how about the $5 billion in the bill that will go to socially disadvantaged farmers of color? This is for farmers who are Black, Hispanic, Native American or Asian. There is $4 billion that will cover up to 120% of outstanding debt and another $1 billion designed for outreach, training, education, technical assistance and grants.  Yeah....so there is that!

And then there are the billions of dollars flowing to local schools so they can reopen. Billions of dollars being spent on ramping up vaccine and vaccine distribution sites.  Pork?  Hardly. What a difference an election makes!

The Republican controlled legislature there just passed legislation that would strip the governor (who happens to be a Democrat) from being able to appoint a U.S. Senator should one of the two offices become empty. That has fueled speculation that Sen. Mitch McConnell (R-KY) or Sen. Rand Paul (R-KY) may be ill and unable to fill their terms.  However both, this past week, stated they are fine and moving forward. But...still.... It seems "Revenge Politics" are a staple in places across the nation where the GOP are in control of statehouses.

Meanwhile the family of murdered George Floyd just settled with the City of Minneapolis for $27 million. That isn't "chump change" and represents a huge settlement and pay pave the way for other cases to move forward. Hit 'em where it hurts. But, of course cities, counties and states will simply pay their legal bills and their fines with your tax dollars. So, who the hell cares...right?

They Are Very Afraid 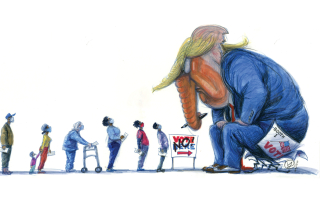 Republican controlled legislatures across the county are passing all sorts of measures to reduce your opportunity to vote. Voter suppression is top of mind awareness for the GOP. In Georgia alone the legislature is taking a direct attack on Black voters there and doing away with Sunday voting. For those of you unaware the Black Community, for a very long time, has pushed something called "Souls to the  Polls" where people, following Sunday Church march to polling places to cast their vote.  Now that is in jeopardy. Georgia is also making it a crime to deliver water to people standing in line to vote in person. What kind of bullshit is that?  It is driven by fear. Republicans know that when people vote...they are in serious trouble.

Meanwhile here in Iowa the legislature passed and Gov. Kim Reynolds (R-IA) signed into law a major voter restriction act. Of course it is going to court as LULAC countered with a suit. I wonder if Attorney General Tom Miller (D-IA) is going to defend the state?  Anybody know?

Remember when "45" began his awful attacks on Muslims? His lemmings followed up with attacks and even murder. Now attacks on Asian Americans are on the rise...up by over 150% last year. In his national address on Thursday President Biden said it was unacceptable and said it "must stop" and has directed the Department of Justice to prioritize convictions. What sort of animals are out there...weary.

Children and the Border 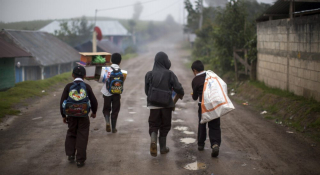 On Saturday President Biden said he would deploy FEMA to care for minors crossing border. What's going on?  Thousands of children, some with but most without, are crossing the U.S. Southern Border. It's the result of repressive economics, politics and a failure of their home country to deal with COVID19. One of my "right wing trolls" delighted in posting (and calling on me to respond) an NBC News story about how Border Patrol, the Health & Human Services Department are struggling to take in these kids and placing them in temporary detention centers. Of course he only reads the headline, which is typical of these folks. Reading seems to be something that escapes them. The reality is that the U.S. is working at a fever pitch to unite these kids with relatives in places like California, Texas, Washington D.C. and other locations. Often paying for flights. But it is complicated. Many family members are here without documentation and the Biden Administration is also confronting issues of social distancing. However the places where the kids are being moved are not the cold stone and wire cages of the  prior administration. The government is setting up tent cities on government land and in those tents are teachers, nurses, social workers, games, and a clean safe place to wait. So...please. (Image: WBUR)

The birthday of our son, Aaron is this week. We, in past years, made our way to the Urban Grill for lunch. Looks like not quite yet. You see, Polk County, Iowa is a Vaccine Desert. People have been traveling long distances from here to get their vaccine. Me? Nothing yet. I'm told that "maybe next week or the week after".

This is also the week that marks the First Day of Spring which is 20 March. That is also the date of my Mother's z"tl death some six years ago at the age of 93 and seven months. I remember it so well....and may her memory be a blessing.

Finally I fully expect to see Polk County Attorney, John Sarcone (D-Polk County, Iowa) to be in a primary if he decides to run for re-election. This is the prosecutor who tried Des Moines Register Reporter who was pepper sprayed and arrested during a demonstration that turned ugly. The reporter, Andrea Sahouri, identified herself as press but that didn't stop Des Moines Police Officer, Luke Wilson from arresting her testifying that she resisted arrest. Wilson failed to activate his body camera and failed to report the incident to his superiors. A violation of department policy. Yet, on flimsy evidence Sarcone pushed ahead and Iowa made, once again, national and news. Yet more embarrassment. Names have already been floating around to primary Sarcone, should he decide to run, who has held that position since 1991.

Gotta go...long post today but hey...I'm trying to make up for some shorter entries.  Thanks for reading and have a great Sunday!