Welcome to Sunday Morning Coffee the political and social stories you may have seen (or missed) all laced with my commentary. It's what

I get to do and thanks for reading.  Let's go!

I see that the City of Miami Beach issued a state of emergency due to the huge number of people crowding the bars and beaches for spring break. What is wrong with people but the better question might be, "Parents, what the hell are you thinking?" The city has had to impose a curfew of 8:00PM and restrict traffic. Some businesses have voluntary closed all in an effort to stop the spread. Now those wonderful young people will travel home and what happens to their friends and family there?  Yeah...but it is "Free-Dumb!".

Not my original thoughts but it fits. When a mass shooting takes place and it involved a Muslim we say it is terrorism. When there is a mass killing and it involves a Black person it is terrorism. When a White person does the killing we say, "He had a bad day..." or other nonsense. We have far to go when we deal with our bias...far.  This was, yet another, tragic event even more disturbing it seems, from accounts I've read, that the Christian Congregation this man belonged to had some very strict teachings that were anti LGBTQ and anti 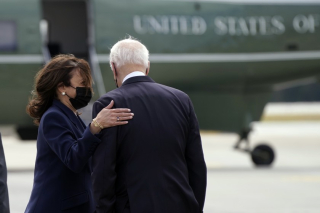 What a difference an election makes. To see both President Biden and Vice President Harris travel to Atlanta to meet with and console Asian Americans there was so...human. There was more than one national news correspondent that teared up while reporting what the president and vice president had to say. Compassion and the White House.  Step back a year. There is no way that would have happened under his watch. No way. (Image: LA Times)

Meanwhile in the U.S. Senate Mitch McConnell (R-KY) is warning about a "scorched earth" policy should the Democrats make the move to kill or alter the filibuster. We remember, Mr. McConnell, how you employed every trick in the book to negate any movement by then President Obama and came right out and said you were doing so to block any attempt of governing by that administration. And now the GOP is at it again. How do you Republicans sleep at night? This nation is hurting. People simply want to live and to vote and to work and to exist and...  Weary.  The filibuster has got to go and be bold Democrats because the Republicans truly are. They don't give a damn.  The Voting Rights Act must pass along with an infrastructure bill that will put people back to work and get our economy back.

Think of the past. If President Franklin Roosevelt had been timid and not taken bold action the nation would not have exited the Great Depression and our country may have been overrun by our enemy. Democrats were elected to fix this mess...fix it!

They Have No Shame

Meanwhile 21 Republican state attorneys general sent a letter to the Treasury Department threating legal action over a provision in the American Rescue Plan that they say infringes on states' rights. Here is the deal. There is a provision in the law that says the states can not issue tax cuts by using the $195 billion of federal money being sent to boost the economy of U.S. states and cities. The GOP, it would seem, would like to take that money and enact any manner of tax cuts where, as you well know, the wealthy would benefit the most.  Now, if states wish to enact a tax cut or a tax increase that is entirely their choice. However using federal funds to do that ain't kosher. Ugh...

Random thought: "Why is Louis DeJoy still the Postmaster General?" OK, I know the answer and while the Biden Administration has much to do you would think they would move on that Postal Commission and fire those loyalists of "45" and fix that mess too.  Weary...

Vlad Is Our Guy!

Last week President Biden, correctly, said that Russian President Vladimir Putin was a killer. Well, he just answered "Yes" to a question as 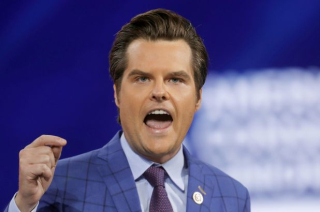 to if the president thought Putin was a killer. Well, he is. Killing or attempting to kill political opponents in Russia is like a national sport. They do that when not working day and night to mess with out democracy and spread disinformation and doubt here in America. And, support the guy that was just defeated.  What do the Republicans do? The chastise President Biden and hold up Putin. You see, Putin challenged President Biden to a debate. (First of all...let that sink in...) Of course that is not going to happen but it didn't stop Rep. Matt Gaetz (R-FL) to deride the president and put his faith in Putin.  Even the eldest son of "45" tweeted, "Putin just challenged Joe Biden to an unscripted debate. The whole world knows that we have no leadership at the top just an empty suit with a teleprompter (and he can't even get that right). They look at Americas weakness now and are salivating." They are such patriots. (Image: New York Post)

Open Up Damn It!

Meanwhile here in Iowa we have beaten back COVID19. We have won! And, I'm really grateful because, try as I might, I can't seem to get the vaccine in Polk County. Like many residents here it looks like I'll have to travel to Rural Iowa to those places that are infested with Pandemic Deniers who are overstocked with vaccine.  BTW this morning the Des Moines Register is reporting that 27% of Iowans will refuse the vaccine if offered. That from the Iowa Poll out this morning.

Governor Kim Reynolds (R-IA) is crowing about the state-wide low positivity rate of 3.6%. Meanwhile places like Dickenson County has a positivity rate of over 13%. Interesting is that in far Northwestern Iowa there are seven counties that have high positivity rates. Hmmm any idea as to why other than it's a GOP stronghold and masks be damned?

The State of Iowa loves to spend your tax dollars on court fees. Make no mistake...it is your tax money. As you know the latest Iowa voter restrictions are being challenged in court. Meanwhile the Iowa Poll finds that a majority of Iowans oppose changes that have shortened the voting period and put roadblocks into voting by mail. But who the hell cares...right? 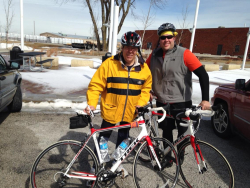 Last Friday was our sons Birthday. Every year, for years, we've met to go out for lunch and take the time to talk about family, business and more. Not this year and that is sad. A bike ride from a couple of years ago and yep...matching bikes.

In just a bit I'm headed north to Mason City. We have a scribe coming from Chicago to inspect our Torah Scrolls at our synagogue there. It's quite the detailed process. You see, a Torah is all written by hand using a special ink and a quill for a pen. If there are letters that are smudged, due to a century of use, it renders that entire scroll non-kosher and can't be used.  I know that, over the years, we've had to retire one or two and now we want to make sure what we have can be used. Yet another adventure!