Welcome back and glad you're here. I've only got about a hour to get this out. My Bride is camping so I get all of the farm chores. Today in

Sunday Morning Coffee there are so many questions and the answers, it would seem, may be the same.  Those damn Republicans. Let's go!

Last week I was on Clubhouse (an amazing platform by the way) for a session of what is called "News, 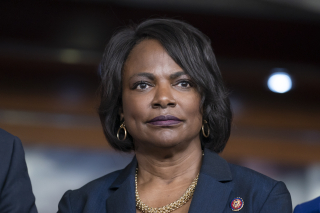 News, News". It's where a couple of hundred people are on the call and the moderator asks for somebody in the room to call out a news headline and then it is discussed for, like, sixty seconds. As you can imagine...it moves pretty fast. One of the headlines was, "Congresswomen Val Demings (D-FL) is said to be eyeing a statewide office." So we launched into the discussion: Would it be against Gov. Ron DeSantis (R-FL) or Sen. Marco Rubio (R-FL)? The pundits on the call leaned toward Rubio citing the current senate makeup and her time in congress. I like that link. Demings has had experience in education and she was the police chief for Orlando before going to congress. And, if you remember she was one of the folks vetted by President Biden to serve as Vice President.  Her tiff a week ago with Rep. Jim Jordan (R-OH) made national news too.  Hmmm.... (Image: US News)

By now y'all know that I was a Biden supporter during the primary. That decision was made based on some personal experiences as well 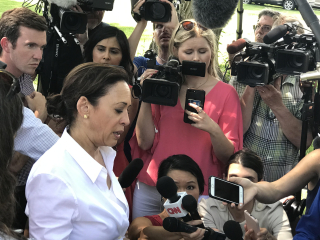 as the urging of my friend, former governor and now Secretary of Agriculture (again) Tom Vilsack. During that primary campaign I went to a number of events that featured then Sen. Kamala Harris (D-CA) and I was so impressed with her raw passion and her ability to connect. So when she was chosen by President Biden to become the Vice President...that was a good thing...for me.  And, it is turning out to be a very good thing for the nation.

It's being reported that as the verdict in the Derek Chauvin was being read that Biden and Harris were together (as they often are) and it has been reported there was a visible sense of relief when the three guilty verdicts came in. Then the president and vice president went to the Oval Office to call the Floyd family. It was then, where Vice President Harris's words of comfort and understanding of the situation, shined like no other Vice President before could have done. She spoke as a person of color who knew, exactly, what the family was feeling and what millions of others face each day. It was a moment.  (Image: 3 July 2019 Media Scrum West Des Moines, Iowa) 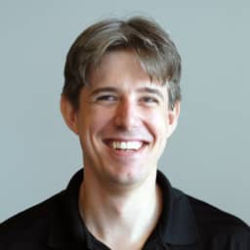 Isn't it odd what is going on in Arizona as the Cyber Ninjas, selected by the Arizona GOP to "audit" the 2020 ballots, do their work. Mind you the Florida company is headed by Doug Logan a supporter of "45" who has repeated all manner of conspiracy theories about the election and was an advocate of the "Stop the Steal" movement. The Arizona Democrats, on Thursday, filed suit to stop the sham and on Friday, Judge Christopher Coury of the Maricopa County Superior Court granted their request for a pause until evidence can be presented at an 11:00 a.m. local time hearing on Monday. (Image: Crunchbase)

Mind you this "audit" has no legal ramifications. Joe Biden still won Arizona. It is being done, I believe, as a test case to see just how far these Republicans can go to make sure your vote is tainted. It's that simple.

Looks like Secretary of State Paul Pate (R-IA) has broken the recent voter suppression law here by marking perhaps thousands of voters "inactive" because they failed to vote in the November 2020 election.  Linn County Auditor Joel Miller found that Pate had been tossing voters from active to inactive when the law that was passed did not consider the 2020 election but elections in the future. I swear these Republicans will do anything to make sure you don't vote.  It's a big story and one that you won't find anywhere other than Bleeding Heartland.  So...read it.

It seems that thousands of Iowans are getting their wish. They don't want to get the vaccine so the state, late last week, informed the Feds that they didn't have to ship some 21,000 doses into the Hawkeye State. Nice. Thank you for being idiots. Thank you for not giving a damn about your fellow citizens. Thank you for making sure our economy tanks.  And, thank you Gov. Kim Reynolds (R-IA) for making this a political football so your base continues to follow you.  Sure, on Thursday she opined to Iowans, "So, what are you waiting for?"  Strong words governor.  You are so...strong.

Sorry this is so short this morning. "Farm Duty" here as my Bride decided to leave town and go...camping. Camping...in a tent. Outside. In the woods. Camping. She said, before leaving on this latest round of pioneering, "So, why don't you go with me?"  Me in a tent in the woods?  Nope ain't gonna do it. As I've said many times before, "My people camped for 40 years in the wilderness. We've had enough of camping thank you very much."  But she is having a great time...so there is that. Meanwhile our granddaughter was here, baked me a 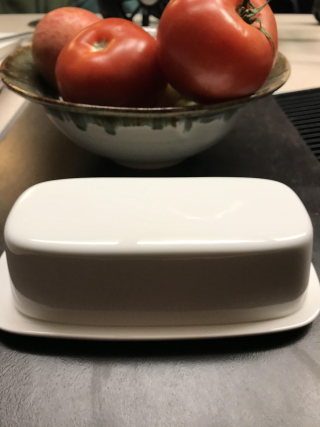 cake and cleaned the Cowboy Room and the Kitchen...spotless. Wondering if "G" might consider staying in the woods for an extended period of time. I've got Jovie.

Finally, did you know you do not have to refrigerate butter? No, really. I had no idea until last week when I read this. To be honest, I should have known. When I was a kid we always had butter on the table in a round dish with a cover (I have searched and searched for that dish here but...no luck...and had to go buy one.) And on the farm, where we made our own butter, we had it sitting out but not as long because it was not pasteurized.  My brother makes bread each week and I put a schmeer on a piece and WOW!  Restaurant quality my friends!  But, remember it's got to be real butter and not margarine.  You are welcome!