Welcome back to Sunday Morning Coffee and to Mother's Day 2021. At least this year Mother's Day seems a bit brighter...but my sense of

relief is tempered by the realization of how many mothers are not with us. A sad reflection of our past year. If you are among those who lost your Mom...I am truly sorry and may her memory be a blessing.

It was a sad day yesterday as well as we learned that the Obama family dog, Bo had died. The former president and First Lady offered their own tributes along with photos on Instagram and Twitter. It was a reminder of the humanity that occupied the White House before terror struck in 2016. 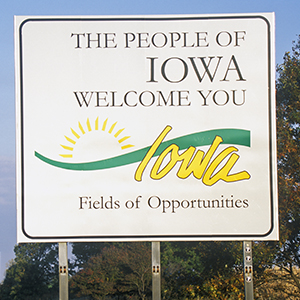 I'm going to submit that as the new state slogan.  Forget about all this happy talk about "Fields of Opportunities" that's old news from Governor Tom Vilsack (D-IA). We now are awash with fear.

Fear is a powerful motivator. We all know that to be true but in Iowa we have fear on steroids. You don't believe me?  Allow me to offer you this list of what some folks in Iowa fear:

I'm sure we have additional fears and Iowa will be able to come up with legislative solutions to deal with them.

Last week Gov. Kim Reynolds (R-IA) surprised even her own party when she announced, on Fox News, that she wanted a Transgender Sports Bill on her desk by the end of the session.  This while every business group in the state is clamoring for more "highly educated and motivated workers".  I was on a press conference conducted by the Interfaith Alliance of Iowa where Keenan Crow from One Iowa spoke about this issue. I invited Keenan for an interview that will air today in the Noon Hour on News/Talk 1540 KXEL.  Here is that conversation and yes, there is a business connection. Click the player to listen.

My brother has been doing some sleuthing into the family tree.  Last week he found an old fountain pen in a box of things long forgotten 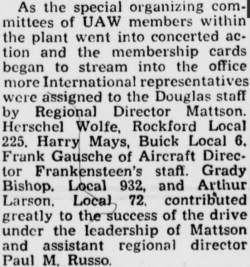 that had inscribed on it our grandfather's name. Our grandfather, it is well known, was an avid union member. In the 1920's he was a member of the Industrial Workers of the World, a pretty radical group of folks with major socialist ties.  He then went on to the Congress of Industrial Organizations as an organizer. That is where the story stopped. Until last week. After digging around he learned, for the first time that our grandfather joined and was elected in 1941 as the president of the United Auto Workers Local 184 based in Racine, Wisconsin. HUH? But there it is in print...and we suspect the fountain pen was a gift from the union because there is more. He is listed in the UAW paper as an "staff" to Richard Frankensteen who then headed up the aviation division of the UAW that had successfully organized the Douglas Aircraft Assembly plant in Chicago.  Here is part of the article from December of 1943. Go ahead and click to read.

Like many other things our family never discussed this. Never. In the 1940 Census my grandfather lists his 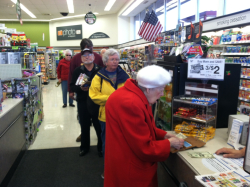 occupation as "Mechanic". What is really odd is that my bet is Frank never turned a wrench in his life. Besides, I'm sure there wasn't room to write "Socialist Union Organizer".  Amazing and I am sure there is more to come as Yoni continues digging. And this clearly gives depth into our own liberal views of the world.

As a final shot, and because it's Mother's Day, an image of our Mother z"l as she visits with the casher at a local Walgreens while digging through her purse for a couple of pennies. Yep, she was "THAT Woman".  You can tell how amused the people standing in line were while she completed her transaction.  Too fun!

Thanks for reading and have a wonderful Sunday and Happy Mother's Day!