And, Good Morning! Grab a cup of Sunday Morning Coffee some of the political and social news you might have seen, or missed, all laced

with my, usual, acerbic commentary. It's what I get to do once a week.  Let's go:

It was a stunning piece of news. Between 1890 and 1969 some 150,000 indigenous children of Canada were forced to attend state-funded Christian schools, the majority of them run by Catholic missionaries. The idea was to subject these kids to indoctrination so they could be assimilated into Canadian society.

Recently ground penetrating radar was used to confirm the remains of 215 children at the Kamloops Residential School in British Columbia...operated by the Catholic church. For its part the Canadian government has admitted that physical and sexual abuse was rampant in the schools with children beaten for speaking their native languages and has made apologies.

Meanwhile Pope Frances, today, said it was "a sad affair" and "This sad discovery increases the awareness of the sorrows and sufferings of the past."  But, no apology for the actions of the church.

So, the U.S. isn't the only nation guilty of such things...  Remember though "Manifest Destany"...so it must be OK. 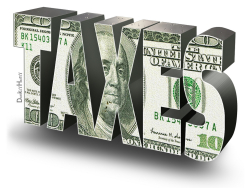 It's a big deal. Last week the G-7 met and agreed to a minimum of a 15% tax on sales and profits by corporations that are selling or located in what has been called "low tax sanctuaries". Those would include many nations in the Caribbean. In Europe the corporate tax rate is all over the board from Hungary at 9% to France at 31%. The goal here is to tax companies such as Facebook and other internet corporations who have managed to set up shop in one location or another to avoid paying up. The proposal now goes to roughly 21 other nations for approval.  The Biden Administration has wanted a higher tax rate but asked that 15% be the minimum. 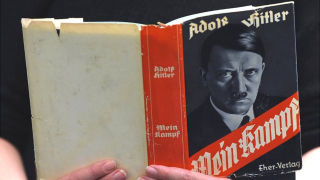 Well that went...well. Former President 45 was back on stage yesterday kicking off a national tour to promote lies. (It's what he does best.) Of course, he continued to spread the "Big Lie" and give himself credit for a whole bunch of stuff that either never happened or was a major failure. Think COVID-19 reaction and "Infrastructure Week".

The amazing thing is that people still fawn over him. Look, this is not only scary but dangerous for our nation. We have seen this playbook before in 1930's Germany where the people who felt they had been given a raw deal fawned over a hateful man with crazy ideas. I suspect the former president has Mein Kampf bookmarked. No, wait...that would assume the man can read. (Image: BBC)

Meanwhile it's pretty nutty in the U.S. Senate as today CBS Sen. Joe Manchin (D-WV) was asked about his stand on bipartisanship. Here is what he said, "I think Senate Republicans want bipartisanship." Host John Dickerson: "Well, they haven’t shown that yet, McConnell says he’s 100% focused on blocking Biden agenda & the GOP restructuring of voting laws state-by-state is..."  Manchin: "Yeah, but I think deep-down they want it."

Denial is a river in Egypt.

The first announced Democrat to run against Sen. Charles Grassley (R-IA), Dave Muhlbauer is making the rounds of Polk County Neighborhood Groups. Muhlbauer, a farmer from Southwest Iowa announced his candidacy last week knows he's got to be out there early and often. An interesting side-note. Grassley who is 87 has served in the U.S. Senate since 1981 which is longer than Dave Muhlbauer has been alive.

So, there is that.

Last week Iowa House Minority Leader Rep. Todd Pritchard (D-Charles City) announced that he was leaving that leadership position following three sessions in the minority. It was rough duty having to go up against the anti-democratic group in the majority. Imagine every day having to face people who are simply not lined up with reality. From health care to taxes to guns to education the Republicans continue to tear down this once great state.  Democrats will choose a new leader on June 14 and I have a suspicion of who that might be but keeping my thoughts quiet until she lets me know she is in the running.  Hint, hint...nudge...nudge. 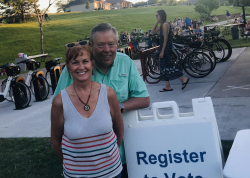 Last week I had the opportunity to hang out with the Clive Democrats and the amazing Lila Starr who chairs that group. She and Hope Johnson, who is running for the Clive City Council, were working the booth during Food Truck Friday sponsored by the Clive Chamber of Commerce.

This is just one of dozens of registration events going on in Polk County each week.  Are we signing folks up?  Sure. But, what is so powerful about this is simply being seen.  Letting folks know in places that had been "ruby red" for a very long time that Democrats are alive and active and working on the issues the vast majority of Iowans believe it and desire.  Change can happen we've just got to stay at it.

My Bride left me on Thursday. Well, it's not really that dramatic. She and some other "ladies" went to Arkansas to go...camping. Arkansas! Camping! I have no idea where she went but it took her nearly 10 hours to get there. Due home sometime later today.  Safe travels.  BTW...for their last day of "camping" one of her new friends had a contact so they spent the final day and night at a resort...with a hot tub and all the finer things of life. No...charge.  Pretty sweet. THAT'S the kind of "camping" I could go for. 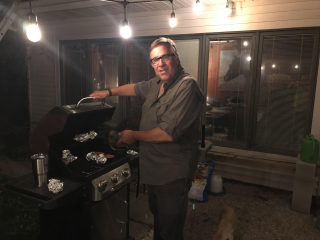 While the cat is away the (very cool) Cats will play. My brother, Yoni, came over last evening and cooked supper. I didn't have to do anything but mix the drinks. He is a wonder in the kitchen. The meal was amazing: Roasted and stuffed Portobello mushrooms, seasoned baked potatoes, stuffed and roasted onions and flank steak that had been pounded very thin, rubbed and marinated for 24 hours.

I gotta tell you...it was delightful.

We then watched a couple of episodes of The Kominsky Method featuring Alan Arkin and Michael Douglas. If you get a chance...watch. It is part comedy and part drama but it is all good. I was turned onto the series by a member of my congregation in Mason City who raved about it and said, "Oy, it is such a reminder of so many of my friends. You have got to see it!" Thanks Peter. One thing to know. If you have some reference to older Jewish men and can appreciate the humor...it is  priceless.

Finally our son, Aaron, was over on Friday afternoon when it was 90 degrees to install a "motion detection security light" on the side of the house. Georgie wanted one and on Monday she and I attempted to put it up but...fail.  I asked Aaron to do it (he is way more handy than I and 30 years younger) and BAM!  Took him about 20 minutes. But, yes, it was hot and yes...it does work.  Thank you!