On a hot and humid morning like this maybe your Sunday Morning Coffee should be...iced?  Hey, thanks for coming back to this weekly bit

of news and opinion post. Always grateful that you take a few minutes to indulge in this effort. Grab a cup and let's go...

I caught a Tweet early this morning regarding the many, many incidents where former president "45" has been accused of sexual impropriety with women and even young girls. I'll admit I've not paid much 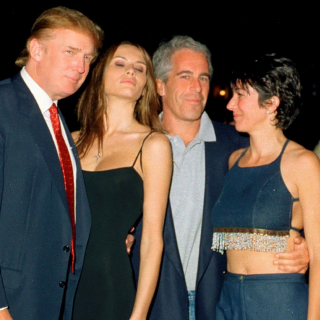 attention to all of this because once the Access Hollywood tape came out and there was zero impact on his candidacy I figured nobody cared. And, that's true. But now the links between he and Epstein and others is back in...well...the "internet news". It's disturbing that all of this buzz is happening. I think it points out how the rich and famous just seem to be able to slip past law enforcement. The "long arm of the law" gets pretty short...it would seem. (Photo - The Guardian)

There are demonstrations going on in Australia, France, Germany and of course here in the United States where people are demanding freedom from mask wearing, from lockdowns and from getting the COVID19 vaccine. Meanwhile there are daily reports about physicians in various parts of the world who report they are heartbroken when, just ahead of intubating a sick patient, the patient begs for the vaccine but the doctor says, "It's too late..."

I've often thought that if COVID19 had first been infecting children rather than older folks that our national response might have been vastly different. But, then again, one can not reason with some people. That and our overwhelming desire to have everything "right now" doesn't mix with the an issue that requires a "long term" fix.  Frustrating...and scary. 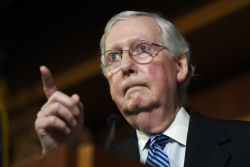 I'm sure that President Biden longs for the "good old days" when Democrats and Republicans could actually sit down and hammer out solutions to problems plaguing our nation. Somebody needs to take a simple message to Joe, "Mr. President, bipartisanship is dead and no matter what you try their is no hope for resuscitation." The GOP does not want certain folks to vote. The GOP cares not one bit about good paying jobs, health care, child care, education or the fiscal welfare of our nation. Last week Sen. Mitch McConnell (R-KY) said so when he started saying that if the Democrats want to raise the "debt ceiling" they are going to have to stop trying to pass legislation to help America prosper.  Voting for the GOP is a fast track to destruction. 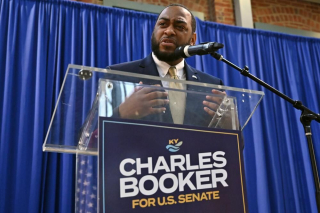 As long as we're visiting about Kentucky you should know about Charles Booker who has just launched his U.S. Senate campaign to kick Sen. Ron Paul (R-KY) to the curb. Booker, a former state legislator, lost a primary to an "establishment Democrat" who then was trounced by McConnell. That has been the reality of Kentucky politics for decades. Democrats, wishing to play it safe, get swept aside because they play "Republican Light". Booker is different. He is coming out of the chute with a full on progressive agenda embracing a social and economic justice message, saying: “We can make freedom mean that every community across Kentucky is thriving with good-paying union jobs. That we’re not just working to struggle less, but that we’re owning, we’re creating, we’re building pathways to wealth all over Kentucky.” I like it! (Photo: WDRB) 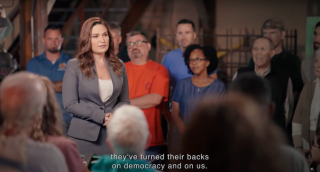 Also launching a serious campaign, this one against Sen. Charles Grassley (R-IA), (Maybe...he has not indicated he is running again.) is former Congresswoman Abby Finkenauer the one-term Democrat that lost to Ashley Hinson as Republicans swept Iowa. Former president "45" won the state by 8%, and Republicans secured three of four House seats. Hinson has since hitched her wagon to "The Big Lie" among other crazy stuff.  But, remember Iowa is now a "deep red" state.  So, how is Abby going to run?  Will she take a page out of the progressive wing of the party or stick to "GOP Light"?  Finkenauer is the second Democrat to enter the race. Former Crawford County Supervisor Dave Muhlbauer announced in May. On the other side, Iowa Sen. Jim Carlin, (R-Sioux City), announced in February that he would seek the GOP nomination for the seat...that ain't going to be successful but he says he's in. (Photo - Video Announcement Still from Bleeding Heartland) 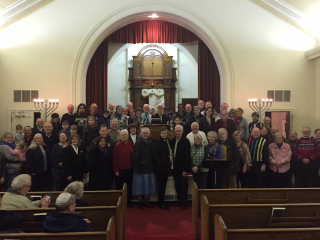 Last week I got to travel to Mason City for my work with Congregation Adas Israel. What was remarkable about this trip was that new people have found us...and they are...hold on...Jewish!  One of the interesting things about Adas Israel is the number of "seekers" who come to services and our Midrash (Study Session). Folks who just want to know more about being Jewish or, perhaps, have some story in their life that might indicate a long dead relative was Jewish or people who have a desire to simply learn. That new people have found us is really a big deal. Now the work to keep them active and engaged continues.  I'm just thrilled and it shows that a bit of social media work...works.  Here is a link to the Adas Israel Blog.

As I was writing this I learned of the death of Carla Offenberger the wife of my dear friend Chuck Offenberger. While it was expected, Carla has been battling cancer for several years, it is still painful. For those who were fortunate enough to know her and for those of who were touched by her writing...she will be missed.  May her memory be a blessing.