About a week ago a steaming, hot cup of Sunday Morning Coffee needed some ice as morning temps were in the high 70's. This morning

we're looking at 58. Welcome to Iowa...right? Stuff is happening and let's do some politics and opinion to help you warm up a bit.

Before the U.S. blundered into our longest war it was the Soviet Union that got their butts beat. We followed into a war that, I believe, we don't much understand. It's sort of like the Vietnam of this generation. With all our technology, with all our advanced ability it's tough to defeat an enemy that has more time than money. While I think pulling out is the right thing the fact that we left so many allies behind and didn't do a proper job in getting them out shows how very little we knew and know about Afghanistan and the Taliban victors.  We knew we were going to get out...we should have, when we had a bigger military presence, gotten those folks out. Welcome to Saigon 2.0. 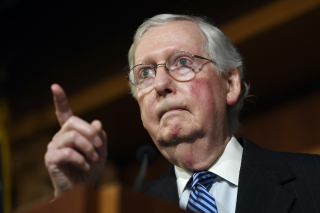 It was a scathing article in The New Republic authored by Mary Trump, niece of "45" who described Sen. Mitch McConnell (R-KY) as, "the most dangerous Republican enabler" of her uncle.

She added even more spice when she wrote that McConnell is "...the greatest traitor to this country since Confederate Army General Robert E. Lee."  The only difference between McConnell and Lee is that the Kentucky Senator is that, "...he has been trying to take our country down from within".

And he is doing it all with...cover: "And yet - whether it was denying Merrick Garland a hearing, pushing through Amy Coney Barrett's confirmation, or ending the filibuster as it applied to Supreme Court nominees but employing it to block legislation that would expand voting rights - his anti-democratic maneuvers have been  performed within the bounds of the system".

Last week many white folks learned that their biggest fear is becoming reality. It is the same fear "45" so well played and continues to play. What might that be? According to the new Census numbers white people are swiftly becoming the minority population as our nation becomes more diverse and it scares the hell out of some. Here you go:

People of color now represent 43% of the population; up from 34% just ten years ago. The non-Hispanic White share of the US population fell to 57% in 2020, shrinking by six percentage points since 2010, the largest decrease of any race or ethnicity. The share of those who identified as Hispanic or Latino or as multiracial grew the most.

Now you know why Gov. Greg Abbott (R-TX) and his puppet Gov. Kim Reynolds (R-IA) are screaming, "Everything that is bad is happening because those brown people are in our country!"  And, white people are afraid and they are fighting back...want proof? 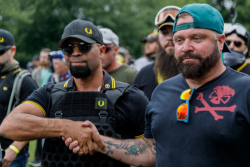 Just hours ago officers of the Los Angeles Police Department stood by as members of the white nationalist Proud Boys beat up on journalists and bystanders at an anti-vax/mask event outside of the LA City Hall. What might have been their response had it been a group of black or brown folks swinging at journalists or bystanders? The dogs and clubs would roll like thunder and there wouldn't have been enough handcuffs to go around.

We already know of several police officers from around the country that took part in the violent insurrection on January 6. Many of those have been fired. However, what a perfect place for white nationalists to hang out...in plain sight.  Some clearly think that "Protect & Serve" is something that ain't equal. (Photo: LA Times)

See You At The Fair! 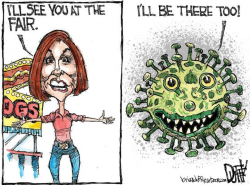 Ugh...another year of missing the Great Iowa State Fair. Nope...ain't going. It's not that I'm not vaccinated against COVID it's just that I don't trust you are. And, while my risk is low I'm too damn busy to be sidelined by even a mild case of Delta...if I were so lucky. So, nope. Enjoy your funnel cakes and corndogs. I'll miss hanging around with friends at Stockman's chasing down a burger with a beer or six. Meanwhile my friend Brian Duffy distributed this cartoon in advance of "fair-time". It fits...and hey, take your chances.

I am constantly amazed at the work my friend Tamyra Harrison does when it comes to Iowan's For D.C. Statehood. While RAGBRAI 2021 is a memory the memory of what she was able to accomplish in just one day is pretty amazing. Tamyra set up a booth along the route and garnered signups from 28 different states, the District of Columbia and even from folks in Europe. What?  She tells me that the excitement of seeing, in the middle of the nation, a group of people supporting statehood for D.C. was, for many overwhelming. Gaining signatures and handing out "51 State Cookies" is a labor of love for Tamyra and I love her for doing this work!  Well done my friend and YOU can help out by heading to that website and signing up. Come on...let's do this!

Ankeny For The Win

Also in the "Let's Do This" department: Andrea Phillips is running for the Iowa House out of Ankeny. Look, this will be a pick-up for the Democrats and a start a rolling back the draconian policies of Reynolds and her lemmings. Not only is Andrea an outstanding candidate she is also living in a community that is trending blue. To get this done we need you to step up. So, as long as you're getting involved with Iowan's for DC Statehood...click here for AndreaForIowa and let's do this as well!  Do it now...the election is September 14.

I gotta go. Promised I'd head to the softball field early today. Then get back to cut some video of a class I'm teaching at NIACC this next month on the Jewish Faith. I'll share that video with you as well. Who knows...it will be virtual and if you want to come along for the class love to have you.

Have a Great Sunday and thanks for reading!