Welcome to 2022...which seems a bunch like 2021 so far. It's Sunday Morning Coffee back in the saddle after a couple of weeks off. To

tell the truth, the political news is so weird that I had to "duck and cover" for several Sundays. NOT that it's gotten any better...right. So, let's get into some opinion, politics and a dash of religion just to keep things interesting. 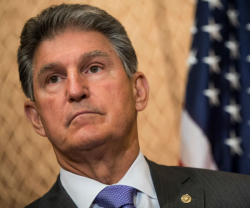 In December President Biden signed the $770 billion defense bill which was $20 billion more than the pentagon requested. It struck me that while we can't get our crap together to support a host of domestic issues say like...voting...what exactly are we defending? Without the right to vote and hold politicians accountable and move this nation to a "more perfect union" what the hell are we doing?  Nearly two dozen states have passed voter suppression legislation (I live in one) and people like Sen. Joe Manchin (D-WV) and Sen. Kyrsten Sinema (D-AZ) have just said "No!" to carving out a filibuster change to get voting rights passed. So there is that...

comes to COVID-19. We live in a nation that has a patchwork health care system, that leaves the states to figure out what to do because we have failed to have a clear national response to this plague. To make matters worse it seems that the people in charge alter their recommendations on a regular basis. For example now the CDC says a cloth mask isn't enough and that people should wear a "surgical mask" and also a cloth mask over that.

Meanwhile one in five Americans have yet to get their first shot of a vaccine. All of this is tragic and it extends the life of this awful 21st Century Plague. 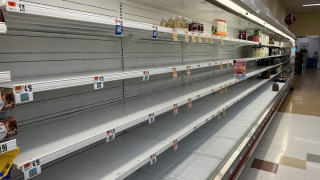 Last week I saw a political pundit post a photo of some empty grocery store shelves and take it with, #EmptyShelvesBiden. Weary. Want to know why some shelves are empty? Let's start with COVID-19 taking hundreds of thousands of "essential workers" out of the workforce. National economists say that although a precise count of the number of employees who are out sick or quarantining is hard to come by, about 5 million Americans could be isolating due to COVID-19.

Meanwhile we are more than 80,000 truck drivers short of full employment. That means only two of every sixteen loads are being claimed. And there is the Supreme Court decision that vaccine mandates  are not legal and that OSHA overstepped in that call to have employers of 100 people or more get their staff vaccinated. Then there is Matt Whitaker (who we in Iowa know only too well) the former Acting U.S. Attorney General and rabid supporter of "45", in a tweet, said the decision was a "big win for federalism". Oh...please. (Photo: CNN)

And you wanna know why I needed a couple of weeks off?

Well now Gov. Kim Reynolds (R-IA) in yet another gift to the wealthy (who, by the way really make the rules) has just proposed a graduated Flat Tax System for this state. The proposal would get to a flat tax of 4% in several years. This has long been a goal of the rich and powerful as it would shift a larger tax burden to lower income individuals and Lord knows we don't need them to bog down progress.

In addition to gifting to the wealthy this would also, according to economists, lower state revenues which then allows the state to further restrict public education support. "Hey, look at our revenues. We can not continue to support public education in any meaningful way..." I can hear it now.

And in another lofty proposal Gov. Kim Reynolds (R-IA) has also called for reducing unemployment benefits to force people back to work. Like they are lazy folks sucking down bon-bons while watching day-time soap operas. I'm not sure where this woman dreams up this stuff. This sort of hard-hearted response to a plague is typical of her and her minions. It's just...awful.

Meanwhile on the opening day of the Iowa Legislature the State Senate President Jake Chapman (R-Adel) used his time to call out teachers and journalists for having a "sinister agenda" that is threating the safety of children. You know, the kind of rhetoric that resulted 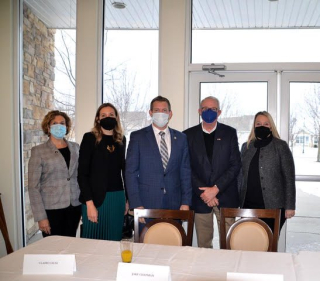 in a guy shooting up a pizza joint because he was convinced there was "child trafficking" going on there.

Well, Jake, I got news. Enjoy the limelight because your time in the Iowa Legislature will soon be coming to an end.

Exhibit A: Here is a recent photo of legislators taken at a West Side Chamber of Commerce Legislative Breakfast this past week. It was not that long ago that every legislator representing the suburbs of Des Moines where Republicans. Voters have finally come to the conclusion that those representing them were doing a lousy job and kicked the GOP to the curb. Legislating from a point of fear only goes so long. There is not a boogie man behind every tree and bush. While that playbook has worked in the past...the rational is getting mighty thin.  So, Jake get ready for a more quiet retirement as Sen. Sarah Trone-Garriott takes you on in your home turf. Know that thousands of us are working to that goal.  In the photo: Sen. Claire Celsi (D-WDM),  Sen. Sarah Trone-Garriott (D-Windsor Heights), Sen. Jake Chapman (R-Adel), Rep. Kenan Judge (D-Waukee) and Rep. Jennifer Konfrst (D-Windsor Heights). (Photo - Windsor Heights Chamber)

It was a reminder of what once was. This past week I attended a luncheon put on by Iowans Supporting Israel a true bipartisan

organization that seeks to strengthen ties between the two entities. It was a bit surreal as I sat next to the chair of the Grassley reelection committee and Attorney General Tom Miller (D-IA) and a host of people from both sides of the aisle who hold drastically different political beliefs all coming together in support of the State of Israel. The topic was the BDS Movement which seeks to Boycott, Disinvest and Sanction Israel saying that the nation's treatment of the Arab population is akin to apartheid in South Africa. The speaker was Jacob Millner from the Minneapolis office of the American Jewish Committee who shared the reality of the situation in Israel vs. what life was like in South Africa and other places that oppress minorities.  Thirty-three states, and Iowa is one of them, have passed anti BDS legislation that restricts investment in companies that support BDS. If you really want the full story...feel free to make contact with me.

We had to cancel services at my congregation Adas Israel of Mason City. Snow. But, if you want a peek at what we talk about each week in our Torah Study you can visit our Adas Israel Blog Post which looks a bunch like this blog posts...for obvious reasons. Yes, each week I get to do that...too.

It's will be my first City Council Meeting as a councilor. The Windsor Heights City Council meets on the first and third Monday. However because of the New Year Holiday we did not meet on January 3rd and we'll not meet tomorrow the 17th because of Dr. Martin Luther King 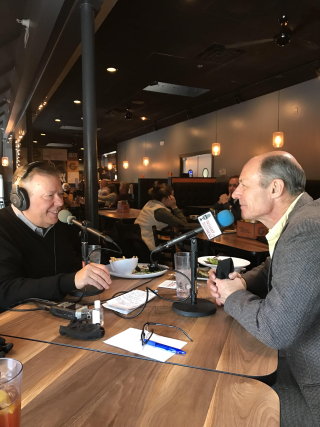 I'll be taking Insight on Business the News Hour on the road this week. Headed to Kansas City on business. Be looking for a long-form conversation over lunch with U.S. Senate Candidate Admiral Mike Franken. It was the return to my "Out to Lunch" segment that's been on hold during the pandemic. My thanks to managing partner Karl Wertzberger and his staff at Gilroy's Kitchen + Pub + Patio for hosting us.

Finally.....YES Mitch Henry I will be sending in my dues for the Iowa Unity Coalition...honest!

Yikes this got long!  Thanks for reading and have a great Sunday...