He said what is on the minds of nearly everyone. Welcome to Sunday Morning Coffee where it's always news, politics, opinion and

sometimes a dash of religion just to keep it interesting. As always, should you have a comment go ahead and launch in the comment section. Ready? Let's go!

Yesterday, in Warsaw, following a speech about unity and support for Ukraine and NATO President Biden 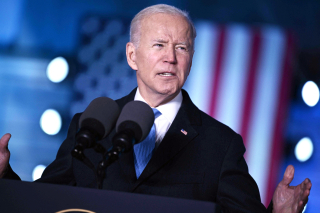 added nine, unscripted words to his address saying, "For God's sake, this man cannot remain in power". Of course the talking heads went into overdrive with the left stumbling over themselves saying he didn't mean anything like "regime change" and the right chanting in unison that the president has lost his mind and should not be the president.

But...Biden said exactly what you have been thinking for weeks as you watch the carnage rain down on the people of Ukraine by the war criminal Vladimir Putin. The Russian army has been targeting civilians since the war began and all of it at the direction of the dictator Putin. I've been fortunate enough to have visited with Joe Biden many times over the years, mostly on a personal level, and those nine words came from the heart of a man who speaks truth...and you know it and you know he is right. (Photo NBC News)

Back in 2013 leading members of the Iowa Democratic Party and the Iowa Republican Party created the non-partisan group known as Iowans Supporting Israel (ISI). Over the years I've been to several of the lunches that have featured some high-powered political and thought leaders all dedicated to supporting the only democratically elected government in the Middle East and long time ally of the United 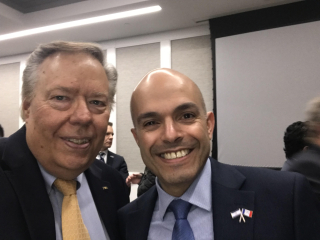 States. This past week ISI held what they hope to be an annual gala and honored two of the founders of the organization: The late Ed Skinner and Bud Hockenberg. It was standing room only in the Prairie Meadows Ballroom as people from many faiths and political persuasions came to celebrate and to listen to the keynote speaker, Yinam Cohen Consul General of Israel to the Midwest. (Photo) It was quite the mix. I had the opportunity to visit with former Governor and Ambassador to China Terry Branstad about being back in Iowa and his family...if that gives you a taste of what this was like. Of course Sen. Charles Grassley (R-IA) was there as was Attorney General Tom Miller (D-IA), State Treasurer Michael Fitzgerald (D-IA). It was an impressive list.  So, why am I sharing this with you?

Coming up there will be a luncheon featuring all four members of congress, Cindy Axne (D-IA), Randy Feenstra (R-IA), Ashley Hinson (R-IA) and Marinnette Miller-Meeks (R-IA) discussing issues that surround Israel and Iowa. If you are so moved you might consider becoming a member. It really is an interesting and enlightening group. 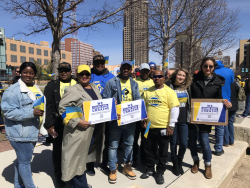 On Saturday there was a march to the statehouse, a presentation of a check and speeches in support of Ukraine.  There was also a call to end the war and urge the governor and the legislature to do more and welcome refugees and take a stand against the Russian aggression. This too was quite a mix of people. Former refugees from Liberia and Ukraine were there. Jews, Christians and Muslims attended and spoke.  And there was a check presentation of $2,500, a down payment on $10,000 pledged by a West Des Moines group known as Coffee FC made up, mostly, of Liberians. My good friend Rep. Ako Abdul-Samad (D-DSM) fired up the crowd with his pledge of support for both peace and power, "Because when the people 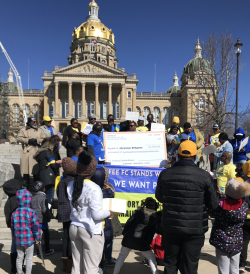 have power we can push for peace!" There is so much going on....

A quick observation: I have the sense that the war in Ukraine may, in some way, galvanize our nation and cause us to unify this divided nation.  We can do so much more...together.

Meanwhile some students from Waukee and Des Moines Roosevelt are raising funds for Ukraine Relief. My friend Mike Draper and his crew at Raygun are selling t-shirts at cost with the profits going to these young people.  You can get yours here.

Just half-a-cup of Sunday Morning Coffee today...sorry.  There are rumblings that the Windsor Heights Chamber of Commerce will no longer exist but be rolled into the Clive Chamber of Commerce. If that happens I fear my business community will suffer.  The Windsor Heights Chamber was founded back in 2004. Long time member and original founder of the Chamber, Kris Gregersen will tell you it was about, “having a seat at the table of the local government”.  The city had recently been “improving” University Avenue and some in the business community were concerned that there was a lack of representation.

Over the years the Windsor Heights Chamber has had a hand in many important aspects of our community. From fun adventures to working with our business members with our Shop Small Campaign to the serious work of spearheading the drive to, again, reconstruct University Avenue into the great showplace it is today to spending time and money to support the Local Option Sales Tax effort which passed by a wide margin.

When the next major effort comes about to improve Windsor Heights and our business community will the Clive Chamber show as much passion?

I've sent a letter to each member of the Windsor Heights Chamber asking them to reconsider and work with me to reignite this group. I hope they listen.  If you know of a local influencer I hope you'll reach out.