Sunday Morning Coffee is all about politics, religion, pop culture all laced with my

opinion.  My name is Michael P. Libbie and if you want to leave a comment here, feel free.  But, no hiding kids...if you say it, claim it.  Or we can connect on my personal Twitter Stream @MichaelLibbie or my personal Facebook Page is right here. OK...enough of the commercial, let's get some coffee! 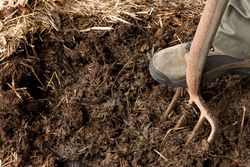 What a difference a week makes.  Vice President Joe Biden faced the young congressman from Wisconsin and won the debate and the day for the Obama - Biden ticket.  It was vintage Joe.  While Mr. Ryan attempted to go toe to toe with the Vice President it was no contest.  OK, so I'm a partisan hack and I know Joe Biden from his many visits to Iowa...many visits...but his performance rocked.  And, you know...his word "malarkey" was spot on however I suspect he really wanted to say "Bull-S*it"...and sort of wish he had.

I'm trying to figure this out.  Some of my media friends who supply services to some of my political friends demand candidates "go negative" in their print, radio and TV pieces. Why?  "Because negative works!"  I'm not so sure.  In my business life my job is to read consumer trends and response.  We do it for everything from packaging to social media.  When we're "selling" a bar of soap to consumers we don't spend our time on why the competition is...lousy.  Rather it's all about benefits and rewards the consumer gets.  My thought is that negative only cements the base and does little to encourage those who are "undecided".  But, hey...I could be wrong.  What do you think?

Speaking of the Undecided

Several of us were talking about this the other day and wondering, out loud, where in the world the pollsters are finding "undecided voters".  Seriously?  How in the

name of everything holy, and at this point, can somebody be "undecided"?  My Mom often can't decide on what to have for dinner but even she is rock solid on this election.  If you know of somebody who says they are "undecided" make sure you keep their name for future reference...especially if you are selling something.  It should be an easy sale if it's vanilla ice cream.

They Can't Help Themselves 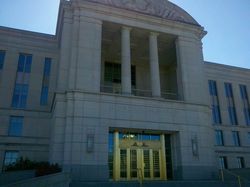 Plenty of folks from outside Iowa want Iowans to remove Iowa Supreme Court Justice David Wiggins.  They have cooked up all sorts of convoluted stories to convince you and I that, "the justices legislated from the bench".  Hogwash.  Here is what the Court wrote:  "Our responsibility, however, is to protect constitutional rights of individuals from legislative enactments that have denied those rights, even when the rights have not yet been broadly accepted, were at one time unimagined, or challenge a deeply ingrained practice or law viewed to be impervious to the passage of time."  You might think that being gay is...icky...that's fine. Nobody is asking you to become anything you are not.  This is about equal protection not about "eroding traditional marriage".  I guess if you want to move Iowa backward and enact legislation that would legalize discrimination have at it. But, I've got to ask you...what group is next in your sights?  Retain Justice Wiggins.

Speaking of the Iowa Supreme Court

Also last week the Adams for Senate campaign received a call from Beau Fodor who is known for his company Panache and his involvement in the LGBT community. Beau offered to do a meet and greet for Desmund Adams who is running for the Iowa State Senate.  We headed to the Supreme Court Building where an officer informed us we could not shoot video too close to the building.  He was nice about it saying, "The Court does not want to appear political in any way."  We weren't going to but can appreciate the concern.  Here's the video:

The event takes place at the Embassy Club - West in West Des Moines on November 2nd.  We'll keep you informed.

This morning in the Sunday Des Moines Register there is a brilliant series of articles about the children of Iowa and the "unprecedented challenges" they face.  Written by our friends Donnelle Eller and Mary Stegmeir it is a shocking look at education, poverty, single parent families...and the trends.  It's much more than a "report" says Rick Green, VP and Editor of the Des Moines Register, "It is a year long call to action." This is powerful stuff...jump online or go buy a paper.

This Should Sway You...

For those of you on the political fence...Wisconsin Governor Scott Walker is coming to Iowa to stump for Governor Mitt Romney.  He'll be in Cedar Rapids on Tuesday just ahead of the next debate.  Makes you feel all cuddly huh?

Last week I learned something about...me.  Seems the Republicans don't care for me...much.  I had no idea until I read a post in the West Des Moines Patch which said, (Michael Libbie), "...a truly far left partisan who writes some pretty loony (often with flawed logic) and blog posts full of vitriol rants.."  Thank you and I suspect my grandfather Frank, a union organizer in the 1930's would be proud and if you could just string an entire sentence together that would be even...cooler.

Partly Personal Two: We took in Farm Crawl 2012 last Sunday.  Here is just one of the videos, this from Blue Gate Farm one of the eight farms that took part.  And, yes...there is...BEER!

Have a wonderful Sunday! - Michael

politics, sex, gossip with a little fun thrown in for...balance.   We'll get back to business tomorrow.  As always, if you would like to respond, feel free to leave a comment here or on Twitter it's @MichaelLibbie and my personal Facebook Page is right here.  My name is Michael P. Libbie and (yep) I wrote this. Alrighty then...grab a cup and let's go:

Sorry for being so crude however that seems to be the normal state of dialogue these days.  Last week I posted what regular folks, who are tired of the hate speech, might do, on a local level, regarding "El-Rushbo" and his tirade against women.  (And other assorted groups) I had also posted an ABC News story which

spoke to the number of advertisers "El-Rushbo" had lost due to his behavior. Not long after two individuals I know took me to task as being "disingenuous" and, when that didn't rile me, one shared with followers that, "If you are a conservative and doing business with this man you should re-think your relationship".  In other words, if you agree that it's OK for a national talk show host to use gutter language to describe someone and then request "sex tapes" of her activity you should not do business with our company.  (I think, maybe, he has a point.)  My being "disingenuous" was the fact that I failed to call out comedian Bill Mahar when he said,"Sarah Palin is a stupid c**t."  Fact is...I didn't know and, had I heard, I would have urged people to write letters to his sponsors.  Except he doesn't have any.  The Internet and Social Media is an amazing place but these tools, in the hands of unbalanced people, is also a troubling reality.  It is sad...truly.

What Is Driving the Anger? 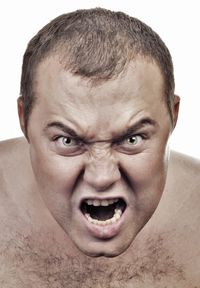 There are an ever increasing bunch of angry people among my conservative friends. There is always a "War on America!" and "Christianity is Being Attacked!" and "The sky is falling!".  I was wondering about that and believe it's driven by two things: 1) The reality is sinking in that the electorate has looked at "their guys" and decided their choice is "none of the above" and 2) They realize that President Obama, even for all the false information they spew, will be re-elected this fall and the thought of this is driving them crazy(er).  It was bad enough that a person with an odd name, who happens to be black, was elected as the President of the United States (once) but to have it happen again is more than they can stomach.

The call, I had been expecting for months, came this past week from my new 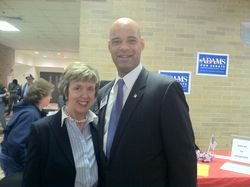 friend Susan "This Ain't My First Rodeo" Judkins sharing with me she had decided to run for the Iowa House against Chris "Ain't Got No Newsletter for You!" Hagenow (R-Windsor Heights).  I welcome that decision.  During the discussion Susan shared this story:  "I'm a moderate but I want you to know what that means.  In 2003 I served on the Central Committee of the Warren County Republicans.  Two things happened that year that caused me to re-think my values:  1)  We were being asked to support wars that we could not pay for, that troubled my fiscal conservative nature and 2)  We were told, based on a plank, that anyone who was pro-choice was not a Republican.  I realized that it was the party which left me and I regestered as a Democrat."  Game on...Chris.  (Photo:  Susan Judkins with Desmund Adams at the Polk County Democratic Convention.)

Enjoyed this look at Templeton, Iowa and all that means to the bootlegging trade.  It's a piece by Kyle Munson for the Des Moines Register and it's loaded with some history and a look at the secret world that still goes on down the gravel roads around this community of fewer than 400 folks.  Enjoy...but  come back?  (Oh, and check the movie trailer from director Kristian Day...)

Later today, I believe, we'll post a quick video about my Bride's "G-Spot".  Georgie has been working on her "craft room" for...weeks and weeks.  She'll give you a tour.  I think that is the plan. 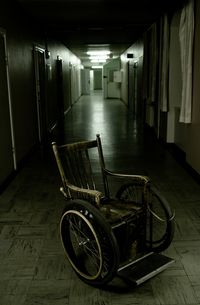 A couple of surprising statistics:  Iowa has more suicides than homicides and the numbers are growing.  Iowa tends to favor punishment vs. treatment when it comes to crimes linked to mental health issues.  Iowa ranks 47th in the nation for the number of psychiatrists.  180,000 people in Iowa have a serious mental illness.  Shocking stuff huh?  This coming Tuesday there will be a community mental health forum held at Walnut Creek United Methodist Church, 12321 Hickman in Urbandale.  On hand will be State Senator Jack Hatch, Orchard Place CEO Brock Wolff and Teresa Bomhoff, chair of the Iowa Mental Health Planning Council.  Desmund Adams, who drove the discussion to hold the forum, and sits on the Board of Mercy College of Health Sciences will serve as the moderator.  The meeting starts at 6:00PM and the public is invited and encouraged to attend.

That's it...and it's FINALLY LIGHT OUTSIDE!!!   Where did that hour go?  Thanks for coming by.  Have a fantastic Sunday! - Michael