Sunday Morning Coffee is my regular post about politics, religion and

news with some gossip (and my opinion) sprinkled throughout.  If you want to leave a comment here, feel free or let's connect on my personal Twitter Stream @MichaelLibbie and/or my personal Facebook Page which is right here.  Lots of stuff going on this week, let's get started!

They want it so bad.  Some way, before the 2016 Presidential Cycle, to derail the Hillary Express.  Hated, almost as much as President Obama, Hillary Clinton is everything the Republicans dislike.  A strong, capable, bright, effective and hard-nosed woman who just happens to be educated.  So congressmen like Jason Chaffetz (R-Utah) keep digging in the hope they will find something that leads to destroying Mrs. Clinton.  Trouble is...there is...nothing.  No matter how hard the right-wing "ditto-heads" keep up the drumming it ain't happening and that, more than anything, is driving them nuts.  It's a short drive.

Hey, where are you?  You folks who have been berating President Obama, the Obama Administration and the Democrats...you've become silent on the deficit.  Could it be that's because we are climbing out of this hole faster than predicted?  Home prices are rebounding (here in Des Moines, Iowa up $10,050 in April alone), the stock market is hitting all time highs (last week it topped 15,000) and Fannie Mae said it would pay the government $59.4 billion in dividends. Those same "doom & gloom" politicians need to switch gears and find some other political catastrophe (see above) or maybe just focus more on fear...you know black people, immigrants, brown people, welfare queens...the usual list of suspects.

The establishment did not want her to become a United States Senator and now that she's there Sen.Elizabeth Warren (D-Mass) continues to shake up the status quo. Last week she submitted her first bill.  It was simple and direct: "Offer students in the United States the same sweet deal regarding interest rates that the banks get."  Currently banks borrow money at the record low interest rates of 0.75%.  However, if a student borrows money he/she pays 3.4% which, unless congress changes the rules, will double on July 1 to 6.8%.  All of this going on as colleges continue to raise tuition and students graduate with record debt; doubling from $10,649 to $20,326 in just ten years.  Sen. Warren has the kind of family values that make sense.  And then there is...this:

All You Need is Jesus

I see the governor had surgery to lose some weight.  That's a good thing...seeing less of Gov. Christie is always positive.

Sen.Rand Paul (R-KY) was in town last week and the Iowa GOP is swooning. "He is just the right person to get this country back."  "He believes in freedom and I believe in freedom and he is the right person for the job."  Yawn. We've seen this circus before.  Sen. Paul will be the one of dozens who will seek the GOP Nomination...dozens. I wonder what Sen. Paul, who believes in less government and more freedom for private companies, might say about...this:

Last week Gov. Terry Branstad (R-IA) was giddy as he announced a major expansion of $1.8 billion worth of wind energy turbines coming to Iowa.  Giddy. Of course MidAmerican Energy isn't doing this...alone.  They are received federal tax credits in the millions and those federal tax credits will allow them to save cash and invest in...wind energy.  Wind energy; you might remember former Gov. Mitt Romney, who was so warmly embraced by the Des Moines Register and...Gov. Branstad (see we don't forget) was against...wind energy.  Meanwhile Gov. Branstad, who does not trust the federal government to assist Iowans with health care, doesn't seem to mind that less federal dollars collected is not a problem.  Giddy.  Meanwhile, and they say this is not connected, MidAmerican Energy is requesting a rate hike.  They will get it...after all you can't spurn your...lover.

So, How is that Water? 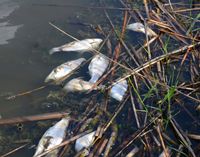 What we need is voluntary conservation practices in agriculture.  Leave it up to the farmer to control how and what he/she does with their land and the water under the land.  Uhm...OK.  Last week the Des Moines Register saved this headline for Section B, "Water Pollution - Nitrates in rivers hit record levels".  Seems that the city has tried to measure the amount of nitrates (from field runoff) but their equipment won't register amounts as as high as they are seeing...so they are guessing.  To keep the water "safe" they have turned on "nitrate removal plants" costing the department $7,000 a day. (We really need to get government out of water treatment huh?)  Meanwhile Sec. of Agriculture Bill Northey (R-IA) and the GOP committee on farming, the Iowa Farm Bureau, say, "We can't control nitrates from farming operations because we can't control the weather."  Damn you Mother Nature!  If it were not for YOU we would have safe drinking water....  I know, that's a tough indictment on Mother's Day.

Sometimes It's Good To Get...Fired

Giddy?  Last week two former executives were awarded big dollars when they were...fired.  No, these executives were not part of some insurance company, manufacturing company or hedge fund...they were employees of a non-profit and a school district.  Former Iowa Public Radio (IPR) CEO Mary Grace Harrington will receive a settlement of $197,000 for "emotional distress" and a deal that she will not sue.  IPR is about a million dollars short of their $8 million goal in fund-raising.  Meanwhile in the tiny hamlet of West Des Moines the school board decided, on a 7 - 0 vote, to fire District Superintendent Peter Ansingh.  He'll get paid his annual salary of $200,000 through June 30, plus vacation pay plus a lump sum of $225,000.  It is good to be the king...even when dethroned.

This week, in Des Moines, Iowa, the price of unleaded fuel climbed to $3.49 a gallon.  That's up twenty-cents in less than two weeks. The next time you have to decide between gas or groceries you might think of two things:  1) Wish you had been an executive for a school district or a non-profit or 2) Be grateful for the obscene amounts of cash the government throws at the oil companies because it is helping you feed your family.  Life is good...no? 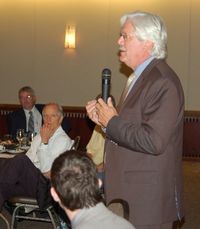 Months ago I shared this with you and last week Iowa State Senator Jack Hatch (D-Des Moines) took the first step in an effort to become governor. I know Sen. Hatch, he is a well qualified leader and passionate about making a difference in the lives of Iowans.  So, before you folks in Eastern Iowa say, "Jack who?"  You might want to get to know this champion of regular Iowans.  Of course Gov. Branstad (R-Iowa) used to news to try to raise some cash to fight off the Democrat challenge..."please send me $3 or more" said the email.  Now at issue is, of course, US Secretary of Agriculture and former governor Tom Vilsack (D-IA).  He recently purchased a home here and speculation is he'll run in 2014.  I dunno...we'll see.  But, if Sen. Hatch runs Gov. Branstad may decide not to run and hand over the keys to Terrace Hill to Lt. Gov. Kim Reynolds.  If Sec. Vilsack runs Gov. Branstad will stay in.  Me thinks. What ever way this goes it will be...fun.

I took in the Downtown Farmer's Market yesterday.  Rode my bike the

ten miles into the heart of Des Moines and mingled with thousands of Saturday Shoppers.  Fun times. That is where I met Mary and her son  Mike from Milwaukee, WI.  Mary is an avid reader of Sunday Morning Coffee and I get to thank her daughter Susan and son-in-law Jeremy for passing along my work.  Gosh...Mary you say the nicest things but could you do me a favor and replace Gov. Walker.  It would be the right thing to do. (Photo L to R: Susan, Mary, Mike, Jeremy)

It's "The Holy Day of May"...Mother's Day and rightly so.  We get to celebrate with my Mom today.  She'll be, G-d willing, 93 in June and while she often drives me nuts, "You're shrinking." or "You need to eat more." or "You're getting a little pudgy!" I value our daily visits because she is...my Mom.  Today we'll gather at our home for a cookout and share more stories.  She'll swoon over two of her six great-grandchildren and we will, in good nature, make fun of her witness to creating "the wheel" and being on a first name basis with Moses.  I would not trade it for the world.

To Mom, my Bride and to all of you Mothers...may your day be blessed.

Thanks for coming by...enjoy your Sunday. - Michael