Sunday Morning Coffee is news, opinion and observations  It's politics, religion and

stories that will make you...crazy(er).  All week long stuff goes on that makes ya want to go, "Huh?" and we talk about it here.  So, grab a cup and let's visit for a bit.  Well, maybe two cups...it's been a weird week.

Just about the time when you think nothing could be nutter than giving Michele Bachman the win in the Iowa Straw Poll...the folks from the Iowa Corn Promotion Board (key word: "promotion") show up with a new Cy-Hawk Trophy. 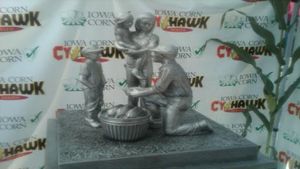 The "work of art" is a disaster among football fans for an obvious reason:  It says NOTHING about...football.  But, the folks at the Corn Promotion Board, Iowa Corn Growers and Learfield Sports don't much care because it screams...corn.  Corn, that's what those young men who come from the cities and villages of America think when they go out and get battered and brused for sixty minutes of Big Ten (12 schools) or Big Twelve (9 schools) football.  Two of my favorite comments were:  "It looks like they picked it out at an Isabel Bloom store." and, "Maybe they should give it to the loser.".   Even Iowa's former (and great) coach Hayden Fry said, "It makes me chuckle."  It makes us look like...idiots.  Oh wait...there was that Bachmann win...

(Clive, Iowa)  Today the Pork Producers announced the new look for the Floyd of Rosedale Trophy which has been given to the winner of the Iowa/ Minnesota football game since 1935.  The new trophy features a stylized hog confinement building modeled after those sprinkled across both states.  "It's a work of art!," said Orvile Rubwacker the Director of Public Relations for the Pork Producers.  "We put two or three days into this and did tons of talking and fund raising with our partners over at Stright Seam Hog Confinement Buildings, No Stink Slurry Contractors and Cholera Cutter Pharmcuticals."  Rubwacker went on to say that 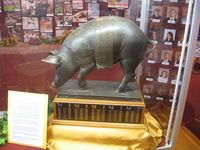 the look of the "old" Floyd of Rosedale Trophy was just "outdated". "Why we ain't had hogs look that way for fifty years.  Time to get with it!"  Rubwacker denied rumors that the turf at Minnesota's TCF Bank Stadium was going to be named, CAFO Field.

On To Less Serious Business:

If your memory goes back to April the names Shelly Huss and Childtime Learning Center might ring a bell.  Shelly was the twenty-year employee who was fired by the out of state corporate child care company when Childtine learned that she had

extended some kindness to a family who was devistated by the deaths of two children in an automobile accident.  There was an outpouring of anger toward Childtime that was to have led to a protest outside of their Ankeny location.  However, it was Shelly Huss that asked supporters to not show up.  That's the back story.  The new story is that Ms. Huss has opened up a child care facility...in Ankeny.  Creative Kids Learning Center opened last month and, from all reports, is doing well.  What a great idea and we wish Shelly all the best.  I wonder if the folks at the "other out of state" center...noticed?  Thanks to my friend Steve SchraderBachar for the heads up.

Just when you thought it was safe...  When Governor Rick Perry (from the "enlightened" state of Texas) announced his intention to run for President loads of 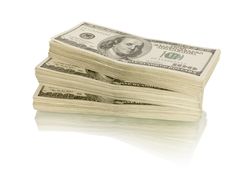 people climbed on.  Mostly because he didn't "seem" as odd as the rest of the front runners in the GOP (Bachmann, Paul...the list seems endless).  However the nation is now getting some of the same kooky talk from this guy as we are the rest of the pack.  Recently, Governor Perry took on the Federal Reserve and said the "printing of money was treason".  Uhm...no it's not.  But, why take my word for it...here is something from my conservative friend Ben Stein who offers Governor Perry a lesson in economics.

Last Day of "The Fair" 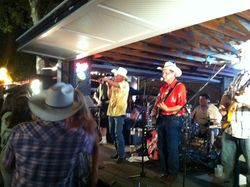 Today is the final day of the eleven day Iowa State Fair.  The weather has been fantastic and so have the crowds.  I was there (again) last night visiting with old friends about our families and lives and our great state.  I can't for the life of me figure out why some people loath the fair and vow to never set foot on the grounds.  Sure there are some odd folks running around the grounds...no wait that was last week before the Iowa Straw Poll...but bet there are some odd folks at your grocery store too.  It's a wonderful event and we'll be back again today to put a cap on it.

at Dowling.  It was also seen...world-wide.  My friend Peter Tarpey, and a host of others, wrangled up sponsors and a fine group of professional broadcasters and aired or webcasted the game.  I wasn't able to see it because I was driving to Mason City for services.  But from all reports, and we asked several folks, it was a success.  The back story is that Peter has been wanting to do something like this for years....congrats!

Started with a football story and ended with one.  Seems like it's time to get this out.  Thanks for coming by and if you wish to leave a comment, you can do that here or on Twitter @MichaelLibbie or my personal Facebook Page is right here.  Have a fantastic Sunday! - Michael