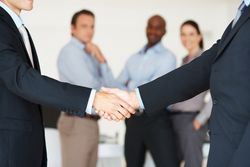 video project we completed.  Why am I sharing?  Because the call was a "value added conversation" on how to best use the video and collateral ideas to increase it's impact.

It's called adding value to the relationship.

There are lots of advertising agencies that will stand in line to service your advertising/marketing needs but, long ago, we figured out bringing value into the conversation tends to set us apart.

How can you bring value to your customers/clients?  Here's a short list.  If you think about it, I'll bet you can add more.

We're not just sharing advertising agency stuff here.  This list and your additions will work for just about any discipline.  Bring value to the relationship and make it a win, win for...everybody.

If you've got a comment, feel free to include it here.  If you want to connect on Facebook here is our advertising agency page and if it's Twitter our agency is @InsightADV or personal @MichaelLibbie

Thanks for coming by... Michael

you may have missed.  You know those sexy political events that just seem to pass us by.  I'll get back to the business of business tomorrow but for now, have a cup of Sunday Morning Coffee but, as always, be very careful...it's HOT!  You can see the entire post by clicking here.  Today:

Thanks for coming by...and have a great Sunday!

The Business Side of Politics

that our firm signed on to work for an Iowa Legislative campaign.  We did this for two reasons:

We've learned several things since November 1 that we believe should be insightful for other politicians and business owners/managers/marketers.  These observations are not only about this particular race but about common issues business and politics face everyday and some ways to fix them.  Ready?

These are just the tip of the iceburg...I could, and will, offer some additional thoughts but...if you failed to read anything else...read this:  Selling is a full time effort across all sorts of channels.  You MUST BE ON YOUR GAME...full time.

To connect, feel free to leave a comment here or on Twitter it's @InsightADV or here is our advertising agency Facebook Page.  Thanks for coming by!

So, What I Learned

This week Des Moines played host to the second 140 Character Conference or The State of Now - Iowa.  Last year I attended to 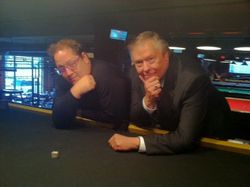 present and then stuck around for a couple of hours. This year I decided to make a day of it.  From 8:30AM to the final act at 5:30 I mingled with people who work in various "silos" calling out to consumers, constituents, friends and customers using Twitter and a host of other social media tools.  So, what did I learn? (Photo: Jeff Pulver founder of the 140 Character Conference.  We're thinking.)

It's OK to have a voice and to share your thoughts and objectives with 140 characters.  What YOU have to say may seem "silly" or "stupid" to somebody...but to another person it matters.  If you're not in the game, you'll never know.

We've used Twitter for years and connected with some amazing people.  Some whom we've never met but continue our on-line relationship.  Recently we've held parties where we invite folks we've not met in person but communicate with on Twitter.  Fastinating.

Yesterday I met four of the most passionate teachers on the planet.  Teachers who have opened up the minds of young people by engaging and encouraging them to use social media to break out of the 1950's and enter the world of...now. Example:  "What adult reads a book and then writes a report?  I asked my students to read a selected book and then blog about some aspect that touched them.  The results were original, thoughtful posts that touched thousands."

Number one reason business rejects social media?  "I don't have time."  Really?  You don't have time to connect with your customers, to learn more about them and why they like (or sometimes dislike) your product or service?  So, you go about doing the same dumb-ass stuff you did a year ago and wonder why it's not working...  Social Media drives business and motivates consumers to become loyal friends.  Does your business have a "chief listener"?

Bottom line:  Social media, done right, with a plan, with purpose and an understanding of the basic "how to" can have a huge positive impact on your business and your interaction with other...humans.  Because real people, at real keyboards are creating real...content.

What did Jeff Pulver @JeffPulver and Deb Brown @DebWorks learn from the days activities?

Take a break and click here for some Sunday Morning Coffee.  We'll get

back to business tomorrow but for today how about some sex, lies and politics.  Not all in that order.  Also some partly personal items.  Here, again, is the link and here are some of the stories from this week:

Thanks for coming by...  If you want to visit by Twitter it's @MichaelLibbie or we can connect on my personal Facebook Page.  Have a great Sunday!

The State of Now - Iowa

If somebody, other than me, suggests you should attend the 140 Character Conference in Des Moines on Monday.  Take them up on it.

You see, I'm not a good person to promote the event.  Why?  Because I know Twitter works and I help people figure out how to improve their ROI when they use Twitter correctly.

So, don't believe a professional like me...but take the word of dozens of others who will be on hand to share their experiences and best practices of using Twitter to gain visibility, market share and sell more...stuff.

The 140 Character Conference is also called The State of Now - Iowa because that's what Twitter is about.  "What's going on...now?"

The event takes place at the Des Moines Civic Center at 8:00am Monday (for good seats).  The cost is $70 for a ticket but if you want to save some $30, nearly half the price, (and DO NOT TELL THEM I TOLD YOU!) when you head to this site to buy your tickets use the promo-code Verizon.  Yep, they are one of the sponsors along with Internet Solver, Country Inn & Suites, Iowa Pork Producers and of course the Civic Center of Greater Des Moines.

I know your company thinks you're doing a hell of a job promoting your product or service and you're happy with your current return on investment.  Well, sort of.  If you could "get more" you would LOVE IT.  But to get more you are going to have to invest in being creative, different and daring.

After you view this video come back.  I want to share some thoughts vital to success.

OK...made you laugh right?  Creative...right?  Viral...for sure.  With over 4 million views the Dollar Shave Club (DSC) has hit a homerun in the marketing world.  But...and this is critical for you to know:  It didn't "just happen".  There was work that went on behind the piece you just saw and a method.

For those of you who wonder if there is a return on investment by using social media let's consider the numbers.  I know that DSC raised $1 million in seed money.  When you are working in the world of retail one million bucks doesn't buy you much.  Not even one spot during the Superbowl.  So, let's say they realized their friend was...technology.  (Which is friendly to most small businesses...if it's embraced.)  Now, let's say they dropped $25K on their video.  That includes writing, shooting, editing, producing, etc. (I do not have independent knowledge so my best guess.)

DSC hasn't let on how successful they have been in converting the 4 million viewers but they did say they had 12,000 folks sign up in the first 48 hours.  IF each signed up for the $3 option that comes to $36,000 a month BEFORE the video went viral.

See, this social media stuff will never work...it's such a fad.

opinion on Sex, Politics, Religion and...Sex.  Did I mention that?  It's Sunday Morning Coffee and inside you'll find a bunch of stuff.  (Our thoughts and prayers to those folks who suffered through the severe weather this weekend....careful out there.)

As always if you wish to leave a comment here you can.  Or let's visit on Twitter @MichaelLibbie or here is my personal Facebook Page.  Have a wonderful Sunday...we'll get back to business...tomorrow. Michael Libbie

I recently celebrated a birthday and that experience presented me with a short lesson in using social media and the ROI business can experience.

In a sense this is very small. But, the fact remains if you use social media to extend the conversation.  To get to know your customers and their wants/needs/desires you...win.

your business.  Coming to Des Moines on 23 April is The State of Now - Iowa also known as the 140 Character Conference.  Dozens of social media types from across the spectrum will take to the stage at the Des Moines Civic Center Stoner Theater between 8:30AM and 5:00PM for a full day of live conversation.

OK..yes I get to speak for 10 minutes...in fact that is the time limit for each speaker (and why we have dozens coming).

Go ahead and mark down the date and if you're already convinced you need a "little extra" push to embrace the social media call here is where you can buy tickets.  I'll share more with you as the date gets closer.  Trust me...it's a solid investment.