The Friday Wrap for Business

Each Friday morning we post The Friday Wrap.  It's a piece that looks at

the news regarding advertising/marketing/branding and includes our commentary.  Here is the link to The Friday Wrap and if you want to leave a comment you can do that or join us on our Twitter Stream @InsightADV or our agency for advertising/communications Facebook Page is right here. Several topics this week:

"If you get it, share it." That's the theme of the Social Media Clubs across the United States.  Last night in Des Moines, Iowa the Des 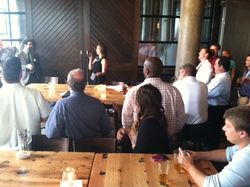 Moines Social Media Club (#SMCDSM) re-launched during a well attended party at Exile Brewing Company downtown.  Lot's of energy, excitement but a noisy environment that made it difficult to hear our friends Mike Templeton and Suzanne Hull as they shared some general news.

A couple of points:

We were also missing some familiar faces but Drew McLellan did make contact and asked if somebody could have a beer for him.

So, what's next?  What are we, they, us going to do next?  Re-launching is fun but now comes the work to get people engaged and excited about "belonging" to "the club".  Will it fit into the schedule?  Will there be meaningful learning and sharing events?  Will we have to say the Pledge, ring a bell and collect dues?

We dunno...but it should be fun to watch and enjoy.  If you've got a comment or question you can leave that here or join us on Twitter @InsightADV or our advertising/communication agency Facebook page is right here.

Comments and Questions and Logos 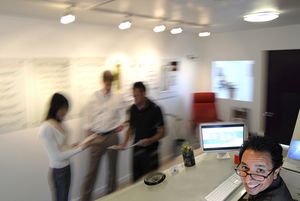 craft of advertising. It really is a craft. We don't make a thing other than create messages and ideas that drive consumers to our client's products/services. Like with any serious craft what we do takes time which is why I need to share this story.

One of the most commented on pieces we've posted is "How Much For A Logo?". It seems lots of people are interested in how much it costs to create a logo. Most of the comments have come from internet companies who make it their business to design cheap "off the rack" logos and they use our traffic to push their website.  It's something that we deal with all the time and we usually delete the comments and mark them as spam.

However, on this post we decided to leave most of the comments intact. For no other reason than to share with you our strong belief that buying cheap is...cheap.  In our original post we said "...we don't know how much a logo will cost a client because the cost has so many variables". We think a custom logo that is built around the client is much better than buying a "stock logo off the rack" that might be in use in many other places. But, hey...that's us.

OK, this will not be a PC post.  Our friends at Hardees and Carl's Jr. need to shore up support from young males so they cooked up this new "Memphis BBQ" TV piece called "BBQ's Best Pair".  Clearly it is...targeted.

Beyond the targeting of the message I hope you paid attention to the work that goes into creating a high quality television commercial.  Notice the equipment, the attention to detail...all for just 30 seconds.

So, our question to you is this: When you're spending money to showcase your product/service on television or in online videos don't you think it's important to spend an equal amount of time and energy in the creative?

Posted at 07:24 AM in Advertising, Creative, Television, Video | Permalink | Comments (1)

It's The Message Damn It!

Let's play a game.  Let's say you have a boat-load of money and you're going to design a campaign to reach millions of consumers.  What do you do?  Do you look to the past for success or do you inspire with a message about today and...tomorrow?

Go ahead think about it.

We would bet on the message regarding today and tomorrow vs. a nostalgic look backward and that is exactly how consumers are betting when it comes to sales of General Motors vs. Chrysler.  At the center of this is the General Motors campaign "Chevy Runs Deep" vs. the Chrysler campaign, "Imported from Detroit".  Consumers seem to be more in tune with a forward looking message rather than history.  Want some proof?  Here is a great article from our friends at Advertising Age that goes deeper into the story.

OK, so you don't have "boat-loads" of cash but you want to bump your sales.  What do you do?  We think you share a vision.  Borrow on the past for support but don't spend your entire budget telling folks how great you...were. Offer up a back-drop of being real and then how your product/service can look back but offer a better future.

Nostalgia is nice for antique stores...