Coffee-Mate. Never bothered asking the local Hy-Vee about it because I figured it would show up sooner than later.

Three weeks into the "Amaretto Coffee-Mate Drought" I popped off a Tweet to @Coffee_Mate who responded, timely by the way, "We're sorry but Amaretto has been retired why don't you try..."

WHAT?  No Amaretto Coffee-Mate?  My mornings were going to from sleepy to sad...very sad.

Over the past couple of weeks I Tweeted my disdain to my former friends @Nestle and @Coffee_Mate. Ya know, photos of the Coffee-Mate section without Amaretto. A friend of mine even chimed in with #FreeTheAmaretto for Twitter.  The brand was sorry for my troubles and suggested that maybe some new "Caramel and Coconut Girl Scout" flavor might be a replacement. What?  Who thinks of this stuff?

This past Sunday I included @Hy_Vee in my tweet...moaning about the loss of the Amaretto flavor. Within a few minutes I get a Tweet back suggesting that I send an email to hvcs@hy-vee.com with my concern. Told them the flavor was retired but went ahead and sent an email anyway. On Sunday! Within the hour I got a response...from a real person...with a real name and a real email address. 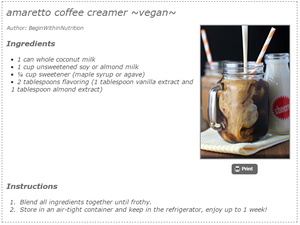 Shocked!  Who does this?  What no Bot response...but a nice note from Kourtney?

I responded back...just to make sure it wasn't a Bot and she wrote back, "You’re most welcome Michael! We run a 24/7 operation here so if you ever have any store requests or Fuel Saver inquires there will be someone here to take care of it!"

Oh...so what did I do?  Made my own!  Another friend on Twitter supplied me with this recipe and BAM we're in business...and, of course, I picked up the ingredients from..."My Hy-Vee".

Welcome to Des Moines Price Chopper...you've got some work ahead of you.

How To Buy Stuff - Chapter Two

My friend and I have been working on a book idea.  Both he and I believe 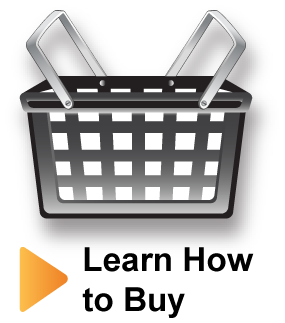 there are enough "How to Sell" books.  What business needs is a book on "How to Buy Stuff".  Tips on how to move your business forward by paying attention to sales and marketing...not yours...but "The Pitch" and then how to and how not to take action.

Chapter Two, we've decided is "How Not to Allow Deadlines to Assist in Not Buying". Ready?

Here is the set up: Let's say you manage or own a business and every day of the week you are called on to listen to a pitch. (Here's what I think about your duty to listen to every one!)  When the pitch is complete you say to the salesperson, "This is fantastic! It's exactly what we need. Let me get back to you in a week."

Then the week goes by and the salesperson, who has kept in touch with you during the week hears nothing back. Crickets!

The day comes and the salesperson finally catches up with you and you say, "I know today is the deadline for the offer but, I just can't get it done today.  I'm sorry!"

So, we went from "Gotta have!" to "I don't have time to put my signature on a document."

The customer used the deadline to help him/her fail to follow through with the buy.  Sad.

What should happen is the buyer, during one of the interactions between the pitch and the deadline, should have said was, "Look we considered this but, in the end, it's not going to work for us because..."  It's important the salesperson hears the "Why.." because perhaps the objection is something you just don't understand.

Or...you just made up your excitement during the pitch which is phony and not a good way to do business.

Most small, or owner managed, businesses simply don't have the resources 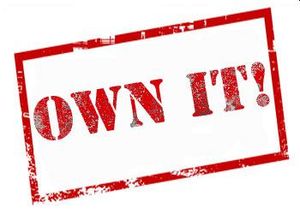 to cover all the media bases available. So what often happens is they "dabble" in several.  A little money goes to print, a little goes to radio, a little goes to television.  Then they add the "free stuff" the many social media platforms thinking they must be on everything because so many people use social media.  So they dabble in Facebook, Twitter, have a Blog, maybe Pinterest maybe LinkedIn.

Dabbling rather than owning their space.  And, by dabbling they are hearing a great sucking sound and not much impact from their advertising. Spending lots and not getting an ROI.

If any of this sounds familiar.  I get it.  That's why you need to alter your marketing and "Own Your Space".

Once you identify where your target demographic is hanging out get in there and don't just "dabble", own it.  If it's print (newspaper) be there several times a week.  If it's radio be there in a rotation that will make it seem like you own the station. If it's television don't buy just one newscast...buy as many as you possibly can. But...do not DABBLE.

Here's how you start.  Right now add up all the advertising you are currently doing:  Radio, Print (Newspapers to "Neighborhood Magazines"), Professional Online Listings, Trade Shows, Billboards, Google Ad Words, etc. The Chamber Membership that has never brought you a dime. Even include the High School Sponsorship you've been doing for ten years after your kids have graduated because you feel "a relationship".

Bet it's a pretty good chunk of change.

Now pick a media, one that is in concert with your target demographic, and "own your space".  Learn how to say "no" to everybody else until your seeing measurable ROI.  Then, and only then, move on to another media.

One other thing.  If you are "owning your space" in whatever media you use, make sure you alter your message.  Stay with the over-reaching theme but change things up so folks don't get tired of what you are saying.

Let's talk LinkedIn!  I get it, you have a LinkedIn account because you are 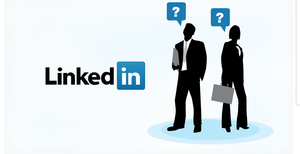 in business and, no doubt, you want to sell more of your product or service. So, connecting with market leaders, buyers and others in business just might help you do just that.  Except it ain't happening.

Let me see if I can help with some tips to enhance your LinkedIn success:

I was just like many of you...I didn't "work" LinkedIn.  Over the past two months I have and I have seen engagements increase by 50%.  Like everything else in the social space it takes work.

Honest, just want to help!  Now, head to your LinkedIn account and get busy with it.

The Folly of Digital Start Ups?

I am about to peek behind the curtain.  You know, that old bit from The 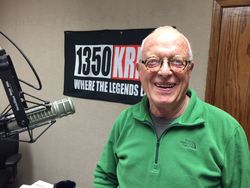 Wizard of Oz, "Pay no attention to the man behind the curtain!"  This is not intended to cast doubt or to discourage our digital start-up community. It is intended to point out that the goal of business is to produce a profit. Making money, we would think, beats out the latest "wowza web-based, app infused techno company".  Stay with me on this.

Over the past several years I've asked dozens, if not hundreds, of "digital dreamers" if they are making money.  I get answers like, "Not yet but soon." or "I'm doing this for the love of creation." or "We're building it to sell and that will come."  Meanwhile they compete for angel investors, first round financing and the attention consumers with an ever growing array of tech choices.  The work, the dedication and the dream are all celebrated...but who is making money?

Meanwhile, Jack Mathews, the close to 80 year-old newspaper guy who retired two decades ago, gets bored. He sees opportunity with a hyper-local news site.  Our Grinnell launches in 2007...long before folks knew what "hyper-local" meant.

Last year Jack went back to publishing a newspaper (yep...a NEWSPAPER!) that shares the back story of economic development. The Grinnell Business Journal started as a quarterly, now is published every two months.  The goal, says Jack, "Is to make this a weekly business news publication."

One other thing, Jack is turning a profit.  And he's doing it with an old school media piece called a "newspaper".

Just like my friends that are in digital design he has passion.  He has, just like they do, talent and knowledge of the business.  He also has a product that is tangible, familiar, usable and adds value in a space that is not currently covered.

We just think it's a great story and something for business to think about. How can you add value to a niche of consumers that are under-served?

So, What's The REAL Cost?

We'll listen to any pitch. We've always thought that if you don't you run the 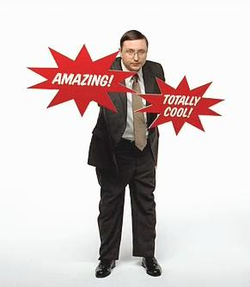 risk of missing out on the magic bullet that will drive customers to our clients. That's also a tip for you. Don't just wave somebody off.  Listen to the pitch; who knows, it might be magic!

We recently listened to a pitch about some online marketing.  It went like this: "Our customers get 70,000 impressions each month and it's only going to cost your client $500 each month."

Sounds like a heck of a deal right? Less than a PENNY per impression! But then you do the math: 70,000
impressions, divide that by their stated "click through rate" of .03 percent. That comes to 2.3 page views...before the industry standard conversion rate of 8% (Conversion rates mean converting a "looker" into a "buyer")

Marketing Tip:  Impressions do not mean sales. They mean impressions like in, "Oh, I see that."  Getting the consumer to then DO SOMETHING and convert them to becoming a buyer is a whole different discussion.

Not really, but it sometimes seems that way.  Our craft is advertising and 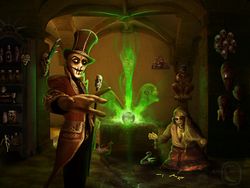 marketing; getting more people to know who you are and then purchase your product or service.  How?  By creating well crafted advertising and marketing plans. We don't do what you do...we do...voodoo. We even tell folks that we do it. Have a listen:

Look, if you're happy with the return on your advertising dollars stick with it. But, if you would like to increase your ROI let's talk.  We'll share with you marketing methods, why they work, what we think you should do and how you can measure success.

We're Insight Advertising, Marketing and Communications a full service advertising agency.  Let us do some voodoo for you...too. 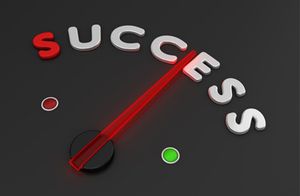 The question your business should be asking is this: "Am I spending my advertising to be memorable or to move the sales needle?"

We hope you want more...sales of whatever you you are selling be it product or service. Here's a great example of something memorable:

No matter if you loved it or hated it...you remembered it. The problem was shipping for KMart actually went...down that season and so too did sales. The ad was memorable, funny, it was shared and commented on but...in the end...it didn't work.

In fact this past year Sears Holdings (Who now owns KMart) shut down 234 store locations that were under-performing most of them were...you guessed it, KMart.

What went wrong?  KMart, over the years has lost its identity.  Add to it that people are shopping differently and most "big-box" stores are seeing that result.

The point of this post is that you not only need to be memorable but also you've got to sell stuff.  You need to ask for the sale.  You need to demonstrate how, whatever you are selling, can benefit the consumer and then you need to follow through.