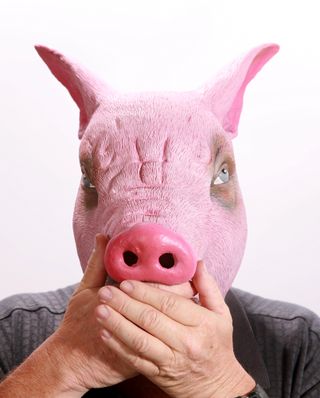 In the rush to whip the planet into hysteria the media clung to a CDC statement early in the H1N1 frenzy that this new strain of flu had some traits associated with "swine flu".

And the world went nuts.  Zoos (Baghdad) killed their wild boars,  Egypt ordered the slaughter of all 300,000 head of hogs in the country.  This week China...that paragon of virtue (melamine in dog food, lead in paint...) banned the import of US pork.  It seems they and Russia and others "think" humans can contract H1N1 by eating the stuff.  Meanwhile, according to Bill Northey the Secretary of Agriculture for Iowa this panic is costing US pork producers $2 million...a day.

And...the media?  With eyes wide open and in their best Eddie Haskell voice say, "Who?  Us?  We were just reporting."

But, is there the rush to correct the story?  No.  Oh, to be sure there was, here in Des Moines, an article in the Des Moines Register on May 6th by the farm editor an impact story...but the article didn't carry the same excitement and weight as bold headlines declaring a national pandemic caused by hogs.

Too little....too late for pork producers that have already seen tough times in the markets.  Too little too late to impact world view.  Too little too late...when just yesterday in an ABC radio news program there was yet another mention of "swine flu"..somebody just didn't get the memo.

Meanwhile the "anti-meat" crowd is loving it.  Bloggers are having a field day pushing the story and the false link:  "Meat...kills!"

So little guys like us write about it or we'll do radio interviews about the truth...  But it's a big hill to climb.  One that is littered with the rush to sell papers and spin audience numbers...after all it's rating season.  A little more help here folks?

What Is A Guy To Do? 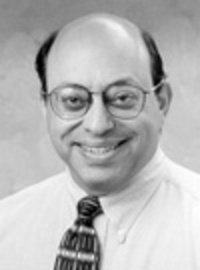 This is my friend Gary M. Levenson, MD.  Gary is the senior physician for the pulmonology group at Mercy Medical Center of North Iowa located in Mason City, Iowa.

I spent several hours with Gary and his family this past week and we talked about his recent honor of being published in the Mayo Clinic Proceedings which is a peer reviewed journal sponsored by that most prestigious of hospitals.

He gave me a copy of his article, Intrapleural Fibrinolytics Combined With Image-Guided Chest Tube Drainage for Pleural Infection.  OK, I admit...by just reading the title I had only a vague idea of what his landmark study was about.  He was able to fill in the rest during our visit and it is exciting stuff.

I then told Gary about the world of the Business and Medical Blog and suggested that he give it a try.   Well, I know Gary only too well so I decided to do the Blog for him.

The reason?  Well, what is a guy to do to prove the power of the Blog?  I hope to allow others out there to be able to notice his work and get folks in other professions to understand the potential of the blog.  Thanks, Gary for the information and the time we shared together.

Pull People Out Of Advertising Too?

Advertising is a 130 billion dollar a year industry.  (Right now some of my clients are checking our recent billing statements and giving a collective sigh of relief, "Whew...not me!" they intone.)  Depending on who you learn from the average American is exposed to 2,500 to 3,000 advertising messages each day.  (This is all great information when starting up a conversation at a party...honest.)  So, advertising is a big business...and it is also politically correct...sometimes.

Today I read in the Des Moines Register that CareerBuilder.com (Think BIG on-line job site) is going to discontinue their television advertising campaign that features chimpanzees.  Scientists at the Great Ape Trust (ahhh..here in Des Moines) are commending the move and say, "All great apes deserve to be treated with dignity and respect.  The depictions of apes in entertainment misinform and reinforce negative and incorrect stereotypes."  I will pause here to allow you to read that again. (Pause)

I'll miss them...the Chimps that is.  I LOVE advertising messages that feature animals...but my favorites are Chimps, Apes, Gorillas...maybe because they are more interesting than humans?

But, here is the point of the story:  So, when will we give the same "dignity and respect" to humans?  Consider the following advertising stereotypes:

Awake America!  It is time to take not only great apes out of advertising it is also time to remove any vestige of humans from TV, Print, Internet, Radio, Display advertising.  Just show the product for crying out loud!

If not preserving "dignity and respect" it will at least cut down on talent fees!